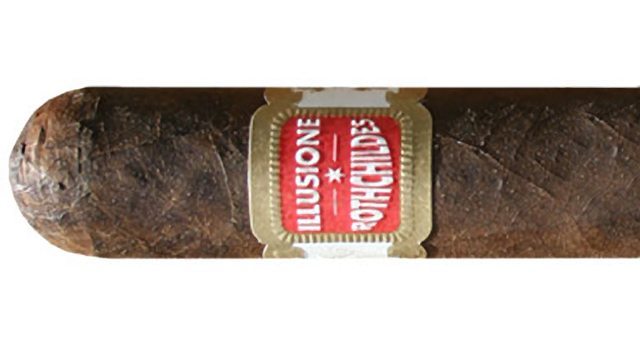 “Not the prettiest cigar but it does look to be rolled with considerable care. The triple cap is virtually seamless and the color all but uniform from foot to cap.” –Milton (mjohnsoniii)

“The aroma of this cigar got me excited as it was reminiscent of mixed sweet spices, coffee and leather. There were also earthy flavors like hay and grass.” –Sandeep (Djangos)

“The cigar felt strong and stout for its size. It was firm but gave a little when squeezed. The veins were noticeable but the wrap was even and tight. Unfortunately, the wrapper did not seem to make it the entire length of the cigar because the binder was showing slightly at the foot because the wrapper looks to have been cut too short. To top it all off was a nicely applied triple cap that punched nicely and presented a very favorable draw.” –Will (Dubv23)

“This cigar opened wonderfully. It presented a nice complex and rich array of a spicy baked bread and coffee. There was a sweetness that lingered on the tongue between puffs and could be tasted on the lips. It was a well balanced beginning that grabbed my interest.” –Will (Dubv23)

“Very rich and fairly strong. Heavy flavors of cocoa and espresso are dominant here with a nice bit of pepper to round things out. Quite nice.” –Myles (MylesT)

“Pepper is still there with the cedar, but there is cocoa and an espresso like flavor becoming more present.” –Ian (Sp@rky426)

‘Nice, creamy smoke is billowing from this stogie. At the beginning of the second third, it began burning a bit uneven but eventually fixed itself. More earthy-type flavors start showing up like hay and grass along with strong tobacco notes which were very prominent.” –Milton (mjohnsoniii)

“As the cigar progressed, the pepper is definitely fading again to the back of the throat and also in intensity. The flavors are mostly the same with the earthy flavors in the forefront. Mostly hay and grass predominate. Every so often there is a whiff of something sweet that I am unable to place since the other flavors are much stronger. The mild pepper persists to the very end of this third. The burn skewed slightly in this third but no touch ups were necessary and there was no tunelling or canoeing. The ash held past the midpoint of the cigar before falling off. The smoke volume also increased significantly towards the end of this third.” –Sandeep (Djangos)

“The final third becomes a little edgy as the smoothness dies down. The coffee turned darker. A nice dark coffee been flavor though. The spices are the same. Baking spices…not too peppery but very complimenting. The chocolate even lost its sweetness and became a little more bitter like dark chocolate. I guess this is where the heat got to the flavors and they transitioned. Thankfully it was not harsh nor bitter and the flavors turned to develop character and add a different dimension to the smoke.” –Will (Dubv23)

“This is definitely my favorite third. Cocoa and baking spice still, but with a rich, creamy core. It’s like really good Mexican Hot Chocolate, with a shot of coffee dropped in!” –Myles (MylesT)

“The resistance on this cigar was perfect. Not hard to draw from but required a bit of effort.” –Milton (mjohnsoniii)

“The burn was excellent for the most part. There was some skewing in the second third but did not require any touch ups. It corrected automatically without any tunneling or canoeing.” –Sandeep (Djangos)

“While this is not something I would seek out for its profile, the vitola is perfect for my schedule and the flavors were decent.” –Ian (Sp@rky426)

“This cigar, in my opinion, was nothing short of outstanding. I venture to say that it had a Cubanesque profile which is quickly becoming a favorite of mine. When I grabbed it from the humidor, my first thoughts were, “This one is either an ISOM or a budget-friendly stogie.” Either way, I was pleased with the outcome. I can see this being a mid to upper-tier cigar that I would absolutely welcome the opportunity to smoke again.” –Milton (mjohnsoniii)

“Overall, the cigar was pleasant and smoked well. If earthy flavors are your cup of tea then you will most likely enjoy this very much. Also it is very unilateral without much progression in the flavors. I would definitely give this another go but the flavor profile is slightly different from what I enjoy myself.” –Sandeep (Djangos)

“I was expecting a milder smoke than I received from the initial look of the cigar, but I was pleased to find a cigar packed with great flavor. It was not overly complex and delivered an experience based around simple core flavors but it did it well. Construction was top notch as well leaving me with a cigar that need not to be tended too, just enjoyed. My first guess was a Perdomo Lot 23 but toward the end I was leaning more toward a E.P. Carillo Cardinal Natural.” –Will (Dubv23)

“I’d gladly smoke one again. I don’t know that I’d want or need a full box, but it’s something i’d like to keep a few of on hand. I have a hard time nailing down nicotine content, but this seemed strong to me, without being crazy. Long, slow burn.” –Myles (MylesT)