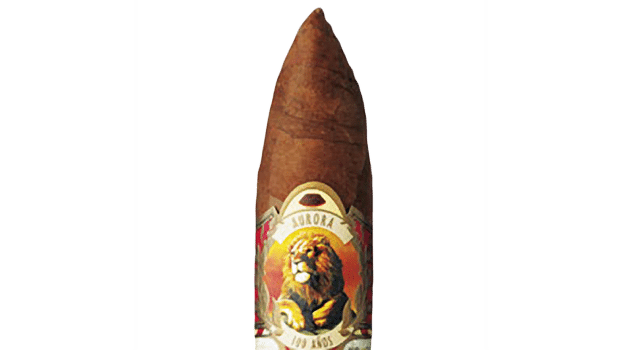 “I get scents of chocolate and caramel mixed in with tobacco flavor.” –Craig (WyldKnyght)

“Construction looks great all around on this solid torpedo. It’s very firm with no soft spots.” –Emmett (rhetorik)

“From the first puff, I like it. There’s wood, cashews, sweetness, hints of cedar and leather, toasted marshmallow, and just a little ligero kick. At about an inch in, the sweetness tastes distinctly like a sugar cone, like you’d get at Baskin Robins, and there’s a touch of clove spice as well. The smoke is thick and creamy. I’m loving this one.” –Derek (StogieNinja)

“Nice basic flavors to start, a little black pepper, lots of leather and cedar. After the first few puffs I start getting a nice citrus flavor added in. Very nice. Towards the end of the third, the flavors have shifted into what I would describe as cinnamon toast without the sugar. Creamy, bready, buttery with some spice. The finish is short and dry.” –Emmett (rhetorik)

“Initial draw, very light, mellow, wood and hay flavor. Pepper started to come through after a couple puffs and strength increased. Burn was uneven and needed a couple touch ups to get going. Ash was a light grey almost white and started to split from the end. Lots of creamy smoke.” Craig (WyldKnyght)

“At the start of the second third, its distinctly nutty, with dry wood and some sugar cone sweetness at the front. There’s a bit of pepper and baking spices in the background, along with a bit if leather and cedar, and there’s still hints of that ligero kick, but all are quite tame, and this remains a pleasant, creamy smoke.” –Derek (StogieNinja)

“At the start of the second third, I get some more interesting flavor transitions. A definite nut flavor and some hints of baking spices. Underlying tone is pretty woody at the moment. The finish is still a little papery, but becoming more peppery.” –Emmett (rhetorik)

“Wow what a shift! Almost as soon as I hit this third, flavors had a major shift to pepper, clove and another spice I can’t name. Nicotine is coming in this third. Almost like a different cigar! Then half way into the third, just as fast, it shifted again, back to the original flavors of the first third, with maybe a wee bit of cocoa. This stick kept me on my toes and guessing what I was gonna find next!” –Robert (NavyPiper)

“The clove spice has picked up a notch, as has the dry wood. Still lots of nuts and a little cream, and all the rest still remain to round out the flavors.” –Derek (StogieNinja)

“The draw for me was absolutely perfect, couldn’t ask for any more!” –Robert (NavyPiper)

“Never wavered more than 1/4″ and never burned hot or harsh. Would rest for a minute without issue, and ash held solid for an inch and a half.” –Derek (StogieNinja)

“Overall this was a good consistent cigar, other than the burn issue. There was lots of creamy smoke and smooth flavors of wood and hay. I would give this cigar another shot.” –Craig (WyldKnyght)

“I really liked this cigar. It had good flavors, and it kept me guessing what I was gonna experience next. It grew in boldness, but never overpowered me. The nicotine kick was enough to let you know it was there, but again not overpowering.” –Robert (NavyPiper)

“Very enjoyable. If I’m going to smoke a lighter shade, which I rarely do, this is what I’m looking for. Sweet, creamy and nutty. Definitely recommended, and I may be looking into acquiring more of these.” –Derek (StogieNinja)

“This was a pretty good, if not average cigar. There was nothing wrong with it, in fact it performed very well technically and had some nice flavors but just didn’t have that something special to make it interesting. I would not be surprised if this was an Altadis or General cigar.” –Emmett (rhetorik)