Ernesto Padilla’s resume is well known among cigar enthusiasts. This artist, turned master blender, is responsible for many high rated and decadent blends that grace the humidors of aficionados across the globe.

Padilla Small Batch is a perfecto that instantly displays the amount of care and craftsmanship that went into this robust cigar. This tasty jewel comes draped in a sweet, spicy Ecuador Sumatra wrapper from the 2003 crop with a Honduras Talanga binder from 2003 and a blend of well-aged Dominican Piloto, Brazilian Arapiraca, US Broadleaf, and Honduras La Entrada.

“This was a very nice looking, and unique cigar. The shape was interesting and surprisingly felt comfortable in the hand and wrapper appears to be made of high quality leaves and showed minimal veins and barely visible seams. The cap was nicely applied.” –Jason H. (Jokey Smurf) 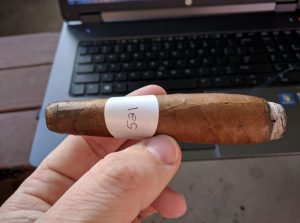 “Wow! What a change from the last cigar I reviewed. Plenty of wood, peanut & milk chocolate flavors just pouring out.” –Mickey T. (irratebass)

“Cream, Dominican tobacco, leather, dried pecan wood, peat and vegetal notes on the exhale. Retro is white pepper, cream and minerals. Draw was wide open on the prelight, but is performing nicely in the first third. Burn line is a little wonky, but with this shape of vitola it is sufficient. Finish is clean, and towards the end of the first third.. cream is the alpha and is ramping up in the profile. Ash is firm, no flowering. Classic medium profile on medium body.. no complaints.” –Matt C. (Big Matt)

“As I entered the 2nd portion of the cigar I noticed that the pepper faded and the milder, subtler, baking spices became more apparent. The espresso faded as well, unfortunately, but I really enjoyed the earthy spices that remained.” –Jason H. (Jokey Smurf)

“Cinnamon, nutmeg, cream, charred wood, and tobacco; the vegetal and mineral notes take a back seat but are still present and enjoyable. Ash is like damn Fort Knox and it ain’t budging. Some stone fruits make a presence but have not yet formally entered. Retro is straight cream with red pepper flirting but not overpowering. There is a chance this cigar has been resting for 5+ months as the profile meshes in harmony. Multinational blend with Dominican tobacco in the filler. Finish is clean and I may be able to sneak a kiss to my better half, post cigar. ” –Matt C. (Big Matt)

“Fantastic smoke through & through, I have a feeling I know what this is, but I will wait until the reveal, and I’ll probably be wrong ha.” –Mickey T. (irratebass)

“Peat, vegetal and mineral notes begin to ramp back up, we still have cream, cinnamon, Dominican, nutmeg, and charred wood on the exhale. Grass jumps in periodically, stone fruit is nowhere is site. I finally ash the cigar in the final third in fear it would dump onto my laptop.” –Matt C. (Big Matt)

“The draw was a little tight, and that might have been my fault since I punched it, and then straight cut it in the final 3rd. It opened up a little bit after that though.” –Mickey T. (irratebass) 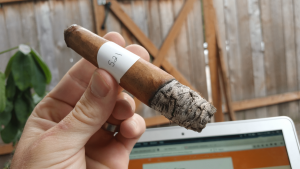 “Unbelievable burn, the ash held on for about an inch and I had to tap it!” –Mickey T. (irratebass)

“The ash this cigar held over that large lump was just simply amazing.” –Wes (SosaCub4Life)

“Had a great time smoking this, would like to grab some more. I don’t think it’s an everyday smoke by any means, but definitely one of cigar you would reach for if you were wanting something different & unique.” –Mickey T. (irratebass)

“This was a damn good cigar. It was full enough to keep me puffing, but mild enough for an adventurous noob to stretch their horizons. I’ve seen one other cigar that looked like this, so maybe I can guess what it is, but I can assure you that I’ll have more of these when the reveal happens!” –Jason H. (Jokey Smurf)

“I wouldn’t be surprised if this cigar is readily available everywhere, the mold probably cost a pretty penny making me think it is mass produced. Regardless it is a very good cigar with Dominican tobacco not overly used, but just right. Normally this is not a vitola I would reach for and at the right price I could see myself having 10 of these on hand in my personal humidor. Try this cigar if you haven’t. Kudos.” –Matt C. (Big Matt)

“Overall this cigar just wasn’t for me. I did like the very unique shape and the construction was amazing.. however.. the flavors didn’t do it for me. I enjoyed the nice simple peppery spice throughout but that was about it.” –Wes (SosaCub4Life)