Partagas releaesd one new cigar at the 2018 IPCPR show, the Partagas Legend. It pays tribute to five important men in the brand’s history. The Partagas Legend is in honor of: Jaime Partagás, Ramon Cifuentes, Edgar Cullman Sr., Daniel Nunez and Benji Menendez. 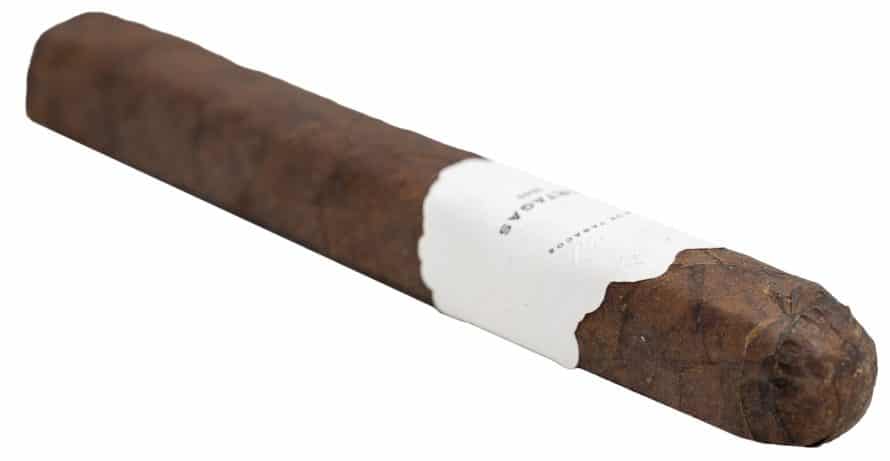 “Dark reddish brown with some rough spots and prominent veins. Appears to have been box pressed. Two edges are definitely more obviously pressed and two are more rounded. Odd. I’m rating this higher than it may merit based on the fact that it’s in the neighborhood of a corona, or corona grande. This is my favorite neighborhood.” –John I. (John I.)

“There was a slight barnyard aroma along the length of the cigar with a note at the foot that reminded me of Andes chocolate mints.” –Isaac M. (The Nothing)

“There is an initial hit of campfire smoke on the first few puffs of the cigar. It takes a little bit to bring anything else into it and I was afraid it was going to be a little flat. There is a brief hint of black pepper and then some dark chocolate and leather finally appear. It’s actually a smooth smoke and the predominant flavor is the Smokey tobacco.” –Diana (ArmyRN)

“Right away, I am getting a bold pepper flavor that mellows out after a few puffs. I am having a hard time identifying the flavors on the draw but I do know they taste good. On the retro I am getting a strong black and finishes with a ginger like zippiness. There is also a flavor I cannot identify but reminds me of fire cured tobacco. ” –Daniel S. (Daniel S.)

“The second portion of this sample remains relatively full strength and has the cedar leaving while a peaty earth note has developed. The smoke is still full of spicy black pepper though and is fully delicious.” –Jason H. (Jokey Smurf)

“The wood notes continued on strong into the second third but included some flavors of green peppercorn and charcoal. The strength of the cigar also began to make itself known at this point with a tingle forming on the tongue.” –Isaac M. (The Nothing)

“The final portion of this sample saw the pepper fade and a hint of bitterness creep into the flavor profile. On the while the flavors are still quite good but not the flavor bomb that it started out to be.” –Jason H. (Jokey Smurf)

“The cigar seems to have plateaued in the second third and now has less flavor for me. The chocolate has come forward more but just isn’t popping the way I was hoping it would. I definitely didn’t nub this cigar as I lost interest and the flavor just fell off for me at the end.” –Diana (ArmyRN)

“A really nice draw, particularly considering the size. As a result I was able to get tons of flavorful smoke which is a treat. ” –Jason H. (Jokey Smurf)

“The cigar burned great from the start of the finish. Sometimes it got wavy but never out of control.” –Isaac M. (The Nothing)

“A little rough looking, some rugged veins that looked like scar tissue, and it felt like it might be a little bit light and under-filled, plus the odd half pressed appearance. Guess what. None of it mattered. Function was just fine, no significant burn issues. Not pretty, but perfectly operational where it counted. ” –John I. (John I.)

“Exceptional smoke in my estimation. Reminded me quite a bit of a Padron 1926. Big flavor, powerful, lots of smoke. Great flavors of chocolate with some background spice and sweetness. Not really a lot of transitional flavors, but the core of this was so enjoyable I really wasn’t interested in going anywhere else. I enjoyed every second of this, and I’m ready to go buy a bunch more. ” –John I. (John I.)

“A really nice corona cigar for a chilly California morning. This had the flavors and performance that I hope for in a cigar…I think want some more of these!” –Jason H. (Jokey Smurf)

“This cigar is all wood, and I would reckon a lot of ligero too. It packs a bit of a punch. There was a lack of interest though as it is fairly one note throughout, and once that nicotine starts hitting the palate, it covers up the flavor.” –Isaac M. (The Nothing)

“The cigar lasted about 40 minutes but overall I enjoyed the cigar. At first I didn’t like the fire cured tobacco flavor. After a while I was starting to get a taste for it, especially when it was balanced out by a sweetness that would pop out through the cigar.” –Daniel S. (Daniel S.)

“This was a flavorful yet flat cigar for me. I wanted the flavors to pop more and it just couldn’t get there for me. The mix of Smokey tobacco, dark chocolate, leather and cocoa were nice but it just wouldn’t reach where I wanted it to. I would smoke it again to see if it was any different and it would be a pleasant nonetheless but just not at the level I truly hoped for.” –Diana (ArmyRN)

Blind Cigar Review: Partagas | Legend Corona Extra Leyenda
Summary
"Exceptional smoke in my estimation. Reminded me quite a bit of a Padron 1926. Big flavor, powerful, lots of smoke. Great flavors of chocolate with some background spice and sweetness. Not really a lot of transitional flavors, but the core of this was so enjoyable I really wasn't interested in going anywhere else. I enjoyed every second of this, and I'm ready to go buy a bunch more. " -John I. (John I.)
Appearance
90
Aroma
90
First Third
89
Second Third
89
Final Third
88
Draw
90
Burn
89
Construction
89
Overall Experience
90
89
Good