“This panatela sized cigar had a nice smooth shinny colorado maduro colored wrapper. There were some thin to medium sized veins and a nicely place triple cap.” -Craig (WyldKnyght) 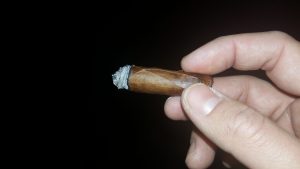 “For the first third, pepper- pretty strong at first, then easing up a bit, tobacco, spice, and a mustiness round out the flavors. The pepper is definitely the Boss of this third. Nice overall flavor unless you take too big a puff and get an overload of pepper that will scorch your nose hairs! LOL! Ash was pretty tight, and lasted close to 1 1/2″. Burn is straight, and the draw is perfect! Bring on the next third!!!” -Robert (NavyPiper)

“This cigar was easy to light, the initial flavor I got was that of nuts. As it went along some pepper start to creep in.” -Craig (WyldKnyght) 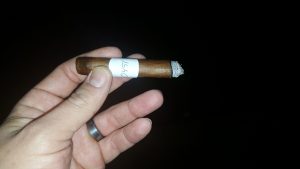 “The char flavor is still taking over most of the profile. The second third burns a little hotter and quicker than the first. There is a subtle oats and honey finish and the retrohale is full of pepper. The burn is quite nice but the overall profile is turning harsh.” -Steve (ThaGreatWazoo)

“During 2nd third the spice has faded and now its more sweet. Picking up lots of nutmeg. I can feel the strength picking up during this third.” -Ashley 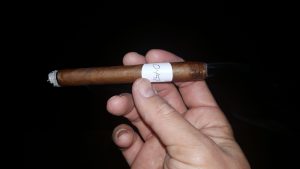 “The final third saw the the pepper mellow out and the cedar flavor come to the forefront. The was a chemical flavor on the tongue” -Craig (WyldKnyght)

“The draw on this cigar was very nice and had a good amount of smoke.” -Steve (ThaGreatWazoo)

“The burn was fairly even with a little waviness” -Craig (WyldKnyght)

“THe only real construction issue I found was the tightening of the draw in the latter half of the 2nd third, then really snugging down in the final. But that was it.” -Robert (NavyPiper)

“At first when I tried the pre-light draw which I don’t hardly ever do and got that mild chlorine taste, I was praying that it wouldn’t be there while smoking. And by golly I never tasted it again. Whew, what a relief! But it was a nice stogie and one I wouldn’t mind having again in the future.” -Robert (NavyPiper)

“Although not something I truly enjoyed, I’m sure other wouldn’t mind it. The flavor was ok, would have been better without the harshness during the second 3rd, and chemical taste during the final 3rd.” -Craig (WyldKnyght)

“This cigar overall just did not do it for me. The overall charge flavor was off putting once I got into the second third. I think with a little bit of time these might develop a little bit more, but I’m not going to hold my breath. It was unfortunate based on the nice appearance of the cigar.” -Steve (ThaGreatWazoo)

“It started out with some spice and then transitioned more into the nutmeg and all spice. The final third mellowed out. The strength did pick up as the cigar went on.” -Ashley