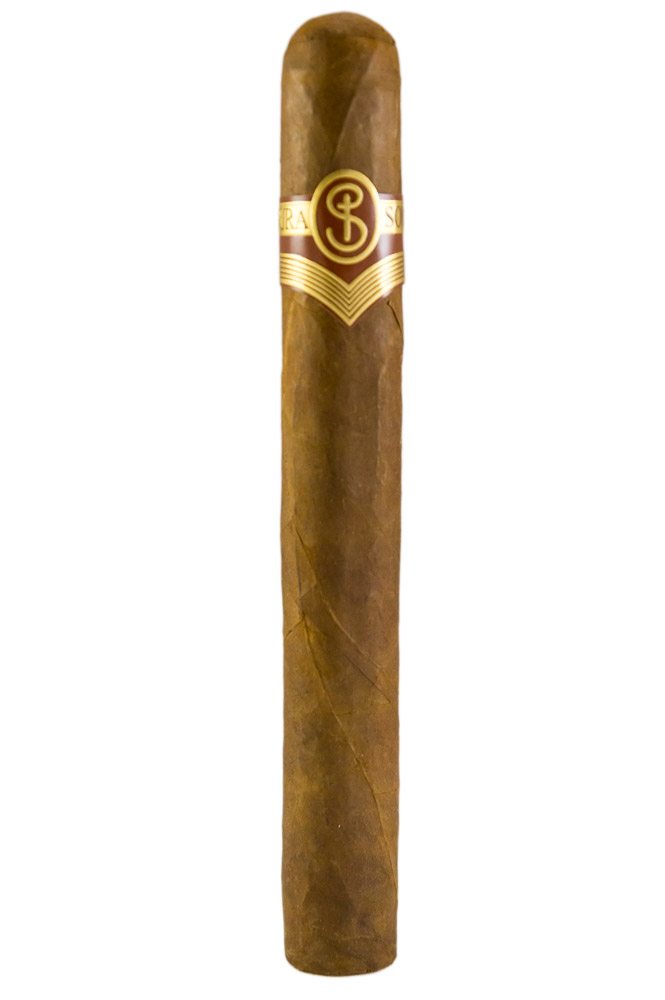 When sending us these samples, Robert Wright was kind enough to include some info on these new cigars. He said that this is a Nicaraguan made cigar, made at the Christian Eiroa’s Fabrica Unidas. The blend uses several Nicaraguan tobaccos from different farming regions. The diversity of tobaccos and taste that grows in Nicaragua is the reason why he chose Nica. The wrapper he chose is one of his personal favorites in terms of taste and aroma.

His goal was to achieve a blend that offers complexity in taste, full flavor, but not necessarily full bodied. Most importantly, balancing each flavor is extremely important to him. The combinations of spice, hint of sweet pepper and a creamy finish, instead of dry, were his intention.

“Coffee with leather,and a light musky sandalwood smell that has me eager to light it.” –Ron (shuckins)

“Medium firm in consistency throughout with no soft spots. The veins are quite easily felt. The surface is slightly bumpy as well. At least two caps are easily discernible.” –Sandeep (Djangos)

“Some pepper on the initial few puffs that faded allowing the coffee and leather to come through. Lots of smoke and white ash makes this a promising stick. Tasting a hint of earthiness in the background.” –Gregg (McGreggor57)

“There was strong spice at the initial light that was really noticeable on the retrohale. It kinda tickled the nostrils. I also tasted a very small hint of something sweet but couldn’t quite distinguish what it was. It was tasty though. Coffee notes began to show through well into this third with bits of raw leather and more spice.” –Milton (mjohnsoniii)

“Getting a bit of heat from a taste of allspice that has a splash of pepper with it. Woodsy tasting tobacco with hints of coffee as the leather fades about half way through,but still provides a nice balance to the cigar.” –Ron (shuckins)

“The ash held strong up to this point and fell at the start of the second third. The sweetness was a bit more prominent at this point and tasted of toffee or caramel with hints of roasted almonds. The spice has mellowed out a bit but the strength has picked up. It was by no means overpowering and very enjoyable. The smoke has really begun to billow and was very rich leaving a nice sweet cream lingering on the palate.” –Milton (mjohnsoniii)

“The pepper is still persisting into this third but a little more mellow. The harshness has died down as well and no more tar issues. The nuts and spice are now prominent. More likable flavors in this third.” –Sandeep (Djangos)

“Not much change in this third. The woodiness continues without any real transitions. There is a bit of harshness that has crept in.” –Aaron (aaron72)

“Never a problem with the draw, although a little hot at times, it was easy with lot’s of smoke.” –Ron (shuckins)

“A wavy burn throughout but great smoke production. One relight required after the first ash drop took the fire with it.” –Gregg (McGreggor57)

“The first third showed some real potential that never fully materialized. While the second third was just so-so, the final third brought the flavors back around enough to warrant a second chance with this cigar.” –Gregg (McGreggor57)

“I wish more leather had come through to help balance the flavors, but it was still an enjoyable cigar that I would smoke again.” –Ron (shuckins)

“Definitely would try this again and I am hoping that I will not get the harshness and tar the next time.” –Sandeep (Djangos)

“The mysterious sweetness and spices tasted throughout have culminated into what has become a very enjoyable smoking experience. Other than having minor inconsistencies, I can see myself enjoying more of these and would possibly even have it as a daily smoke. If it had been of a shorter length, this would make an excellent lunchtime smoke. I’m excited to see what it is.” –Milton (mjohnsoniii)

“The first quarter inch really had my attention and I was hoping for that to continue which would have provided a very good experience. The flavors really mellowed out and became one dimensional. I could see the cigar pairing well with coffee as a first cigar of the day. Other than that, I wouldn’t see this as something I would regularly want to pick up.” –Aaron (aaron72)