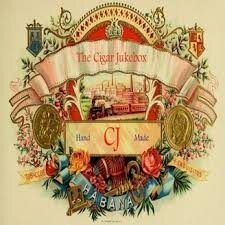 For new readers who are unfamiliar with our previous collaboration reviews, we have invited cigar reviewers from other cigar review sites, podcasts, blogs, etc. to join the Blind Man’s Puff staff in doing blind reviews using our format. This collaboration review is with a new participant, Dave from Cigar Jukebox. Dave, originally from the United States, currently resides in Australia. Cigar Jukebox is a podcast where Dave pairs cigars with music. Dave also has guest DJ’s on to get other peoples take on what music pairs with the cigar they are smoking which is a really cool concept. The website is not only a portal to the podcast, but also consists of cigar reviews. We highly recommend that you check out Dave’s site and podcast.

“Great looking cigar with a smooth, light brown wrapper and a quite smooth surface. The veins on the cigar are visible but not very prominent to feel. There are three well applied caps. The cigar is quite firm to the touch the entire length and no soft spots are discernible. Also, no discolorations are appreciable on the surface.” –Sandeep (Djangos)

“I get a different scent from each part of the wrapper. The body of the cigar had a strong aroma of hay with a raisin undertone. I got a barnyard and tobacco smell from the foot, and the pre-light draw was hay and pepper.” –Alan (Eulogy)

“The cigar has a nice cream and buttery taste to it with hints of cedar. This first third is very smooth, but lacks some complexity right off the bat. As this third progresses, the complexity increases with some buttery cream and hints of honey. These flavors work well with more traditional tobacco and cedar notes. The cigar starts to come into its own near the end of this third. The finish consists of tobacco, cedar, butter, cream and slight honey flavors. These flavors take on a nice rich character, but they are not too heavy.” –Dave (Cigar Jukebox)

“The first third is really enjoyable. Super smooth with a walnut and cedar flavor. I get some spice on the retrohale, but not much. The smoke is pretty mild in general. This is a cigar that could be very easily overpowered by the wrong pairing.” –Jack (Jack_H)

“Honey and caramel notes are coming more to the forefront. The finish is smooth, rich and creamy. Well balanced. Some nice tobacco and toasted notes with a nice hearty finish. The buttery cream characteristic prevalent throughout the first third is also a key component to this third. There is a nice toasted flavor with butter cream and cedar flavors. The flavors in the finish are quite subtle and not overpowering. After the ash, the cigar kicks up in cedar and oak flavors with a hint of caramel. Complexity increased in this third with tobacco, oak and cedar flavors balancing nicely against butter cream, honey and caramel notes.” –Dave (Cigar Jukebox)

“The second third is very similar to the first. I get a strong flavor of tobacco and hay with a little more pepper than the first third and there is a graham cracker flavor that peeks in occasionally. The biggest change of this half is that the retrohale has changed from a sweet cream to a very floral, almost rose like flavor. Thankfully, the floral taste is only on the retrohale as it would overpower everything else.” –Alan (Eulogy)

“In the final third now, and as I come to the end of the stogie, the only real change was that the heat on the lips and palate and burn through the nose really kicked up in strength. To me, this was the best third flavor wise because of that.” –Robert (NavyPiper)

“The final third brings a resurgence of the flavors so conspicuously absent from the middle third. The pepper is back with a blast and increases in intensity to the very end of the cigar. Also, there is more of a leather like component with a tobacco background. Overall, a much better third in terms of flavor profile and complexity as compared to the middle third. There are no issues once again with the burn or the draw to the very end.” –Sandeep (Djangos)

“The draw begins a bit loose, but levels out after the first 5 minutes. After that, it is dialed in well with just enough resistance. The draw itself remains consistent throughout the remainder of the smoke.” –Dave (Cigar Jukebox)

“The burn was as sharp as James Bond from start to finish.” –Jack (Jack_H)

“No problems with the construction were detected during the review.” –Robert (NavyPiper)

“This is a solid cigar that increases in complexity throughout the smoke. The cigar is well balanced and there is a great balance of flavor and strength. Construction is excellent and the cigar itself smokes really well and allows you to smoke at a slower pace to enjoy subtle flavor changes. The first third started off a bit one dimensional; however, the final two thirds had some wonderful flavors and textures. The cigar truly shined in the second and final thirds where honey and caramel notes balance well with tobacco, cedar and oak flavors. I would happily smoke this cigar again and I would love to have it in a corona.” –Dave (Cigar Jukebox)

“I really enjoyed this cigar. It’s not the most complex cigar I’ve had, but there were enough profile changes to keep me engaged and it preformed perfectly. I only wish it had a creamier smoke to provide a better mouth feel. This would be a cigar that I would keep a few on hand for when I wanted something mild but that still had flavor.” –Alan (Eulogy)

“Unfortunately, this stogie just really didn’t do much for me. Maybe it was that 1 in a million fluke, I don’t know, but it just wasn’t very enjoyable for me. The flavors weren’t really working for me, and with the continuous issues with the burn, it was rather frustrating at times. Would I try another to compare the 2? Sure, absolutely, but can’t say at this time that I’d go looking for some more.” –Robert (NavyPiper)

“Overall, this cigar was a pleasant experience. It would have scored higher had the complexity of the cigar been anything like the final third. The middle third was quite disappointing with almost complete muting of flavors and pepper. Overall, I would definitely try this again but will definitely let it rest for a while.” –Sandeep (Djangos)

“This cigar was pretty mild. It had its moments, but it was still hard to tack down any substantial flavor at times. I enjoy light cigars generally, but this one didn’t work for me.The construction was awesome but I couldn’t see myself smoking this with anything but tea. If you are newer to cigars or you don’t want to blow out your palate, this may be for you.” –Jack (Jack_H)
–