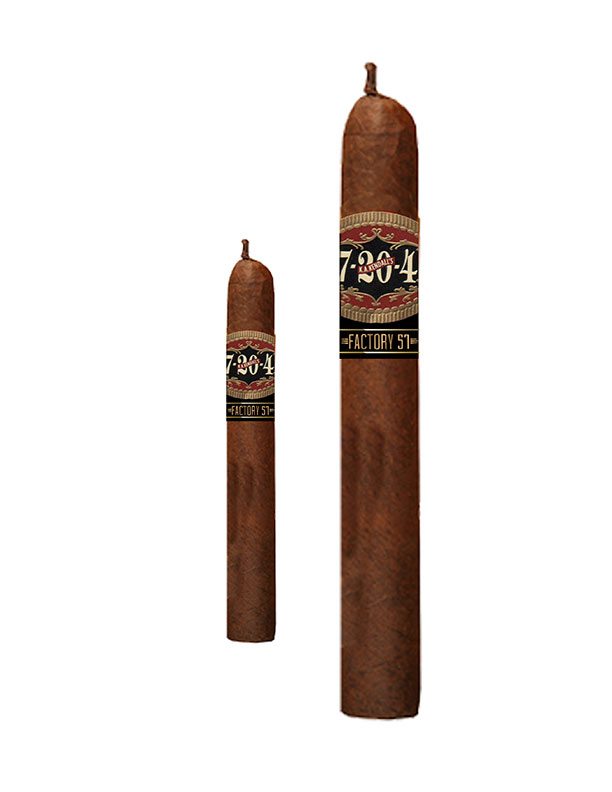 “Following its introduction at last July’s IPCPR trade show, we realized retailers’ orders had exceeded our initial production run,” states Kurt A. Kendall, 7-20-4 Cigars’ Founder and President. “Since we didn’t have enough extra-select, high-primed Jalapa (Nicaragua) wrapper leaf, we opted to fill as many pre-holiday orders by retailers as possible, and wait for the balance of this extraordinary leaf, before completing the shipments. The tobacco has now arrived, and we have shipped the balance of the Factory 57 cigars in all sizes … Corona, Robusto, Churchill and 6” x 60 Gordo.

Factory 57’s five-nation blend consists of the high-primed Nicaraguan wrapper, a Costa Rican binder, and a filler of Nicaraguan, Honduran, San Andreas (Mexican) and Colombian tobaccos. They are all aged a full three years. Kendall describes the cigar as “medium-to-full bodied, with a flavor profile that is bold but very smooth, with a distinct creaminess.”

Factory 57 is entubado bunched for a plug-free, even-burning cigar. The wrapper tobacco is triple-fermented, which prevents bitterness in the latter part of the smoke. About then, the smoker also notices the head remains firm, with no unraveling in his mouth, due to the double cap on the head. The cellophane-tubed cigars are presented in high-quality Spanish cedar boxes. Manufacturer’s suggested retail pricing runs from $7.75 to $9.50.

The “Factory 57” name was the US government’s 1874 designation of the original factory as a manufacturer of premium cigars, for purposes of federal taxation.

Following this licensing, the company went on to become the world’s largest manufacturer of premium cigars, continuing until the Cuban Embargo led to 7-20-4’s demise in 1964. The old factory still stands silently, only a few blocks from Kendall’s Manchester, New Hampshire location.