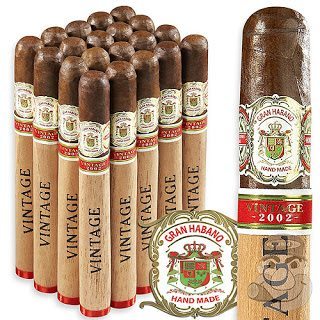 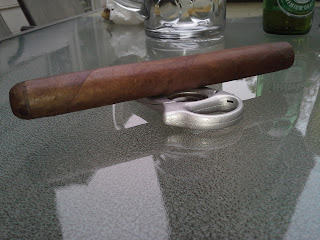 “This is a very good-looking cigar right off the bat. There’s an oily sheen to the wrapper with noticeable veins that were smooth to the touch.” –Milton (mjohnsoniii)
“Triple cap, dark toothy wrapper, medium vanes with tiny pinholes in the wrapper. Not the most inviting stick, but nothing note worthy on the negative side.” Jason (bigslowrock)

“A very mild, barnyard aroma…the foot has a bit of cocoa powder, but that’s about it. What I get is pleasant, but I don’t get a lot of it.” –Myles (MylesT)

“Firm at the head and foot with about an inch of soft construction right in the middle of the cigar.” –Aaron (aaron72) 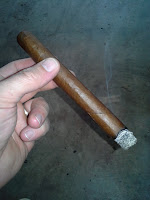 “Pre-light draw first brings the taste of sweet tobacco, but then I got a spicy sensation on my lips and tongue. Not getting a lot of smoke from my draws. First off got the flavor of dry toast. That flavor continued with slight hints of graham cracker. Ash held on in 1 inch chunks.” –Aaron (aaron72)
“Creamy smoke predominantly wood and herbal tea with a slight sweetness. A taste of some tanned hide in there as well. Ash retention great, letting go at the 2″ mark.” –Ian (Sp@rky426) 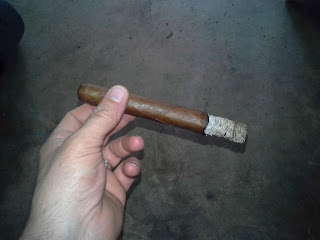 “The ash fell at the beginning of the second third with the smoke billowing and was very creamy. The uneven burn began to even itself out and a mixture of cloves, cayenne pepper and sweet vanilla beans coats the palate. The cigar has began to show definite signs of complexity which has become much more noticeable at this point. My favorite part thus far is the retro-hale in which all flavors compliment each other wonderfully.” –Milton (mjohnsoniii)
“This is starting to pick up in the second third. Some interesting flavors of raspberry and earth are coming forward, now, along with a touch of leather. I’m starting to get some bitterness, and find myself purging more often than I usually do to keep this stick smoking pleasantly.” –Myles (MylesT) 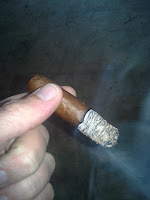 “Getting much more smoke on the draws now. Flavor is staying the same with a slight metallic flavor on the finish. It got very harsh right at the end.” –Aaron (aaron72)
“Picked up more cocoa with the wood and tea followed by a barnyard grassiness to finish it out.” –Ian (Sp@rky426) 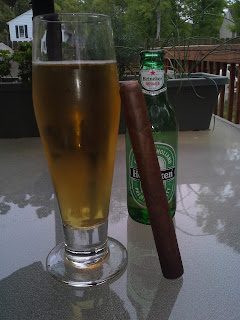 “Overall it was just ok. Flavors were nothing special and the fact that it was a Churchill just drug out the experience.” –Aaron (aaron72)
“Having the main flavor of herbal tea and wood I am not a big fan of this one, the sweetness was nice and set in more so in the final third but the dryness left on the palate was not pleasurable and overall took away from the cigar. While I wouldn’t give this Churchill another go, I would seek out a smaller vitola for another try. If you are a fan of mildly sweet tobacco focusing on wood, cedar, tea with absolutely no spice then this cigar could be a go to for many, sadly it was not my cup of tea.” –Ian (Sp@rky426)
“Hopefully, I got either the oddball sick or over-humidified cigar of the group.  To be honest, I would have never gone past the first 2″ of this stick without the review hanging in the balance.  I would have ditched it and grabbed something else.  It just was not good at all.” –Jason (bigslowrock)
“This cigar was pretty inconsistent during the first third and had me wondering if I’d really enjoy the rest but seemed to open up and produced many different flavors that complimented each other very nicely. The complexity kept me intrigued after the first third and continued that way until it was completely nubbed. I’d definitely get a few of these to keep in the humidor to be added to the rotation. It seemed like it’d be a great cigar with a bit more rest.” –Milton (mjohnsoniii)
“Lots of coffee and earth, but some issues with bitterness and burn. It was rich and heavy, but not really all that complex.” –Myles (MylesT)