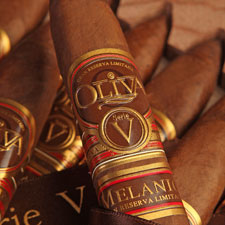 The Oliva Serie V Melanio Maduro is still on its way, but the debut of the limited-edition cigar has been pushed back more than a month. Oliva Cigar Co. originally wanted to have the new smoke on sale for Father’s Day in June, but the Miami Lakes, Florida company will now unveil the cigar in July at the International Premium Cigar & Pipe Retailers trade show.

“We will be releasing a limited supply of Serie V Melanio Maduro at the IPCPR this year,” explained Dave Wagner, director of operations for Oliva Cigar.

The smoke is a one-size release, a box-pressed torpedo measuring 6 1/2 inches long by 52 ring gauge. Made from a blend of Nicaraguan Habano grown in the Jalapa region of the country, wrapped in a Mexican maduro grown in the lush San Andrés Valley, the smoke will be packed in boxes of 10.

The suggested retail should be about $13. The cigars will have bands identical to those that adorn the original Serie V Melanio (see photo), with a secondary band that has yet to arrive in Oliva headquarters.

Wagner said the release would be confined to 10,000 boxes for a total run in 2013 of 100,000 cigars. The cigars will be on sale only at the show, said Wagner, and he expects Oliva to make it an annual release. Like all of Oliva Cigar Co.’s cigars, these are being rolled in Nicaragua.

Oliva Serie V Melanio debuted last year and is named in honor of Melanio Oliva, who grew tobacco in the 1800s on a small farm in San Juan y Martinez, Cuba. Melanio is believed to be the first member of the Oliva Cigar Co. family to grow cigar tobacco.

Cigar Insider conducted a vertical brand tasting of all five sizes of the original line in the November 13 issue, with an average score of 89.6 points. The top-scoring smoke of the group was the Figurado, which scored 92 points in our blind tasting.