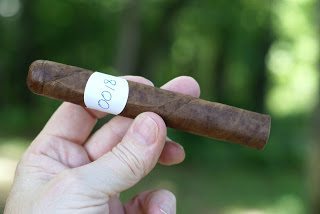 “The cigar has a nice triple cap and a very good looking, slightly toothy, dark Colorado wrapper. There are a couple veins but nothing worrisome.” –Emmett (rhetorik) 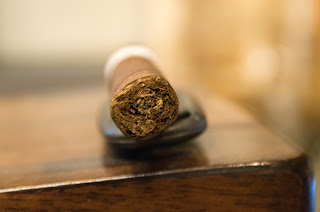 “Aroma smelled of fresh hay, and pre-light draw tasted of barnyard. I was intrigued and excited about smoking this little beauty!” –Robert (NavyPiper)

“Well constructed cigar; no visible seams, a very nice triple cap, and a perfectly round shape. Firm throughout, no soft spots or obvious issues.” –Derek (lilninjabuddy) 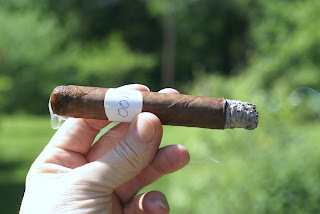 “Bittersweet chocolate with spicy nutmeg and dry cedar tobacco flavors to start. It is packing a bit of heat that burns when I retrohale.” –Ron (shuckins)
“A very “toasty” profile that consisted of wood, pepper and leather.  The retrohale was a medium strength pepper that complimented nicely.  At times there were flavors that were reminiscent of ammonia which could be due to age, quality of tobacco, fermentation… or any number of factors.” –Will (Dubv23) 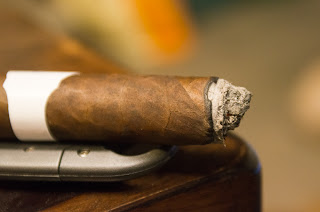 “The second third keeps getting better, I’m getting more of the great tobacco flavor with a lot of earth and tea mixed in there.” –Emmett (rhetorik)
“Still mostly Hickory smoke with mild pepper & spice, but then came on a sweet honey flavor that continued throughout this third, with the smokiness increasing in intensity which I enjoyed.” –Robert (NavyPiper) 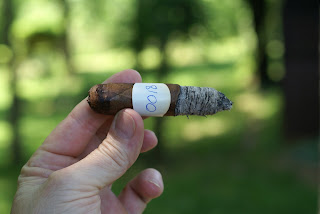 “Smooth, almost creamy at the end with cocoa, light leather and cedar, but a little pepper kicked in to put a stop to it, and give it a stronger finish” –Ron (shuckins)
“This third continues to impress with its mild strength and plethora of flavors. There is a little pepper creeping in but nothing strong, more like red pepper. There are a few baking spices in the background, and still the very earth undertone.” –Emmett (rhetorik) 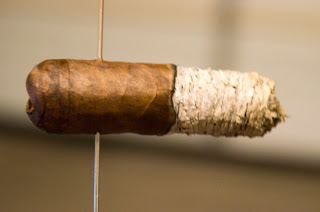 “The changes and dimensions in flavors made it an enjoyable cigar to smoke. I liked the way the nuances of chocolate went from bitter to cocoa, while the nutmeg turned to pepper, causing the leather to fight with hints of coffee in an attempt to turn the cigar creamy.  It did get hot a couple of times, or else I would have scored it higher” –Ron (shuckins)
“This stick was a stick to bring back pleasant memories of days gone by when I’d go camping with my parents & grandparents. It had terrific flavor, perfect draw and was a joy to smoke! I want more!” –Robert (NavyPiper)
“It’s hard to rate the overall experience, because there really wasn’t one. The cigar was extraordinarily one-dimensional without every being delicious or awful. In fact the most remarkable thing about it was that it was completely forgettable. I’d say if this was a bundle stick, it might make a great yard-gar if you’re a fan of the ligero-heavy flavor profile, just be warned this is a truly mild version.” –Derek (lilninjabuddy)
“This cigar was okay… The flavor was nice and could be enjoyed anytime of the day.  The cigar performed well and output a favorable amount of thick smoke which helped it a bit.  This one did suffer from a pretty one dimensional profile that only changed for the worse when the bitterness came forth and took away from enjoyment.  Is it worth a shot?  I would say yes but I would not set the bar high as it could let a few down.” –Will (Dubv23)
“This was a great overall experience, with great flavors and not a whole lot of strength. I would recommend this to anyone beginner or expert.” –Emmett (rhetorik)