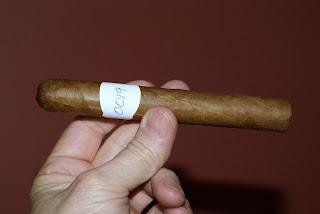 “The aroma is very light with not many notes to mention. Perhaps a bit of leather.” –Emmett (rhetorik) 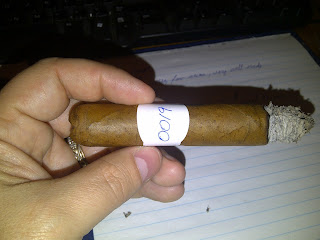 “The initial few puffs are lovely and earthy. I’m finding it pleasingly mild-medium, with touches of almond and clove, along with damp hay. Further in, I’m really picking up the clove character a lot, as well as other baking spices, like cinnamon and allspice, as well as a slight pepper edge. Overall though, this is still just pushing into medium, for me. About halfway through this section, I’m noticing some harshness. I find myself purging a lot despite not rushing in the slightest. Once the bitterness passes, I’m finding some interesting sea air flavors…that taste you notice right when you get to the beach…a mixture of salt, brine, and clean air. It’s unusual, but not unwelcome! Finishing up this third, I’m finding an odd sort of artificial licorice flavor coming and going, as well as an almost confectionery quality.” –Myles (MylesT) 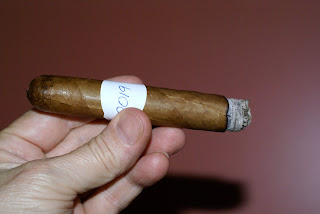 “The second third begins to add a woody component to the cream and fruit flavors.  As the third progress, the creaminess seems to taper away.” –Jason (bigslowrock)
“Getting a little spicier tobacco flavor with less anise, but the same creamy cedar taste has been joined by a splash of coffee. It doesn’t cling to the palate like before, as the coffee has a bit of bite to it.” –Ron (shuckins) 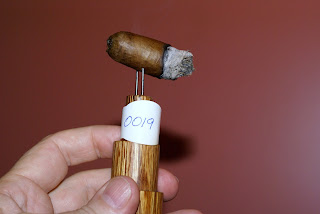 “During the last third, the pepper picked up a bit with some nutty flavors mixed in. There was a slight harshness to the flavor, but not too bad. The creamy smooth smoke was consistent from start to finish.” –Craig (WyldKnyght)
“Unfortunately, the trend toward harsh artificial flavors seems to be continuing. Its a shame, because, I can definitely taste nice flavors in the background, but they’re all muddled by the kind of plasticy taste I’m getting now.” –Myles (MylesT)

“The draw was quite good on this cigar. Structurally this cigar performed very well.” –Emmett (rhetorik)

The burn was the kind you tell your friends about, and that’s why I’m telling you. If it was any better, it would have distracted from the cigar, because I would have been watching it burn instead of paying attention to what I was smoking” –Ron (shuckins) 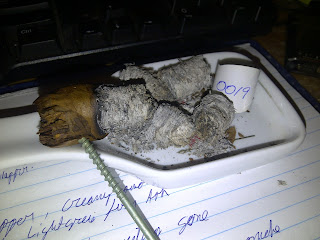 “I really liked the way this cigar started, and had high hopes for it halfway in, but it changed direction in the final third and took me somewhere I wasn’t prepared to go. I do look forward to smoking another one and will as soon as I know what it was” —Ron (shuckins)
“This was a great cigar, very enjoyable. I will definitely be buying more of these.” –Craig (WyldKnyght)
“It would be a good stick for a beginner or someone that prefers mild and simple cigars, perhaps at breakfast. Overall, I was underwhelmed with the overall complexity and flavor.” –Emmett (rhetorik)