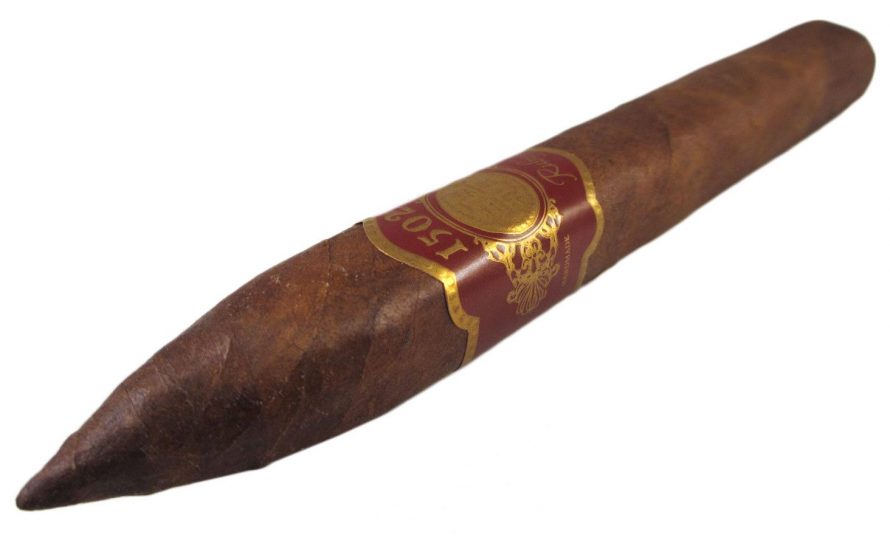 “A dark chocolate colored torpedo that is slightly box pressed with a very smooth surface. Veins are visible but not prominent. The foot is slightly covered just over the edge. Very good looking cigar!” –Sandeep (Djangos)

“I’m getting just a bit of spice from the wrapper and foot and just a hint of earth. The pre-light draw is very creamy.” –Emmett (rhetorik)

“The cold draw produces mostly dry grass and tobacco flavors. Once lit and allowed to cool I am surprised at the profile. The earth and spice notes provides in the aroma aren’t present at all in the flavor. Instead, I get very light notes of grass, pepper and tobacco. Not really a flavor bomb, but the flavors there are both delicate and complex. The stick is off to a nice start.” –Dave (mdwest)

“Begins with a blast of chocolate and cedar sweetness, with a surprising lack of pepper. It’s very smooth. A few puffs in, and it grows a bit bolder. Flavors are cedar, nutmeg and cocoa at the front. There’s dry wood and a nit of nuttiness behind. At the one inch mark, a touch of black pepper appears, giving a bit of additional complexity, and rounding the profile out nicely.” –Derek (StogieNinja)

“I’m into the second third, and this stogie is still a charm. A wonderful blend of smoky tobacco, pepper and the hint of spice earlier has increased quite a bit. The coffee has faded out to be replaced with a nice woodiness. Smoke volume is immense. The ash lasted right about 2″ before it dropped off.” –Robert (NavyPiper)

“Into the second third, “sweetness” is the primary adjective. A simply syrup sweetness, with a touch of black pepper, bittersweet chocolate, espresso and dry wood create a well-rounded flavor profile that I’m enjoying a lot. As I approach the midpoint, there’s a slight edge to the smoke, almost a harshness, but not quite. It’s certainly not enough to take away the pleasure of the smoke by any means.” –Derek (StogieNinja)

“In the final third, and I’m still thoroughly enjoying this stogie. The blend of smoky tobacco, pepper, spice and the woodiness is still awesome. Smoke volume is still huge. The only real change between the second and final third is that the flavors have increased in their intensity some. Wow, what a stogie!” –Robert (NavyPiper)

“Not much change from the previous thirds, but the flavors are still very good. The final third is a little creamier than the previous. The wood is still the dominant flavor, but there is a note of leather now that is a good way to finish this great stick. I nubbed this one, and it never got hot, really enjoyed it.” –Emmett (rhetorik)

“Slightly loose, and a bit airy. The combustion for the first half of the smoke was perfect, allowing for full puffs of thick smoke, even with the loose draw. However, it remained loose throughout, which may have contributed to the flatness of the last part of the cigar.” –Derek (StogieNinja)

“This stick burned extremely well. The burn line remained straight from beginning to end, and no touch ups were ever required, despite smoking outdoors with a good breeze blowing and inconsistent periods of time between puffs.” –Dave (mdwest)

“The construction was very good overall, other than the fact that it was packed really light.” –Emmett (rhetorik)

“I don’t know if I would want to do a box purchase here, but I would certainly consider buying a few of these to keep on hand to go with coffee in the mornings if the price were right. I enjoyed the flavors, and the mild strength would make it a good choice for starting out the day.” –Dave (mdwest)

“Overall, this was not a very pleasant experience for such a great looking cigar. Harshness and bitterness ruined the last part and the pepper drowned out most of the flavors in the initial third. Not something that I would probably want to try again.” –Sandeep (Djangos)

“Ok, I’ll say it straight up, I loved this cigar! From its appearance, construction and through the smoke, this stogie was a joy. I can’t wait to hear what it is so I can go score some!” –Robert (NavyPiper)

“A very decent, if frustrating smoke. The slight harshness detracted from the overall experience, and I wonder how it would perform if it had a slightly tighter pack, allowing for a less airy burn and slightly less frequent draws. The first third was fantastic, which made the downturn in the last half both perplexing and all the more disappointing. I’d like to give it a higher overall rating, but this experience left me with a somewhat conflicted opinion. I’m rating it “good” because I only have the one stick to go on. If I had a repeat of the same experience, I’d drop it to “fair.” If the second lacked the loose draw and the downturn in the latter part of the cigar, I’d gladly raise my opinion to “excellent.” –Derek (StogieNinja)

“This was a really good smoke, especially in the flavor department. The draw and light-pack would leave a little to be desired. This really reminded me of a Cuban cigar in the profile. I would definitely smoke this again, and hopefully would not have the construction issues. I will definitely be looking to pick up some of these.” –Emmett (rhetorik)