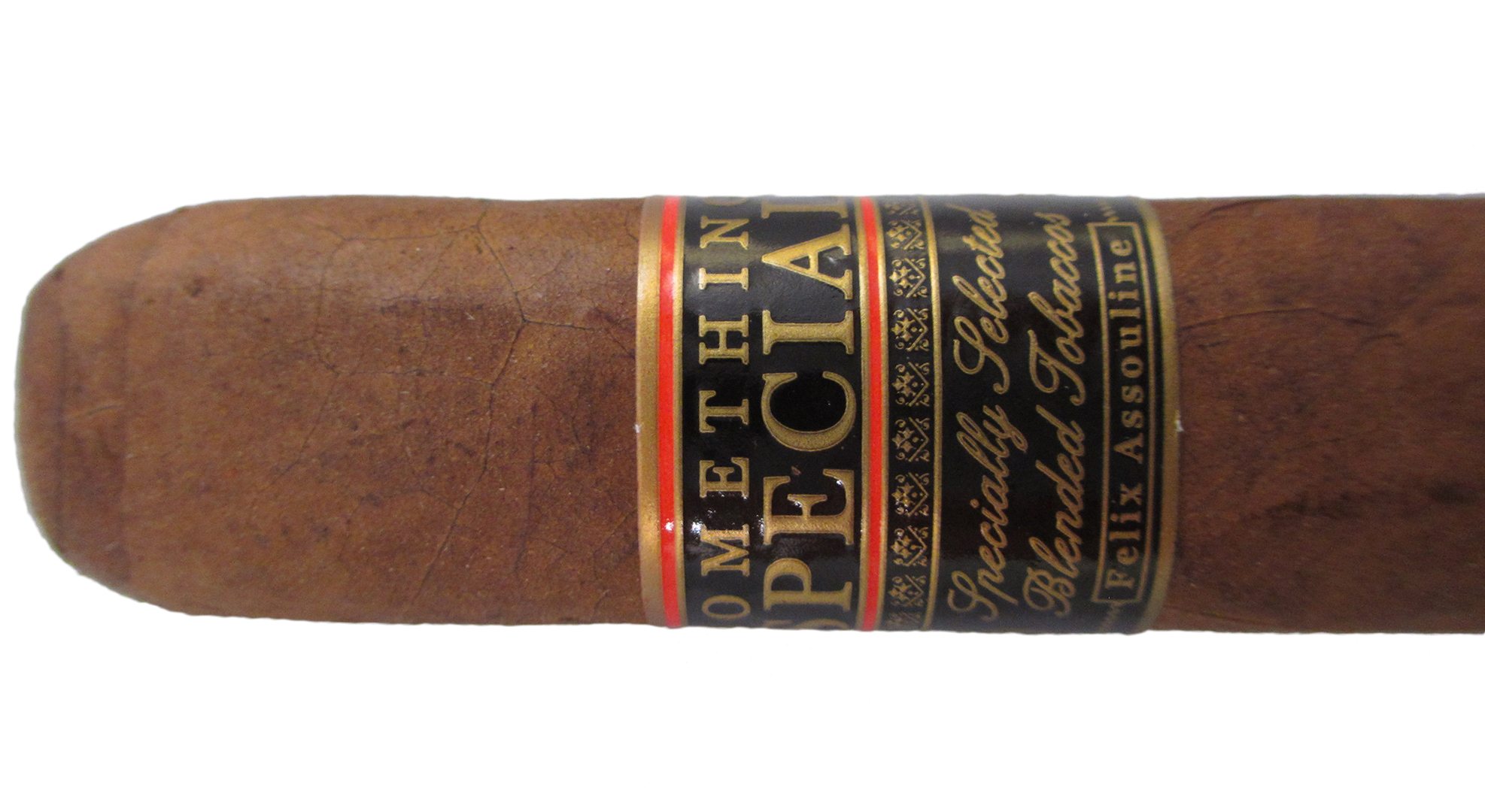 “This is a beautiful cigar. Everything I like to see in a smaller cigar but more of it. Deep reddish brown wrapper, even colors without blemishes. Neat roll, nice box press, tight seams, no veins. It’s big but very nice. …and big cigars need love too.” –Brian (B-daddy)

“I’m getting a strong hay and chocolate prelight aroma and draw. The chocolate almost reminds me of a cheap hot chocolate mix like Swiss Miss, but in a good way in being reminiscent of childhood memories.” –Jason (bigslowrock)

“Looks well made. No obvious defects or blemishes. A few veins on the wrapper, and has a nice give when pressed.” –Robert (NavyPiper)

“The cigar opens with very little pepper while most of the other flavors are mostly woodsy in character, mainly oak and cedar. There is some leather. It took a couple of lights to get the burn right all around, most likely because of the RG. The draw is a little tight and the smoke is not as much as I would like. There is definitely a creamy character to the smoke but very wispy. As the third progressed there are nuances of nuts that are coming in and out. The ash is holding firm and is a variegated grey black in character. The ash is still holding as I go into the next third. The flavors are slightly bolder at this time with more pepper and leather.” –Sandeep (Djangos)

“I’m getting a lot of cedar in this third. I’m also getting notes of coffee and just the touch of baking spice.” –Jason (bigslowrock)

“Second third is a continuation of the mellow tobacco and leather flavors of the first third. About halfway through this third, I start to get hints of cinnamon on the draw and in the retrohale. It stands out pretty distinctly against the background of this pretty muted flavor profile. Been fighting with the draw and burn on this stick. A lot of work for a little flavor.” –Brian (B-daddy)

“The earthy/ hay like flavors continued on into the second third. The experience was filled with a smokey flavor and smoke in the air. There was slight cinnamon and honey sweetness in the aftertaste. Cedar flavors appeared a little past the halfway point.” –Cindy (Ms_CindyLynn)

“I absolutely loved the last third of the cigar. Cedar arrived on each puff and there was a transition into an oaky aftertaste. Throughout the last third, each puff had a smooth and creamy finish.. making me want to finish it ’til the very end.” –Cindy (Ms_CindyLynn)

“This is probably my favorite third of the cigar as it seems to be delivering a bit more flavor than the first half. A nice mixture of coffee, cedar, sweet and cream with also some light balanced notes of pepper.” –Jason (bigslowrock)

“Considering the size of this monster. I was impressed with the draw. Just a bit on the tight side as is my preference.” –Jason (bigslowrock)

“Good burn with some minor skewing now and then that corrected itself most of the time.” –Sandeep (Djangos)

“This was a very enjoyable smoke. I would enjoy this with a cup of coffee in the morning. It was mild and mellow with delightful flavors.” –Cindy (Ms_CindyLynn)

“I’ll call it “fair” only because the last inch or so of the cigar showed some promise for what this stick may have to offer if it didn’t suffer from burn and draw problems. I’d feel obliged to smoke another one of these just to see if the construction problems in this one were a fluke. Flavors were pretty innocuous and nondescript until the last inch. Then, they were pretty good.” –Brian (B-daddy)

“I’m not a fan of the large cigars, but I’ll have to say that the box press seemed to help with some of those issues. I think it had a decent flavor profile. It could use a bit more complexity from start to finish with the size. If you are a big cigar size smoker, I would give this one a try.” –Jason (bigslowrock)