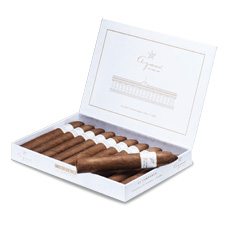 While many of the storied Cuban brands are still in production, few will remember Azan, an old, privately owned Cuban brand started by a Chinese immigrant before Fidel Castro nationalized the industry. It disappeared after the Revolution, but is now back as a Nicaraguan brand, restarted this year by Roberto Pelayo Duran. Azan officially debuted at this week’s IPCPR trade show.

“This must have been the only Cuban cigar brand started by a Chinese immigrant,” said Pelayo Duran, whose wife is a descendant of Azan’s original founder. The new Azan line was first launched in Hong Kong last April but now has distribution in the United States. Pelayo Duran was formerly employed by Pacific Cigar Ltd. and Havana House, both of which are major Habanos S.A. distribution hubs, bringing Cuban cigars to the Asia Pacific and Canadian regions.

Azan comes in three varieties: White Premium, Burgundy and Maduro Natural. The White line consists of an Ecuadoran Corojo wrapper, Nicaraguan binder and filler that includes tobacco from Nicaragua and Brazil. It comes in three sizes—Robusto, Robusto Extra and Campana—and will retail from $6 to $8.

The Burgundy line blends an Ecuadoran wrapper around Nicaraguan binder and filler and is offered in four sizes—Petit Corona, Robusto, Short Robusto and Short Campana. These sizes range in retail price from $3.50 to $4. Maduro Natural, with its dark, Ecuadoran wrapper and Nicaraguan blend comes in only two formats: Campana and Robusto Extra, both priced in the $10.00 range.

All three varieties are made in Estelí, Nicaragua, at a factory called D’Hatuey Tabacos S.A. and are distributed under Roberto Duran, LLC.