The Alec Bradley Occidental Reserve was the first premium offering from the newly formed Alec Bradley cigars back in the year 2000 and paved the way for this boutique brand’s enduring success.

“A beautiful, silky Claro wrapper with two (almost tangential) barely noticeable veins, and with smooth seams almost perfectly in parallel to each other.” -Stefan (Stefan)

“There was a soft floral note coming off the foot. The wrapper had a slight must, but was not off-putting. The cool draw was very soft and pleasant. This cigar has great potential.” -Steve (ThaGreatWazoo) 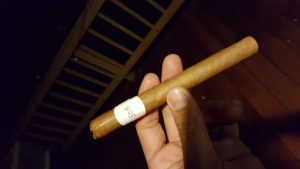 “The dry puff yielded a flavor of dried apples which was very peculiar, but intriguing. The initial flavors upon lighting were also entertaining. The flavors were on the sweet side but then intermittent spikes of harshness were scattered about which was a bit displeasing. Otherwise, the normal flavors were those of leather and a touch of dark roast coffee.” -Kent (Throck)

“Wonderfully creamy right off the bat; it soon dials down the cream while introducing notes of mushrooms and damp wood, and then cardamom. Around this third’s midpoint, about 20 minutes in, there is a new set of subtle flavors spanning the sour-bitter-creamy-savory spectrum, soon to be replaced by white pepper and dry wood, and finally by notes of cocoa beans as the burnline approaches the second third.” -Stefan (Stefan) 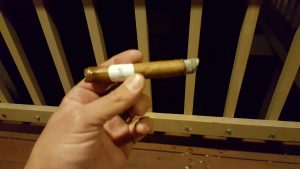 “The bits of harshness dropped off which was much appreciated. The overwhelming flavor was that of something sweeter; I would say dried fruit. This was a definite improvement over the first third.” -Kent (Throck)

“The second third continued with a floral tone, but started to develop a nice grass feel with a slight barnyard aroma. Just a very pleasant mix. Towards the end of the second, I picked up hints of nuts coupled with a slight uptick in strength.” -Steve (ThaGreatWazoo) 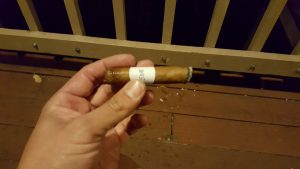 “The last 3rd was much the same was the 1st two. Still nice and smooth with some spice. Burned great all the way to the end.” -Wes (SosaCub4Life)

“The final third burned a little hot, but the smoke and flavor profile was still terrific. The floral notes subsided and more nut and grass flavors took over. The end was still pleasant, with no real bitterness or overheat. All around pleasant smoke.” -Steve (ThaGreatWazoo)

“The draw was really nice. It was close to perfect until reaching the end where it opened wide up and caused the cap end to become extremely hot.” -Kent (Throck)

“The burn was nice minus the loose ash. There were clean burn lines and rarely any touching up needed as the cigar progressed.” -Steve (ThaGreatWazoo)

“Very good construction to this cigar. The manufacturer definitely put in the time to develop this cigar as needed. Well done.” -Steve (ThaGreatWazoo)

“Overall this was a good mild smoke. While it’s not something I could choose to smoke often it would be a good morning smoke with some coffee. It would also be a very good cigar for someone new to cigars or a person who prefers a mild cigar.” -Wes (SosaCub4Life)

“Nothing shined for this cigar and ultimately ended in disaster in the final third with a lot of tar destroying any taste that I had left. I found this stick to be inconsistent and not very pleasing from the initial appearance to the end of its life.” -Kent (Throck)

“A textbook case of complexity and transitions, starting mild-to-medium and finishing medium-strong while hitting most of the flavors one would expect on the way. Hands down the best BMP smoke I’ve experienced to date.” -Stefan (Stefan)

“Overall, this cigar was very pleasant and made for a nice evening smoke. Grab your favorite libation and enjoy this one. Smooth profile coupled with a nice ease of smoking. Job well done.” -Steve (ThaGreatWazoo)