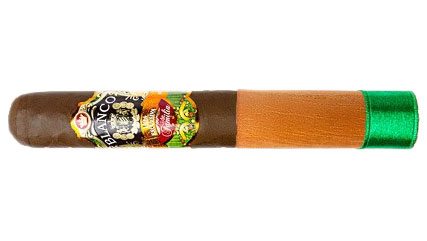 “Very dark almost to the point of being a black wrapper. The wrapper is also very oily.” –Jason (bigslowrock)

“The cigar doesn’t feel evenly filled. I’m also having color come off on my fingers as I smoke it.” –Jason (bigslowrock)

“Pepper with a strong woodsy tobacco flavor on light up. Coffee on the light side, along with a nice anise flavor joined in soon after.” –Ron (shuckins)

“The cigar started off with a very oily texture that coated the palate and left a light creamy leather but a nice noticeable molasses sweetness. The smoke output was decent but had a blue tint to it. The wrapper dyed my fingers dark brown immediately which was less than appealing to me.” –Will (Dubv23)

“Still peppery with a little less woody flavor. Coffee has a dark roast taste and the anise has a bit of a bite to it that gives everything a nice kick.” –Ron (shuckins)

“This cigar went from decent to sub par. Harshness dominates the flavor profile. There are some other nicer flavors, but it’s really hard to get over the harshness.” –Jason (bigslowrock)

“No real change in flavors, although the pepper faded enough to allow the anise to turn to leather, and picked up a nice creaminess as it neared the nub, providing a nice finish to the cigar.” –Ron (shuckins)

“Final third continued to be mellow, almost bland. Burn was still an issue as it continued to tunnel. Near the end I started to get leather again and some ash flavor.” –Craig (WyldKnyght)

“Nice balance of openness and resistance that required a primer puff but once it was going produced decent smoke.” –Will (Dubv23)

“Only thing this cigar did right was not go out. The burn line was all jacked requiring four or five touch-ups. Smoke production was not very good either.” –Jason (bigslowrock)

“A decent cigar that I would smoke again, I only wish it had a couple more dimensions to it.” –Ron (shuckins)

“This cigar started out good with lots of promise, but died out pretty quick. Not something I would smoke again.” –Craig (WyldKnyght)

“Just not a very good cigar. I would not revisit it.” –Jason (bigslowrock)

“The flavors were okay but nothing special. The flavors were not nearly as strong as the cigar would lead one to believe based off looks alone. It did deliver a solid sweetness and added depth that would allow it to be enjoyed by anyone. Unfortunately though, a novice smoker may be intimidated by such a dark wrapper. I was turned off when I noticed that the wrapper left a heavy brown tint to my fingers, lips and even the back of the band. It was a struggle to keep myself clean which would bother me if I was smoking at a shop or with friends.” –Will (Dubv23)