E.P. Carrillo debuted the La Historia line at the 2014 IPCPR trade show. The La Historia is a tribute to Ernesto’s mother, and his entire family. Each vitola is named after a different family member. La Historia falls at the top of their portfolios pyramid along with the Encore as the company’s more premiere lines. 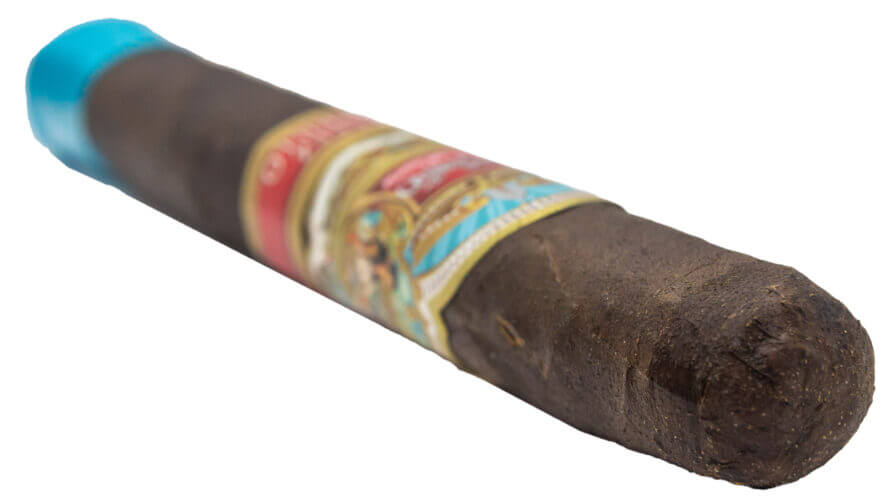 “There was a slightly oiled surface to the dark wrapper, a lot of small veins, and a seamless appearance.” –Isaac M. (The Nothing)

“This cigar tastes good, and rather complex from the first light. Earth, hay, leather, dark semi-sweet chocolate, and baking spice creaminess seem to be battling one another, but it works.” –Randy B. (randobush)

“White pepper came into play in the second third. It hung in the lips and tongue. I could feel the draw tightening and a bitterness forming at the head, requiring a second cut to the cigar. White pepper continued as the primary flavor with dark tobacco bringing a rich vegetal flavor.” –Isaac M. (The Nothing)

“Running on the backbone of the saltiness you got a blast of pretzels. Nut flavors rounded out the second third with mostly

“In the final third this cigar for me transitioned into a butterscotchy citrus flavor. The finish on the palate between puffs went from long (1st third) to medium (2nd third) to a light white pepper citrus medium finish in the final third” –Randy B. (randobush)

“The cigar is finishing with the same strong earthy flavors that have existed throughout. Strong hickory smoke with hints of mineral notes like lead. Occasionally a nice chili spice sneaks into the retrohale.” –Lauren S. (Lauren S.)

“Burn was solid but not razor sharp. No touch-ups or relights were required.” –Randy B. (randobush)

“The cigar’s initial appearance had me concerned. It lacked finess, however the construction was otherwise solid, and the first ash fell at 3” in.” –Randy B. (randobush)

“This cigar really surprised me in a good way. The appearance and feel were rustic and unrefined, almost like the roller lacked experience, or the QC person let this one slip by at the factory.  However, flavors, burn, draw, finish, and retrohale were very nice and made for a great smoke. The cigar burned cool down to the nub and never got bitter. ” –Randy B. (randobush)

“Wasn’t too bad of a smoke, flavors were good up to the last third where it got bitter. Purged it a few times but it tunneled and burned too hot. Nubbed it with a knife which helped cool it down a bit which helped the bitterness ease up. Not bad, but not something I’d go out of my way for.” –Joseph S. (Bearded Bastard)

“An extremely earthy and smoky cigar. If you are a fan of sticks with strong mineral and hickory style flavors this should be added to your list to try. While it’s not exactly my preferred profile I definitely appreciated the layers of mineral, smoke, and hints of spice.” –Lauren S. (Lauren S.)

“I’m eager to give the cigar another try, hopefully, the next one won’t have the draw issues that this one had. If I can find one that’s going to smoke without a fight I think this would be a great cigar. But this cigar, with the difficulties that I had, makes it not so great. It needed too much attention to keep the bitterness from building up and the draw where you want it to be. The first third though was certainly delicious and I could use some more of that.” –Isaac M. (The Nothing)

Blind Cigar Review: E.P. Carrillo | La Historia Dona Elena
Summary
"An extremely earthy and smoky cigar. If you are a fan a sticks with strong mineral and hickory style flavors this should be added to your list to try. While it's not exactly my preferred profile I definitely appreciated the layers of mineral, smoke, and hints of spice." -Lauren S. (Lauren S.)
Appearance
94
Aroma
92
First Third
93
Second Third
93
Final Third
93
Draw
95
Burn
95
Construction
94
Overall Experience
94
90
Very Good