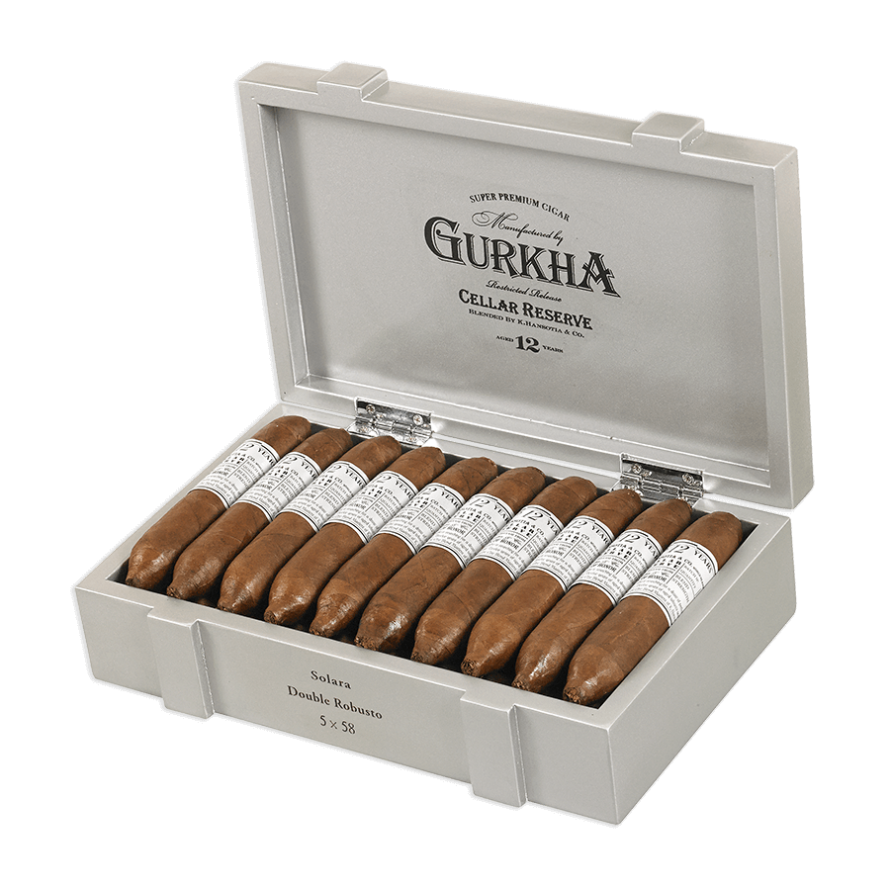 “Looks like a perfecto with bi tapered ends. The head has a coiled pig tail like end. No clear cap is visible. The foot is tapered with a small cut end. The surface is mostly smooth with some prominent veins visible not to feel.” –Sandeep (Djangos)

“The aroma is one of light leather and some hay. The dry draw is slightly sweet with nutmeg and some white pepper to the tongue.” –Sandeep (Djangos)

“The beginning of this cigar was dynamic. The flavors on the mouth were full and rich. The smoke coated the entire mouth and was just dynamite. ” –Steve (ThaGreatWazoo)

“The first inch has a brown sugar sweetness and a fleeting fresh bread note — one of my favorite components to a blend. There is a bit of spice that reminds me of ginger snaps, but nothing overwhelming. The retrohale has a long, smooth finish that compliments the blend very well. This, as opposed to bringing out other subtle flavors makes for a very smooth retrohale. I am really enjoying this so far.” –Ryan (Youngryan216)

“The second third continued with a really good smoke and profile. The main flavors consisted of sourdough bread, smooth pepper, and cedar. The retrohale was calm and offered a nice finish to the draw. ” –Steve (ThaGreatWazoo)

“The second third has lost most of the bread note, and it is replaced with a soft leather note and increased spice.
The blend is balanced and never overpowering. The only thing this portion of the cigar is lacking is a bit more character. These are pretty traditional cigar flavors, but done in a very balanced and palatable way.” –Ryan (Youngryan216)

“The cigar has done a complete 180*. It really hits it’s stride in the final third. Baking spices, espresso notes, cedar, bits of vanilla, and–bear with me–Oreo cookie. Black pepper on the tongue, nuts and wisps of vanilla on the retrohale. THere’s still a bit of oaky bitterness, but it’s a minor detraction at this point. ” –Derek (StogieNinja)

“The final third has a distinct sweet, perfume on the retrohale when given a chance to really cool off between puffs. The blend reaches a crescendo here and is tasty until the nub.” –Ryan (Youngryan216)

“Figurados are tough. This one starts off right, gets way too open, then tightens up. Overall, decent.” –Derek (StogieNinja)

“No issues with the burn the entire length.” –Sandeep (Djangos)

“Well constructed cigar with a double perfecto like shape. the head had a pig tail like construction and the foot was tapered and cut. Firm to the touch the entire length of the cigar.” –Sandeep (Djangos)

“Overall the cigar was on dimensional with leather and hay with some earthy flavors. However there was harshness in the middle and final thirds that took away from the enjoyment. Not my kind of cigar.” –Sandeep (Djangos)

“The first third was very disappointing; flavors were watered down, and the whole experience was too airy to start. By the second third, it improved drastically, and was very good in the final third. I do wonder if the experience was common, and will be looking forward to the reveal. Not one I could recommend after my experience, but perhaps worth a second look if others’ experiences were more consistent.” –Derek (StogieNinja)

“This cigar was an absolute dynamite smoking experience. From the look and feel in the hand to the smooth flavor transitions, this cigar will please the entire range of smokers. Grab some of these and truly enjoy. Great cigar. ” –Steve (ThaGreatWazoo)

“There is a refinement to this cigar that is instantly recognizable upon light up. It’s clear that time was taken to perfect the idea of this blend. While I am not a fan of the size, the perfecto shape being tapered at the top made it more comfortable to smoke. It was a nice blend, but I’ll bet it’s better suited for smaller vitolas. My logic here is that less filler would equal a bit more character from the wrapper and binder — Which is my only real complaint with this stick. I’d smoke another no questions asked.” –Ryan (Youngryan216)