“Small rustic looking cigar with both ends open. It looks like a quick hand rolled cigar that is ready to smoke right off the bat.” –Wes (SosaCub4Life)

“The wrapper had a mild sweetness, the foot smelled like mild tobacco and wood. and the dry puff tasted like wood and cardboard.” –Craig (WyldKnyght)

“The first couple draws on this cigar had me worried. They were very light and lacking any forward flavors. Then, the cigar opened up and became delightful. There was a nice amount of strength that formed. The profile was nutty, with a hint of cedar wood, and a nice white pepper finish.” –Steve (ThaGreatWazoo)

“So far this cigar is not bad. I was not expecting much from the looks of it. It has a nice sweetness to it and just a hint of spice. The burn had gotten way off towards the end of this 3rd.” –Wes (SosaCub4Life) 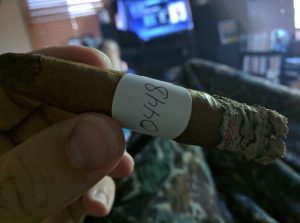 “After a rough first third this cigars settles down a little. A mix of leather and cedar combine with background flavors of allspice and cocoa. While encouraging, the flavors never really achieve any balance.” –Gregg (McGreggor57)

“The burn was still uneven, but not bad. The nutty flavor mellowed and the smoke was fluffy.” –Craig (WyldKnyght)

“The final third was just as clean and smooth as the beginning. No real changes in the complexity, but the cigar profile was very nice. A slight char built up towards the end and a little high heat came through. Not a bad finish though.” –Steve (ThaGreatWazoo)

“The last third was much the same as the 2nd. Overall mix of spice and sweet. Some nice spice on the retrohale.” –Wes (SosaCub4Life)

“The draw was very clean and allowed a real nice amount of flavor and smoke to come through.” –Steve (ThaGreatWazoo)

“The burn was nice, as well. Very clean lines. There were no real touchups or relights needed. Just torch and go.” –Steve (ThaGreatWazoo)

“Construction was pretty good. Burn was Ok, draw was good and the cigar held a very nice ash.” –Wes (SosaCub4Life)

“It’s not that this cigar lacked flavor, there just wasn’t any balance to those present.The overwhelming pepper and char, combined with a metallic taste of the first third pretty much shot my palate. The middle third was OK before succumbing to a harshness at the end. I’m anxious to read the other reviews on the chance I got a bad sample.” –Gregg (McGreggor57)

“This was a really nice cigar. After the first few draws, the cigar really picked up and the flavors came through. They were rich and full flavors that had a medium body and complexity. The cigar smoked well and was very easy by just lighting and going. I was initially worried about the look of this cigar, but it smoked quite well.” –Steve (ThaGreatWazoo)

“This cigar was the tale of two cigars, it started out really good, but had an awful finish. I would have to try it again to see if I get the same results before recommending it.” –Craig (WyldKnyght)

“Overall this was a pretty decent cigar. I’m 99% sure it’s a J Fuego America that you can buy in a 5 pack. It’s pretty nice for a quick smoke and you don’t need a cutter or fancy lighter. It had a nice mix of sweetness and spice. If you are looking for a nice easy quick smoke… This wouldn’t be bad.” –Wes (SosaCub4Life)