Perdomo Cigars revamped the Perdomo Estate Selección Vintage (ESV) line in 2019 with a new blend and secondary band. Not many new cigars come out of Perdomo cigars even though they are one of the top sellers in the country. The line was born in 2005 with a previous revamp in 2016. Those were regular production cigars and this newest is a limited production. Estate Selección Vintage (ESV) was originally made as an homage to the late Nick Perdomo Sr., who passed away the year prior. For the first time,this ESV is box-pressed. As with many Perdomo blends, it comes in three wrapper selections: Ecuadorian Connecticut, Sun-Grown, and Maduro. 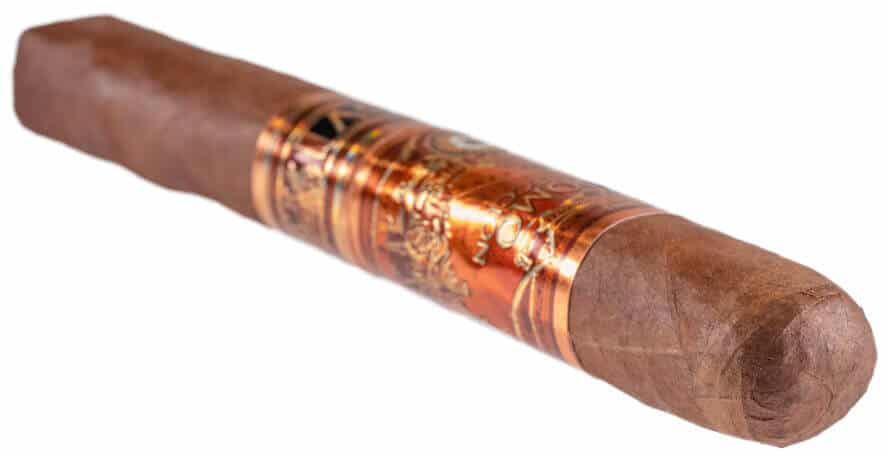 “The cigar had a seamless appearance, with slight veins and barely noticeable box press.” –Isaac M. (The Nothing)

“Salted, sweet cedar with a hint of cayenne start the show on the light up.  Finish is long with sweet cayenne lingering on the tongue until the next puff.  1/2” in some baking spices come in with a hint of fruitiness, citrus almost, but not quite. I’m going with plum vs citrus.  Retrohale is semi pleasing, fairly smooth with the baking spices, but also with a little pepper zing.  1” in and this is the squishiest, softest cigar, ever, but so far…not effecting performance.” –Randy B. (randobush)

“Started off with a nice blast of floral and a slight pepper. Pepper picked up after a few puffs but nothing crazy.” –Jake P. (Jake P.)

“In contrast to the beginning, the cigar moved to a cardamom bread flavor in the second third. As it moved along other kitchen spices almost joined in, making each puff nearly a different taste.” –Isaac M. (The Nothing)

“Going into the 2nd third, there is no lack of flavors here. Baking spices, cinnamon candy, salt, sweet Hungarian paprika, light cocoa powder, cayenne.  I’m still flipping out on how soft and squishy she is.
Ash is hanging on still in the 2nd third, but tapped dat ash at 2.5”.
Burn is cool, not hot, and while not entirely razor sharp, the burn is not wonky, and requires no maintenance.  Flavors are all over the place, but come together for a pleasing finish.” –Randy B. (randobush)

“Wrapping up the end of the cigar was a variety of kitchen spices and wood notes. Cumin and cedar, allspice and mesquite. There was a fair difference from puff to puff. ” –Isaac M. (The Nothing)

“Going into the final third, a lot has changed. Baking spices, salt, remain with a bit of a citrus zest, roasted pistachio, cedar, and a slight metallic zing. Cinnamon, gone. Paprika, gone. Not off putting, but a young tobacco taste, and a plethora of smoke output on the draw.” –Randy B. (randobush)

“The burn was solid from start to finish, but ash seemed to fall regularly before even reaching the half-inch mark. ” –Isaac M. (The Nothing)

“Although this cigar burned and smoked well, I can’t give a soft, squishy, under filled cigar high marks on construction. ” –Randy B. (randobush)

“I thought this was a pretty good cigar. It did not blow you away in any sort of flavor but was steady all the way until the end. Floral, nuts and bread pretty much ran this cigar for me. Would defiantly suggest this to someone.” –Jake P. (Jake P.)

“I found that this cigar could be a solid choice for an “”any time smoke””. There was plenty of flavor. Mild at times, but more flavorful at others. Nothing really remarkable about it, other than maybe a lack of cohesion.” –Isaac M. (The Nothing)

“Not a bad cigar as far as flavor, appearance and draw, the only real negative was the unraveling and cracking of the wrapper a third into it. ” –Joseph S. (Bearded Bastard)

“The overall hand feel of this cigar was super light, and didn’t feel like a premium cigar. Nice budget stick at best. The flavors were complex, particularly in the first and second third, transitioning out a few flavors in the final third. My intent to purchase would be zero, but it wasn’t a bad cigar, just not in my wheelhouse.” –Randy B. (randobush)

Blind Cigar Review: Perdomo | Estate Selección Vintage Sun Grown Imperio
Summary
"I thought this was a pretty good cigar. It did not blow you away in any sort of flavor but was steady all the way until the end. Floral, nuts and bread pretty much ran this cigar for me. Would defiantly suggest this to someone." -Jake P. (Jake P.)
Appearance
94
Aroma
92
First Third
93
Second Third
93
Final Third
93
Draw
95
Burn
95
Construction
94
Overall Experience
94
89
Very Good