Blind Cigar Review: Ramon Bueso | Olancho Vintage Torpedo. Ramon Bueso worked behind the scenes in the cigar industry for forty years alongside cigar industry legend Frank Llaneza at the Villazon Factory where Bueso learned all ins and outs of cigar making, and became a master of the craft.

When Ramon Bueso’s inaugural Genesis the Project cigar was released, the response from the market was very positive, and we reviewed it here and gave it an 89. This maduro beauty established Bueso’s artistry with the tobacco leaf and was followed up by the eventful medium-bodied Ramon Bueso Odyssey and the spicy Ramon Bueso Habano which we reviewed here and gave it a 90. Ramon Bueso Limited Edition Olancho Vintage represents Bueso’s magnum opus, the tour de force masterpiece he longed to make.

Ramon Bueso Olancho 2005 Reserva separates itself from the rest of the blends out there with its amalgam of refined aged long-leaves. The blend features a Colorado Oscuro Olancho San Augustin Sun Grown Ligero Wrapper, not fully fermented, covering an aged 2005 binder from Talanga Valley, and 2008 Nicaragua Esteli, 2010 Honduras La Entrada, 2008 Honduras Jamastran, and 2003 Honduras Olancho long-leaves. The under-fermented wrapper gives off a truly delectable flavor and aroma not found in other blends, and the aged fillers make this an evocative and mature experience.

“This a great looking torpedo shaped cigar with a dark chocolate wrapper. The surface of the cigar is almost granular with an almost oily sheen to it. There are no discolorations or any other blemishes to the surface. some veins are visible but not prominently felt.” –Sandeep (Djangos)

“The aroma titillates the nasal passage with: leather, earth, peat and a light chalk. Various burning woods, duke it out in my backyard fighting for the cigars profile.” –Matt C. (Big Matt) 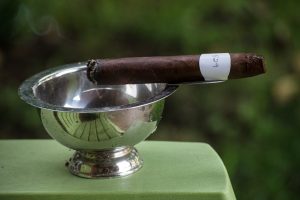 “The cigar starts off with a pepper blast but quickly settles down to allow the other flavors to shine through. The predominant profile is one of earthy flavors intermingled with more sweeter flavors of coffee and cocoa. There is also a definite nutmeg/clove like spiciness in the background as well. The flavors maintain themselves almost till the end of the third when a more woodsy profile is emerging. There is no issues whatsoever with the burn or the draw. The ash is firm and gray and holds the entire length of the third. There is a ton of creamy bluish white smoke.” –Sandeep (Djangos)

“This cigar starts out of the gates as a medium+ strength with a medium body profile that is creeping to the medium-full pedestal. We have oak, earth and leather on the exhale the retro flirts with various charred woods and it too has earth present. This cigar required me to cut it like a typical Cuban Monte 2, and what I mean by that is that I had to cut almost all the way up torpedo tip. The draw is firm but the smoke is copious and it is working well with this stick because it is becoming very nuanced. Construction is flawless in the first and the ash more salt less pepper holding on over a damn inch.” –Matt C. (Big Matt) 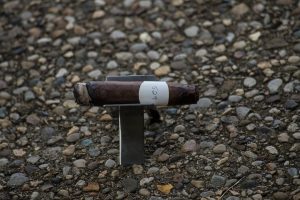 “The addition of some grasses in the background is about the only change. Leather and tobacco remain perfectly balanced and the fruitiness on the finish adds a pop of sweetness. The firm draw is most likely hiding additional flavors.” –Gregg (McGreggor57)

“The 2nd third has also been very nice. There is still the nice smooth creaminess to the cigar. The spice has been more of a chili spice than pepper.” –Wes (SosaCub4Life) 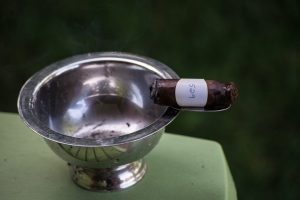 “The final third has the same earthiness but more so in the background. The predominant flavors now are one of tobacco and leather. the woodsy notes of cedar are also present but milder. The pepper is the star of this third and increases in intensity with a varying level of tingling to the tongue. It is almost pervasive in the entire mouth. It reaches a crescendo towards the end of the third. An excellent end to an excellent cigar.” –Sandeep (Djangos)

“Baking spices enter into the mix in the final third. We have a dominance of oak, leather, and earth. In the background there is a baking spice zing with the sweetness of the dark Corinthian raisins intermingling with the bread. This is an impressive offering. The retrohale is cream and mint begins to flirt with the leather. I have no idea what the blend on the cigar is, but it is obvious sample 529 was not his or hers first rodeo.” –Matt C. (Big Matt)

“The draw was very good throughout the entire smoke.” –Wes (SosaCub4Life)

“The mild flavors were excellent and well balanced, if not a bit limited. The oiliness of the wrapper added to the experience. Unfortunately my sample suffered from a very tight draw and subsequently went out a lot. Tasty, but a pain to smoke.” –Gregg (McGreggor57)

“Overall this was an excellent experience with a range of flavors providing complexity and retaining interest. I will definitely smoke this one again and will most likely get a box to age.” –Sandeep (Djangos)

“This is a cigar that I could see myself giving to a novice or a seasoned cigar smoker. The seasoned bloke will enjoy the change in pace of flavors presented on sample 529 and the novice will become introduced into the world of what a premium cigar can offer. This is a cigar that could be smoked and enjoyed after several other offerings as the profile is bold and evident. Construction was top-notch and however many hundred or thousand hands it touched before coming to fruition, it was worth it.” –Matt C. (Big Matt)

“Overall this was an excellent cigar. There was a great mix of smooth, creamy sweetness more at the beginning. It mixed in well with the spices that would transition between some chili type spice to some more pepper spice. Overall I really enjoyed this cigar. Very well balanced.” –Wes (SosaCub4Life)