The Spanish Market has always been dominated by Cuban cigars, but in the last decade, high unemployment and the high cost of Cuban cigars had driven the Spanish to search out alternatives. To address this new demand, The Quesada family brought Spanish Tobacconists to the Dominican Republic to work a cigar exclusively for Spain, and after a week of blending the Quesada España was born. Originally only available for Spain in three popular Spanish sizes, the Quesada Espana possesses a distinctive taste, yet is reminiscent of the Cuban cigars the Spanish are familiar with. It is available in three sizes: Robustos 5 x 52 box of 20, Short Robustos 4 x 50 box of 20, Coronas 5 ½ x 42 box of 20.

“This was a nice looking smaller gauge cigar that had no appreciable defects prior to my light. It was elegant and simple in appearance with no extraneous bells or whistles.” -Kent (Throck)

“The foot and wrapper both have notes of tobacco and earth, while the foot has a slight spice to it.” -Alan (Eulogy) 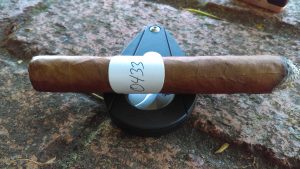 “A nice peppery woodsy note sets the stage as a little char begins to develop. Some dark roast coffee on the finish works well with the earthier flavors.” -Gregg (McGreggor57)

“This cigar opened up with some deep bread flavors and a slight citrus finish. The beginning of the smoking experience is pleasant and complex as the flavors begin to settle in. There is some sweetness that seems well restrained, but it is hard to pin down an actual name for it. For all its smoothness, there is a black pepper spice that gives the blend some needed edge and piques curiosity as to what is to come from this stick.” -Ryan (Youngryan216) 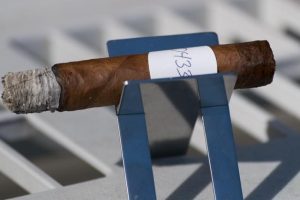 “There is a slight char to the oak that provides a contrast to the sweetness of cedar. The coffee on the finish continues to create a richness, although it’s fading in favor of a bit of leather.” -Gregg (McGreggor57)

“The spiciness that was present in the first third subsided slightly and a nice note of almonds/cherries started percolating to the top. It was a nice relief from the spice that was fairly notable in the first third.” -Kent (Throck) 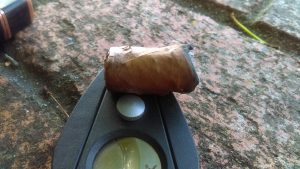 “Cedar and toast are the up front flavors with coffee and nutmeg rounding out the background. Some of the nutmeg finds it’s way into the retrohale giving a little surprise of spice. The balance of flavors are spot on.” -Gregg (McGreggor57)

“There was a slight profile change this third with the addition of some graham-cracker notes, but also a slight chemical taste that would come and go. The majority of the flavors are still tobacco, cedar, and pepper, with a peppery retrohale.” -Alan (Eulogy)

“The draw was a bit restricted in the beginning but this subsided nicely and opened up perfectly at the end.” -Kent (Throck)

“I had not issues with the burn. It was even and never threatened to go out. Beautiful plumes of smoke were able to be drawn from the cigar.” -Kent (Throck)

“A consistent firmness throughout. No issues.” -Gregg (McGreggor57)

“This was a good choice for a morning smoke. The profile had a consistent wood and earthiness to it while coffee, leather, char and toast worked together to provide a nice richness. The addition of some nutmeg at the end created a little spice on the nose.” -Gregg (McGreggor57)

“I was quite surprised by this cigar. I enjoyed the almost “dinner-like” qualities with this cigar. The spiciness of the first third was almost and appetizer and the final portion was quite sweet like a dessert. The only issue i had with the cigar was the tight draw in the beginning that eased up nicely as the cigar progressed. The construction, on the other hand, was never able to be rectified and bothered my smoking experience a bit.” -Kent (Throck)

“The draw and slightly chemical taste at the end took away from the overall enjoyment from this cigar. If the price was right, I would give it another chance just to see if it was a more enjoyable experience.” -Alan (Eulogy)

“When I lit this up, I was very intrigued by the pleasant aroma I was getting from it. My wife even commented on how good it smelled. The flavors were there, but the construction was not. After the midway point, the cigar really went downhill in terms of burn and smoke production.” -Ryan (Youngryan216)