The Quesada family has been in tobacco for four generations. Manolo Quesada started working at his father’s company before Castro came to power. After Castro, he was forced to leave and ended up in Dominican Republic, where he eventually started the MATASA factory today known at Quesada Cigars. The Manolo Quesada for Cuban Cigar Factory comes in three sizes: Robusto: 5″x50, $12.99 each or $259.98 for a box of 20, Toro: 6″x50, $13.99 each or $279.98 for a box of 20, Belicoso: 6.25″x52, $14.49 each, or $289.98 for a box of 20. The blend uses an Habano Ecuador wrapper, Ecuadorian binder, and Dominican fillers. It is rolled at the MATASA factory in the Dominican Republic, in collaboration with Ventura Cigar Company. They were shown off at IPCPR 2019 and shipped late summer. 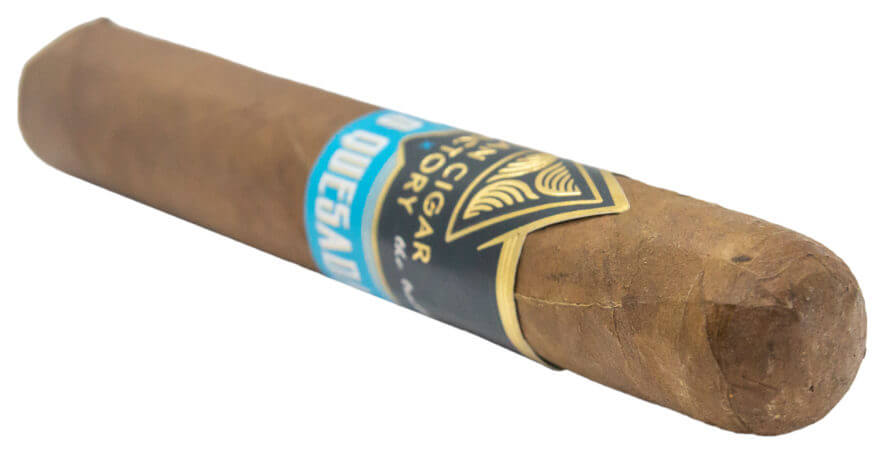 “Dark chocolate brown wrapper with nice oily sheen. The wrapper has some tooth and several small veins running throughout. The cap is very nicely applied and the cigar is firm to the touch.” –Kevin A. (Kevin A.)

“I was able to pick up aromas of dry grasses and wood, along with a bit of kitchen spice cabinet.” –Isaac M. (The Nothing)

“Strong notes of hay and cedar and some bitter leather are the first notes that hit the palate. The white pepper on the retrohale contributes nicely to the earthy notes on the palate. Strength is in the medium range but body is med to full. As the cigar progresses a green tea note is beginning to emerge on the palate. Burn is good, though the wrapper blew up on me and is causing serious burn issues.” –Kevin A. (Kevin A.)

“Immediate bold cedar on the draw and a very dry spice on the retrohale. The pepper on the nose rules supreme early on.” –Matt Cade (CADE)

“A nice, smooth mineral note joins in on the retrohale and it works well with the steadily increasing strength of the spice. A touch of French Roast coffee shows up to accompany the cedar on the draw which is welcome.” –Matt Cade (CADE)

“The flavor profile has really stepped up getting to the end of the cigar. There is still green tea, but the pie crust sweetness is now joined by black coffee and cinnamon making an almost dessert like cigar. The white pepper on the retrohale is still present and is still silky smooth and very pleasant. Burn is still very good and the ash is no longer flaky and is tightly packed.” –Kevin A. (Kevin A.)

“This cigar kept on coming with the smorgasbord of toasted grains, wood and kitchen spices that it offered up since the very

beginning.” –Isaac M. (The Nothing)

“One of the highlights of the experience. It was a near perfect draw with just about the right amount of resistance for me.” –Alan (Eulogy)

“The smoke output I found to be quite generous, and the ash held through each third.” –Isaac M. (The Nothing)

“There’s sort of a laundry list of problems with the construction. The foot was under filled, the cap was too small and allowed the wrapper to come undone a bit, numerous chips in the wrapper, cracks formed allowing large spots of the wrapper to unravel, and the head was spongy giving an unpleasant mouthfeel.” –Alan (Eulogy)

“When I get something that’s this off I hope that it’s a fluke and the other reviewers have a totally different experience. There’s just so many things that threw off my enjoyment it would sound like a roast if I really put words to them. If you ever wanted to taste what a leathery paper bag is like, this could be the cigar for you. If you dream of a cigar that gives off a thin quality smoke then look no further. If you buy boxes of Cubans looking for the chocked full of ammonia sick ones then I’ve got the cigar of your dreams.” –Alan (Eulogy)

“Sweet notes of honey to start. Other notes include grass, cherry, and tea. Not a stick I’d go out of my way to purchase. Veiny construction leads to splitting later. A very rushed stick to get into our hands.” –Sean F. (fullermaine)

“This is a nice smoking cigar that delivers several familiar flavors in a very familiar way. If it’s in the right price point you’ll be satisfied; however, if you’re paying premium you might be left wanting more…” –Matt Cade (CADE)

“From the second third to the end, this cigar was a star. The flavors were on point, very pleasant on the palate and complemented each other well. The retrohale was smooth and about the best experienced in a while, very reminiscent of a classic Cuban cigar. The blown up wrapper made for a fight to save the cigar in the first third, and just can’t be ignored without another sample to compare it to. I definitely want to smoke this cigar again, and the second and final thirds were outstanding. The strength is right on the edge of medium, almost medium full, and the body was medium full without question. I look forward to trying another one of these to see if it holds up like it should.” –Kevin A. (Kevin A.)

“Oh my how I loved this cigar. While it did not offer up any transitions along its length, from the very start it did offer so many varying flavors that a change of profile would have ruined the experience. The aroma was also quite nice when the smoke hit the nostrils. I’m looking forward to smoking a lot more of these in the future.” –Isaac M. (The Nothing)

Blind Cigar Review: Ventura | Manolo Quesada for Cuban Cigar Factory Robusto
Summary
"Oh my how I loved this cigar. While it did not offer up any transitions along its length, from the very start it did offer so many varying flavors that a change of profile would have ruined the experience. The aroma was also quite nice when the smoke hit the nostrils. I'm looking forward to smoking a lot more of these in the future." -Isaac M. (The Nothing)
Appearance
86
Aroma
89
First Third
88
Second Third
88
Final Third
89
Draw
94
Burn
91
Construction
88
Overall Experience
86
88
Overall Score