The San’Doro name pays homage to the times of Christopher Columbus. The name San’Doro is actually derived from “Indorum Sana Sancta” which translates to “Sacred Herb of India”. During the time of Columbus’ expeditions, many thought he had found the route to India and when tobacco was brought back, it was referred to as “Indorum Sana Sancta”.

“Toro sized with a light brown wrapper. The surface is quite smooth with some minor veins visible but not too prominent to feel. There are no other discolorations and other blemishes present. There are 3 well placed caps present.” -Sandeep (Djangos)

“Once lighting this sample, my yard smells of fruit, cream and a light white pepper lingering thru the air.” –Matt C. (Big Matt) 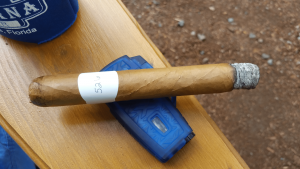 “When the fire hit this cigar, the flavor and smoke output came on quickly. That being said, they were not overpowering. The flavors were subtle and smooth. Creamy coffee, cinnamon, and something like dried hay. The smoke was plentiful but it had a very smooth texture.” –Matthew T. (A Huge Nerd)

“The exhale is white pepper, cream, cinnamon, nutmeg and nuts. Retro is breakfast fruit, pepper, and cedar. Construction is near perfect with the ash holding on the whole way thru this third. Grass flirts with the profile but hasn’t formally entered yet.” –Matt C. (Big Matt)

“As the second third began, flavors were very consistent. The profile was still dominated by cedar and cinnamon, but some nice additions came in. Some fruit sweetness, almost like apple but I just could not define it exactly. There was some nice mild sweet spice on the retrohale, like nutmeg or allspice. The creamy texture remained and the burn was very sharp.” –Matthew T. (A Huge Nerd)

“Body and complexity ramp up in the second third. The retro is where the majority of the cigars profile is to be found with the very enjoyable fruit notes, cream, nuts and pepper. Palate is coated in cinnamon and the back of the throat picks up a slight sweetness. This is definitely a smoke I would suggest to be first thing in the morning maybe even before a meal to experience the blenders intent.” –Matt C. (Big Matt) 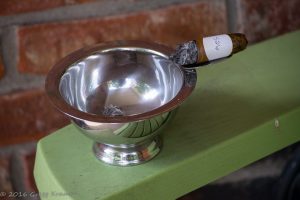 “The profile remains very much the same and that is not a bad thing. The fruit on the retro is the belle of the ball. The palate is coated in cinnamon and nutmeg. A maple syrup like sweetness dances on the tongue. Cedar ramps of in this third but never overpowers the profile.” –Matt C. (Big Matt)

“The final third is a great blend of optimum levels of pepper and leather. Interspersed with these flavors are wisps of cocoa and cedar. There is also some very faint almond like nuttiness in the back ground. over all the best and most complex of all the thirds. the pepper rises fast in the very last half inch reaching a crescendo. No issues with the draw or the burn.” -Sandeep (Djangos)

“A little inconsistent at time although there were no issues at the extremes.” -Gregg (McGreggor57)

“Cigars should be easy to smoke, and this one delivered on that. I lit the cigar one time and let the flavor profile and big smoke output do the rest. While it was not overly complex or powerful, it still offered a smoking experience that I would enjoy doing again. Flavorful and smooth.” –Matthew T. (A Huge Nerd)

“If you are looking for a well constructed Connecticut shade cigar this might be it. This cigar reminded me of a lighter version of the Quesada 40th Corona Clasica. The fruit on the retrohale mixed in with the pepper and cinnamon on the palate and the sweetness in the back of the throat were all very enjoyable. I easily recommend this cigar if your palate yearns for flavors in the mild strength category with body and complexity that hold up and build throughout the whole experience.” –Matt C. (Big Matt)

“Those who like cedar and grasses will probably find the cigar enjoyable if not a bit one dimensional. Some baking spice, leather and minimal cocoa were in the mix although short lived. A nice enough cigar to smoke while doing something else.” -Gregg (McGreggor57)

“Overall this cigar just wasn’t for me. To mild, not enough flavors… its everything I worry about when I smoke a Connecticut. During the last 3rd the overall spice did pick up and some sweetness came in to make that last 3rd OK. Now this may be a $20 Cuban cigar and that’s fine.. it’s just not for me.” -Wes (SosaCub4Life)

“Overall this was good cigar that started off slightly bland but ended with a very complex profile. I will definitely try this one again.” -Sandeep (Djangos)