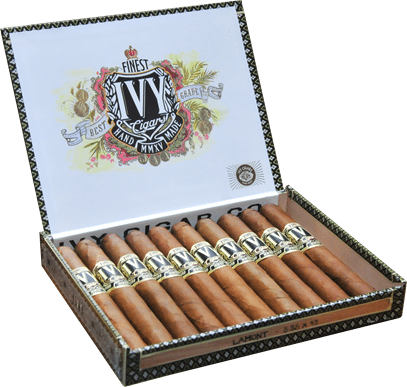 April 27, 2016 – Jason Holly will unveil the release of “Ivy” at an exclusive event at Casa de Montecristo in Countryside, IL on Thursday, April 28th. “Ivy” is a project that although under parent company Viva Republica will boast a completely different personality – initially Ivy will only be sold in 100 specially selected retail shops.

The first batch of “Ivy” is an Ecuadorian Habano Corojo wrapped expression of a complex but balanced set of earthy and fruity flavors partly derived from its double binder of tobaccos from Cameroon and the Dominican Republic. Inside the alluring wrapped is a blend of high primed filler leaves from the Dominican Republic’s Cibao Valley and Nicaragua’s Estelí and Condega regions.

The Ivy concept was born out of sort of transfixing the style and mannerisms of the Ivy League. Jason Holly said, “I used to smoke cigars in Harvard Yard when I was in school. In a store on the square I saw an old picture of JFK smoking a cigar in the Yard, the history and tradition is overwhelming and I wanted to create a brand that had that feel of nostalgia.”

While the cigar is full production it is only being offered to an initial 100 accounts. “There’s a very specific growth plan that we have conceived to properly introduce Ivy to the marketplace,” said Jason Holly, owner of Viva Republica, parent company of Ivy.

This release and endeavor undoubtedly askews the previous Viva Republica releases but doesn’t necessarily signal a change for the company. “Ivy is a just another side of what we do and was designed to help connect with cognoscente consumers whose buying patterns tend to diverge from the core Viva offerings which are more value positioned.”

It’s not the same style cigar as you may expect from Viva Republica, focused on well-aged and nuanced tobacco rather than the typical power-forward blends Viva Republica has produced such as Advanced and Guerrilla Warfare. Ivy ships in ten count boxes designed by noted illustrator Glenn Wolk, who has done product design for the likes of The
Beatles, Ralph Lauren and Tommy Hilfiger.

Holly said there will be future blends and releases in the Ivy line but would not reveal how or when new accounts would be added. As typical with other Viva República products, Ivy is produced at La Aurora, S.A. in partnership with Don Guillermo León and exclusively distributed in the United States by Miami Cigar & Co.