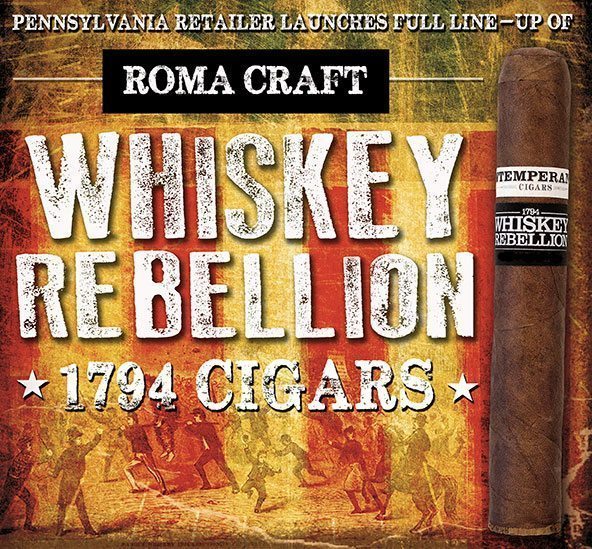 EASTON, PA–(Marketwired – July 21, 2016) – Famous Smoke Shop, a leading online distributor of discounted premium cigars, has announced a new line of cigars in conjunction with RoMa Craft Tobac. The cigar retailer specializes in offering the web’s widest selection of cigars at the lowest prices — and their newest selection is named Intemperance WR 1794. Already made immensely popular due to an early, limited edition release with CigarDojo.com, RoMa Craft has added multiple sizes within the brand, all of which will be made for sale only through Famous Smoke Shop. RoMa Craft’s Intemperance line has been on the market since 2012 which includes the Intemperance EC XVII, and Intemperance BA XXI.

Whiskey Rebellion 1794 cigars by RoMa Craft Tobac take their name from the protest known as the Whiskey Rebellion, which began in 1791 under George Washington’s presidency. Washington’s Treasury Secretary, Alexander Hamilton, introduced a tax on all distilled spirits in an attempt to lower the nation’s debt without raising the nation’s already-high import taxes; the Whiskey Tax was the first tax on domestic goods in United States history, and was roundly — and vehemently — opposed by many rural American communities.

RoMa Craft Cigars owner Skip Martin embraced this outrage and insurrection as the inspiration for the newly expanded cigar line. “Our forefathers believed the Whiskey Tax to be illegal, under the idea that there was no local representation,” said Martin, “and they stood their ground. What this cigar represents to me, then, is that when faced with tyrannous taxes and regulations — we must resist.” It’s his nod to how Hamilton’s tax resulted in conflict between citizens and law enforcement, when 500 armed men in Western Pennsylvania rose up in dissent; Washington called militias from the surrounding States to quell the rebellion, though no violence erupted. Skip noted, “but the message that these Whiskey Rebellion patriots sent, was received.” The Whiskey Tax was eventually repealed by Thomas Jefferson, after federal agents struggled to enforce it.

Whiskey Rebellion 1794 cigars feature a complex blend of Nicaraguan and Dominican longfiller tobaccos, an Indonesian Besuki binder, and Ecuadorian Habano wrapper, and comes in multiple sizes — each named after an instrumental political figure who had a hand in the creation and abolition of the Whiskey Tax. After sampling the new Whiskey Rebellion cigar, Famous Smoke Shop Copywriter & Cigar Advisor Jonathan Detore said, “All of us here are extremely excited about taking on this incredible line of cigars. The smoke is bold and flavorful, with a profile that will appeal to many cigar smokers. With so much history behind this cigar, especially in the state of Pennsylvania where our company is based, we are especially proud to make this a long-term addition to our wide selection of premium cigars.”

Intemperance WR 1794 Cigars will debut Monday, July 25 at the International Premium Cigar & Pipe Retailers’ 84th Annual Convention and Trade Show; available exclusively at Famous Smoke Shop, it will arrive for sale in five sizes: a 4 x 46 Hamilton, 4 ½ x 52 Jefferson, 5 x 50 McFarlane, 5 x 56 Bradford, and 5 ½ x 54 Washington. The majority of the line offers 24 cigars per box, while the 4 x 46 Hamilton vitola offers 30 cigars in each package. With Famous’ full discount pricing, customers will enjoy this new offering with individual retail prices ranging from $6.15 to $8.00 per cigar. The first shipment will arrive at Famous Smoke Shop’s warehouse in August; and while the company has expressed that the new brand will be a consistent offering for the foreseeable future, Whiskey Rebellion cigars will be available in limited quantities.