“Right off the bat, I noticed that this one isn’t the prettiest lancero I’ve come across. It has a couple of lighter spots and small veins running along its length.” –Milton (mjohnsoniii) 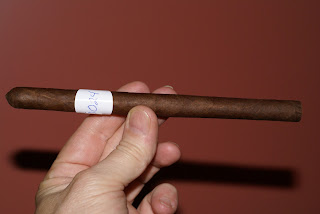 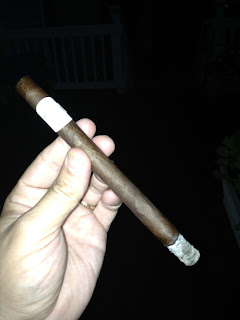 “Initially quite smooth. Rich chocolate, with espresso and wood undertones. Flavor is thick and syrupy, and the smoke is creamy. Burn from the start is razor sharp. At an inch in, the espresso becomes the dominant flavor, the cocoa settling in the back. Dry wood, cedar spices and black pepper remain in play as well. The smoke seems to be alternating between a dry smoke and a thick creamy smoke. At about two inches, the pepper kicks it up a notch and coats the palate.” –Derek (lilninjabuddy)

“Through the second third, spice dies down but is replaced with a nice creaminess with some sweetness and almost like a raisen flavor as well. Nice flavors. Having a little trouble with the draw and smoke production starting into this third of the smoke” –Nicholas (volpow61) “At the start of the second third, the flavors do not change, but their strength does. The flavors take turns at the front. Wood, pepper, cocoa, espresso and the cedary spice all appear as the primary flavor, taking their turn literally from puff to puff. While not especially complex, the cigar is proving quite interesting! At the midway point, a slight raisiny sweetness appears. Not quite to the strength of a Fuente Unnamed, but very similar in nature.” –Derek (lilninjabuddy)

The flavor profile from the second third continues through most of the final third.  Earthy and leathery.  A little spice on the finish.  Still getting some hints of chocolate, too.  Toward the end of the final third, I start getting a little soapy bitterness.  Not bad, interesting.” –Brian (B-daddy) 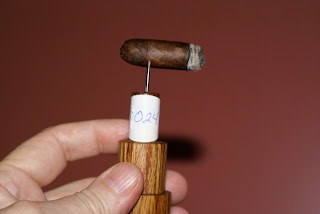 Changed directions with lot’s more wood, coffee and peppery tobacco flavors the closer to the end it got.” –Ron (shuckins)

“Tight draw most way through especially mid way to the end.” –Nicholas (volpow61)
“Good burn from start to finish (almost).  Surprisingly good smoke volume for a small ring gauge.  However, with about an inch to go, the cigar suddenly goes out.  (Might have had something to do with ~100% humidity outside.) Weird.  Flavors weren’t good when I relit, so I just ended it there.” –Brian (B-daddy)

“Despite the tight draw, the flavors of this cigar were quite pleasant. I know draw issues are prevalent with lanceros, and are simply inherent to the format. I’m betting this would go from a good cigar to a great cigar without the overly tight draw. Definitely one I’d want to revisit.” –Derek (lilninjabuddy)
“I’ve never been a huge fan of lanceros, but lately, they have been very good and this is yet another one that proves it. I’m definitely going to be adding more to the stash for future smoking enjoyment. Hopefully these will be some that will be relatively easy to get a hold of.” –Milton (mjohnsoniii)
“I enjoyed this cigar.  Nice flavor profile and good burn/construction throughout.  However, I got a little bit tired of the flavors after about an hour and a half.  Maybe if the last third would have evolved a little, it would have been “great.” –Brian (B-daddy)
“Overall not an enjoyable smoke to me only because of the draw and smoke production couldn’t produce any good flavor past the mid way point.” –Nicholas (volpow61)
“I enjoyed this cigar, it was never boring, had lot’s of flavor changes, and built to a very nice finish.” –Ron (shuckins)