Rafael Nodal and his spouse Alina were travelling to Spain in 2004 when Nodal was intrigued with a technique of aging wine referred to as Solera. This entails melding vintages of wine together, and the end result is a mixture of wines of different ages. Nodal researched more about this process and thought the idea may be carried out to the ageing of tobacco. Tobaccos from unique vintages are mixed into bales and aged together, resulting in a marrying of the tobaccos before rolling. In 2005, Nodal and Bischoff released versions of Solera cigars as house blend cigar in their shops in Miami Lakes, Florida.

Each of the four wrappers is available in three vitolas: Festivo (4.7 x 52), Fantastico (5.6 x 54), and Fanfare (6 1/8 x 57). The cigars will be packaged in 21 count boxes. Different different color patterns will be applied to each blend, making them identifiable. Boutique Blends claims that this new technique is a more cost effective process so they are able to offer sticks all for under $8 a piece. These cigars are aged and rolled at Tabacalera Palma in Santiago, Dominican Republic.

“The appearance on this cigar is almost flawless. The wrap lines are almost completely invisible and there are only a few medium size veins that even break up the lines at all. The cigar itself is a semi-oily dark brown wrapper with a triple cap applied almost seamlessly along the neck, and it is topped off with a pigtail on top.” –Jeff (ExpendableYouth)

“The aroma coming off of the foot is a warm barnyard and hay odor, and a black pepper finish.” –Jeff (ExpendableYouth)

“The first-third starts with black pepper, coco, leather and espresso. The retro-hale has a chocolate and earthiness to it. The draw and smoke output are spot on and I’ve had no construction issues so far. The pepper fades to the back of the cigar and the coco, leather and espresso notes really start shine in the later part of the first-third.” –Jeff (ExpendableYouth)

“Cigar is certainly in the full-bodied category. Tastes have continue to yield a pleasantly rich earthy taste, however, a woody element has now been factored in to please my palate. Cigar has become very bold and minor bitter notes have replaced the white pepper my palate once experience (not bad bitterness, more like that found in a strong cup of black coffee). Aroma is still enjoyable and the room is haunted by a lingering thin white smoke.” –Kyle (kaleehb) 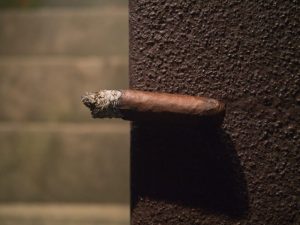 “The final-third has picked up in strength from both the pepper and the mineral notes of the earlier thirds. The leather and espresso are still there but they are now background players to the leading notes. The construction has been spot on from the beginning and I have had no issues to speak of, also the draw and burn have been perfect as well.” –Jeff (ExpendableYouth)

“The draw was spot on throughout the cigar and produced copious amounts of smoke.” –Jeff (ExpendableYouth) 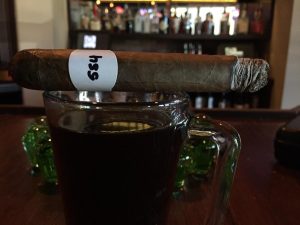 “This was a really nice and complex smoke. The coco, espresso, leather, mineral and pepper all had independent moments where they equally shined. The cigar was a bit strong for me in the final-third, but other then that it was a really pleasant cigar. I would give this one a try and see how it fits in your wheelhouse.” –Jeff (ExpendableYouth)

“Overall, I very much enjoyed this cigar. Tastes became a bit distorted in the end, but for the most part cigar was a real treat. If you like a nice bold smoking experience this cigar would be a solid choice. I will probably look to pick some more of these up to see if some time in the humidor smooths out the finish.” –Kyle (kaleehb)

“A very solid stogie that would be a perfect accompaniment to coffee at any time during the day.” –Stefan (Stefan)

“I really enjoyed this cigar. The pepper & sweetness mix was outstanding. The body & complexity rounded each other nicely.” –Jeff R. (JR)