The new Davidoff Yamasá has been 20 years in the making. It all started out with Master Blender Henke Kelner’s dream to turn the unforgiving swampland of the Yamasá region into a successful tobacco-growing field. When everyone said it couldn’t be done, Henke persisted. He held an unwavering belief in the natural bounties and potential for the land.

On an endless pursuit to bring new tastes, experiences and pleasures, to all cigar lovers, Henke Kelner and his team of experts relentlessly nurtured and cultivated the Yamasá soil – a soil that was reluctant to change. Discovering that the soil contained too much sand and loam, they added nitrate and calcium by hand to each and every single tobacco plant. In Henke’s own words, they “continued, continued and continued” until they got it right.

“Dark chocolate wrapper with medium veins. No soft spots and a firm roll. You could really thump somebody with this cigar. Double capped toro.” –Adam B. (Bushboy)

“I get an immediate hit of sweet spice and vanilla from the foot, while the wrapper is more subtle. Cocoa and leather. The cold draw has a definite pepper zing along with some grassy notes.” –Matthew T. (A Huge Nerd) 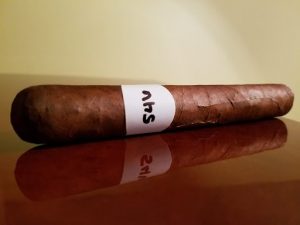 “This blind cigar offering starts off as a pleasant medium bodied offering. Immediately upon post light, I want a Bourbon Manhattan cocktail. The exhale is oak, leather, peat, and black pepper. The mouthfeel is chewy, finish is medium. The retro is that of white pepper, warm whole milk and various wood undertones. Ash is charcoal in color and remains dense.” –Matt C. (Big Matt)

“There is a very light white pepper that sits on the sits on the tip of your tongue and lightly builds as I continue to keep smoking. The draw has a nice resistance, and the smoke output is spot on. There is a rich tobacco, a subtle sweetness, white pepper and some earthy mineral notes. While there is not that much pepper on the draw the retro-hale has quite a bit of black pepper and woodiness to it. The ash is a little flaky but otherwise the construction in the first third has been really good.” –Jeff (ExpendableYouth)

“In the second third the strength remains medium, but the body ramps up to the medium-full category. We still have the dominance of the oak, leather, and peat on the exhale. Finish remains chewy, mouthfeel is good. The cigar feels very balanced in the hand. Construction remains top notch, draw is as cool as the other side of the pillow. Retro is warm whole milk, with the addition of various dried chiles that tingle the nasal cavity.” –Matt C. (Big Matt)

“Second third is delivering. Excellent aroma and mild, pleasant smoke packed with flavor. I can’t quite pinpoint the nutty, earthy flavors, but they are melding together nicely. This cigar is the welcome mat of autumn, and definitely a must try. Boutique flavors, with the consistency of a seasoned brand….” –Adam B. (Bushboy) 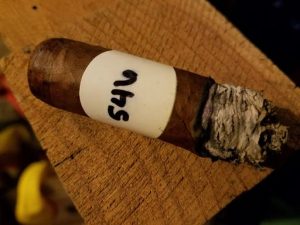 “In the final third the cigar begins to build upon itself and settles into the medium-full category in both strength and body. The complexity in this offering keeps the mind engaged. The retro is now classic pepper and cream.” –Matt C. (Big Matt)

“The final-third has picked up in strength considerably and there is now an oily pepper that coats the entire mouth. There is still a lot of woodiness and the earth and mineral notes have subsided quite a bit. The retro-hale is still predominated by wood and pepper but is not overwhelming. The only construction issue in the final-third is the flaky ash that has been there the entire time and it really hasn’t detracted from the cigar only added a bit of annoyance.” –Jeff (ExpendableYouth)

“The draw was open and workable throughout the cigar. No issues here.” –Matthew T. (A Huge Nerd)

“The burn was spot on throughout thee cigar and never waivered or needed a relight.” –Jeff (ExpendableYouth)

“Aside for the flaky ash the cigar had no construction issues. It was a little annoying to have to worry about dropping hot ash on myself, but other than that there were no issues.” –Jeff (ExpendableYouth)

“I like what this cigar had to offer, and I have no idea what it is. Looking at this cigar blind you would never know how it would perform or taste. Fortunately, I was very pleased with the oak, leather and peat that it offered up; throw that in with very unique warm milk, pepper and dried chile notes on the retrohale, I’m damn sold. This is a cigar, I would recommend to the seasoned cigar guy or the novice as the flavors are unique and engaging for various palates alike.” –Matt C. (Big Matt)

“I really enjoyed this cigar and anxiously anticipating the reveal. Looking forward to adding a few to the humidor. Enjoyable flavors, almost perfect cool burn, and just a flat out good cigar. Bravo.” –Adam B. (Bushboy)

“Man, I really wanted to love this cigar. It smelled so good pre-light, and the first third was showing potential. It just couldn’t hang on. The profile from the beginning was overshadowed by some ammonia notes that would probably disappear with age. I would be willing to try this one again in 6 months to a year. As always, I am very curious to find out what it is.” –Matthew T. (A Huge Nerd)

“The cigar had really good core flavors and performed flawlessly other then the flaky ash issues. The first two thirds were a bit light, but the strength picked up in the final-third and added a nice dimension at the end. This was a solid cigar and if the price was right I would say go for it.” –Jeff (ExpendableYouth)