In June 2017 Cigar Dojo announced they had partnered with Camacho to bring us the Cigar Dojo Imperial Stout Barrel-Aged by Camacho. Cigar Dojo, is the world’s first and largest social cigar app.

In 2015, fresh off the heels of Camacho’s ground-breaking introduction of the American Barrel-Aged cigar—where Camacho mastered the art of barrel-aging tobaccos in used, American whiskey barrels—the brand partnered with Cigar Dojo to highlight the unique characteristics from barrels of a different variety. With Cigar Dojo being based out of one of the top craft beer meccas in the country (Denver), the decision became obvious on how these two brands would collaborate. 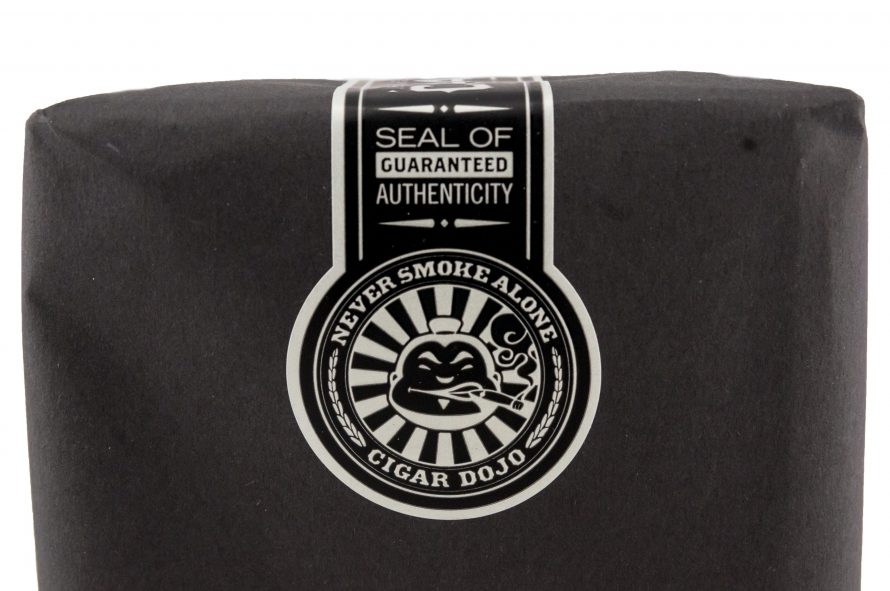 Cigar Dojo & Camacho announced Imperial Stout Barrel-AgedFor Cigar Dojo, the quest then became centered around the best, most quintessential local brew to represent Cigar Dojo, Colorado craft beer, and the Cigar Dojo community’s demanding palates. This choice materialized in the form of Ten FIDY by Oskar Blues, which is brewed out of Longmont, Colorado and has long been a favorite among craft beer/cigar enthusiasts on the Dojo app. But while the intentions were noble, the approach had been flawed from the start—as Ten FIDY is simply a high gravity imperial stout, lacking the barrel-aged requirement for the project. On a whim, Eric (aka Master Sensei), owner of Cigar Dojo, contacted Oskar Blues in hopes that the brewery had been experimenting with barrel-aging the Ten FIDY recipe. Not only had they been experimenting, but Oskar Blues had recently finished their first mass effort at canning Barrel Aged Ten FIDY for the company’s first “official” release of the beer! Thirty barrels were used to age Ten FIDY, and Camacho/Cigar Dojo managed to secure four such barrels after the beer had been dumped. While multiple barrel types were used to bring the eventual beer to market, the four barrels selected for this project were from Heaven Hill Distilleries, located in Bardstown, Kentucky and the producer of other Dojo favorites—such as Larceny, Elijah Craig, and Parker’s Heritage.

Camacho then shipped these four barrels to their facilities in Danlí, Honduras, where Camacho’s prized Original Corojo tobaccos were meticulously aged and rotated within the beer and whiskey-soaked barrels for a minimum of six months. Here, the barrels began to impart their unique characteristics of roasted malt, charred oak, and sweetness of the original whiskey to the Honduran tobacco leaves. This process differs from other beer barrel-aged projects, as the tobaccos are allowed to ferment inside the barrels prior to being rolled; making for a more traditional, sophisticated, and complex experience when compared to cigars that have been rolled prior to barrel-aging. The barrel-aged Original Corojo leaves were then paired with Brazilian and Dominican maduro leaves in the cigar’s filler, an Original Corojo maduro binder, and a San Andrés maduro wrapper; allowing the unique characteristics to shine through without becoming too overpowering. Cigar Dojo Imperial Stout Barrel-Aged by Camacho kicks off with a punchy spice, which is later rounded out by loads of roasted malts, dark chocolate, and a touch of sweet vanilla/bourbon buzz in the retrohale.

This all-maduro blend is based on Camacho’s world-renowned Triple Maduro cigar, making slight adjustments to accommodate the added attributes imparted from the barrel-aging of the Original Corojo leaves in the cigar’s filler. This makes for a whole new spin on a fan-favorite classic! In addition, Imperial Stout Barrel-Aged marks the first time that Camacho’s Triple Maduro has been introduced in a Toro vitola.

Imperial Stout Barrel-Aged is not only a unique collaboration between Cigar Dojo and Camacho, but Smoke Inn Cigars as well. As such, the cigars will be sold exclusively through Smoke Inn’s online store and Florida-based brick & mortar locations. A very limited allotment of 4,000 cigars (400 bundles of 10 cigars) were been rolled for the first batch of this project, with the potential for additional cigars in the future.

Now, Camacho and Cigar Dojo have announced that the final shipment of these unique cigars will soon be available for a second release. As with the initial sale, 400 bundles of 10 cigars will be offered in the same, 6” x 50 Toro size. For this, the second release of Cigar Dojo Imperial Stout Barrel-Aged by Camacho, the cigars are from the very same batch as the original shipment. Indeed, ISBA offers the very same size, blend, and batch seen on the first shipment. The only difference will be the additional 3 months the cigars were allowed to age (between the original release in June and the second release in late September). Imperial Stout Barrel-Aged will be available for sale exclusively through online retailer SmokeInn.com. 400 bundles of 10 cigars will be sold on a first come, first serve basis. The sale will begin on September 29th, 2017 at 12pm eastern time.

Here is a video from the Cigar Dojo crew cracking open the Ten Fidy Barrel-Aged Tobacco.

“This is a handsome Toro sized cigar that is sporting a dark chocolate brown wrapper leaf with medium veins and practicallyinvisible seams. The triple cap is perfectly applied and the foot is squarely cut.” –Jason H. (Jokey Smurf)

“On the body I am getting a heavy cherry mixed with incense, but not just any incense, Nag Champa baby, oh yeah! I am getting mostly manure on the foot. ” –Mickey T. (irratebass)

“Very good flavor combinations. The draw is a little tighter than i would like. It is quite a complex cigar with a lot of layers. With the combination of flavors i get a red wine type of flavor, but some individual flavors i can pick out are earth chocolate and a barely detectable sweetness i cant put my finger on.” –Ryan H. (Ryan H.)

“On the prelight I am getting milk chocolate and some vegetal flavors. The draw is snug, but not tight. Right away I am punched in the face with spice & black pepper. It starts to calm down a tad and dark chocolate not milk chocolate, but DARK appears. A hangnail forms on the ash, other than that though it’s a beautiful well rounded white ash. Vegetal elements mixed with meat or bacon , cream, or butter, but very light on the butter please. Black pepper comes back, and brings white pepper with him. They have a nice long finish that stays. Halfway into the first, and milk is moving into first place. ” –Mickey T. (irratebass)

“The second portion of this cigar remained deep and spicy both on my palate and through the nose. The finish remained earthy and long, leaving my tongue tingling for 30 seconds at a time. I’m wishing I had something stronger than water for this review… This would pair well with a good bourbon or triple IPA…” –Jason H. (Jokey Smurf)

“The second third was a continuation of the first, but brought along a few more flavors. Most notable was a charred-wood on the retro which finished things quite nicely. The main flavor had a nice creamy latte hit which seemed to be much smoother than the first third. ” –Isaac M. (The Nothing)

“The final third was much like the first two, but was nuanced even more. Creamy coffee, toffee, dank earth. This cigar was showing that it had a lot to offer for just about anyone.” –Isaac M. (The Nothing)

“Strong finish for this cigar. Flavors are still oaky, nutty with an underlying sweetness. Rather long finish that has hints of cloves. Burn has been fantastic and the smoke out put is superb. ” –Adam B. (Bushboy)

“The draw started off just a bit tight but loosened up to the point that at the end it was nearly perfect for me… Smoke output was excellent throughout.” –Jason H. (Jokey Smurf)

“This cigar burned well, start to finish, without the need for touch ups. ” –Isaac M. (The Nothing)

“With the exception of the initial tightness, the construction was nearly perfect in this sample… From the bunch to thewrapper this is a fine example of the rolling art.” –Jason H. (Jokey Smurf)

“I really enjoyed the complexity of this cigar. The flavors produced were very nice. Props to the manufacturer ” –Ryan H. (Ryan H.)

“This was a very tasty cigar that transitioned quite nicely. It was a bit strong, so I wouldn’t say this is a first cigar of the day, but maybe your second or after dinner smoke. I believe it would compliment your dinner well. I am curious to know what this was, and would like to grab some more. ” –Mickey T. (irratebass)

“I like a full bodied cigar but this was just a bit too much in the middle portion… I’m betting a nice nap in the humidor would smooth things out nicely and settle the middle down to where I like it. In totality this was nice but I would prefer some more nuance versus the punch in the mouth I experienced.” –Jason H. (Jokey Smurf)

“I enjoyed this cigar very much. The woody and nutty flavors were fantastic and the performance showed off the high quality tobacco and expertise of the roller. The nice white ash was a great contrast to the dark wrapper and looked fantastic while smoking. I will pick up a few more of these in the future. Definitely recommend trying this cigar if you like a full flavored smoke with a good transition from start to finish. ” –Adam B. (Bushboy)

“From start to finish, this was a pretty good cigar. But. Yes, there is is always a but… This cigar didn’t show vast, or any, for that matter, changes from the beginning to the end. In this case, though, that didn’t prove to be a bad thing. It was pretty solid from the start to the finish. Ultimately I just wish it had a bit more to offer as it did start to get bland and monotonous. ” –Isaac M. (The Nothing)

Blind Cigar Review: Camacho | Imperial Stout Barrel-Aged
Summary
"I enjoyed this cigar very much. The woody and nutty flavors were fantastic and the performance showed off the high quality tobacco and expertise of the roller. The nice white ash was a great contrast to the dark wrapper and looked fantastic while smoking. I will pick up a few more of these in the future. Definitely recommend trying this cigar if you like a full flavored smoke with a good transition from start to finish. " -Adam B. (Bushboy)
Appearance
91
Aroma
90
First Third
91
Second Third
91
Final Third
90
Draw
91
Burn
96
Construction
90
Overall Experience
92
91
Very Good