“This petite lancero has a rich brown color to it. The wrapper is smooth and uniform with slightly raised wrapped lines. It has a well applied single cap, and is a pretty good looking cigar overall.” -Jeff (ExpendableYouth)

“Aromas of milk chocolate and leather emanate from the wrapper, with an additional component akin to mesquite charcoal coming through on the cold draw.” -Stefan (Stefan) 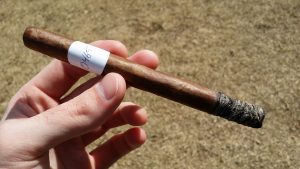 “This cigar began with light notes of cedar and white bread with a subtle sweetness. After the first few puffs, the stick settles in and a delicious caramel note comes through. I have to say, I am very impressed with the balance and restraint of the blend so far. With enough body and complexity to be interesting to the smoker, the blend is subdued as far as spice and strength. I am digging this.” -Ryan (Youngryan216)

“There is some nice peppery spice to the cigar at the start. I am picking up some of the sweetness that I got off of the aroma. It is burning amazingly well for a lancero. Great draw, burn, smoke production, ash.. everything. So far so good.” -Wes (SosaCub4Life) 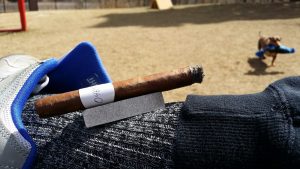 “Strength drops to medium intensity at the beginning of the first third while the flavor profile exhibits a balanced trifecta of nutty, spicy, and savory notes. Very soon a creamy undercurrent becomes noticeable, backed by cocoa bean notes; together these give the impression of cafe au lait flavors. By the midpoint the initial nutty component is replaced by woodsy notes. Strength then increases and flavors become darker as the burnline approaches the final third.” -Stefan (Stefan)

The cigar has never exceeded medium strength, yet retains a higher-than-average complexity of sweet cedar, toasted bread, caramel, and at times, fleeting notes of citrus peel. For me, the flavors have not changed since the first third, instead the profile has gained a pleasant orange peel bitterness that is balanced by the sweetness of the cedar and caramel notes. The core flavors of cedar and caramel really shine in this portion of the cigar.” -Ryan (Youngryan216) 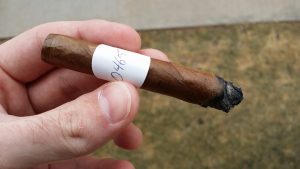 The end of this cigar brings an increase in overall strength and sees some of the more delicate flavors fall away from their former prominence in the blend. This portion of the cigar became a bit hot (pretty normal, in my experience, for this vitola), but was still enjoyable down to the nub. The remaining flavor profile of wood and unroasted peanuts is not the shining example of complexity it was 45 minutes ago, but it was tasty enough to keep me puffing on it till the very end.” -Ryan (Youngryan216)

“The final-third of the cigar has picked up a considerable amount of strength, but is still quite enjoyable. There are woody, grassy, and pepper notes that sit heavy on the tongue. The cigar has smoked flawlessly and has been a real pleasure to smoke. It was a really nice cigar overall.” -Jeff (ExpendableYouth) 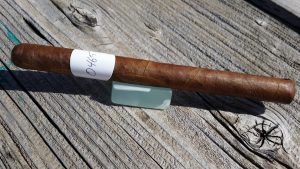 “The draw was just perfect with is great for a cigar this size.” -Wes (SosaCub4Life)

“A very even and slow burn throughout.” -Stefan (Stefan)

“Construction was great. Cigar burned awesome, held a good ash.. it just got a bit mushy at the very very end.” -Wes (SosaCub4Life)

“I never thought there was so much complexity that could be found in a lancero vitola.” -Stefan (Stefan)

“All in all it was good. Probably not my favorite flavor wise but good none the less. I think the 1st third was my favorite when it surprised me after the blandness in the beginning then rapidly changing.” -Robert (NavyPiper)

“I really liked this cigar. My only complaints were the somewhat muddy flavors of the final third and the stick’s overall average smoke production. The flavors of this smoke were very well-blended and played off of one another really well. I really liked the sweetness in the flavor profile because it was never cloying or ordinary — always buttressed by cedar and toast. The performance of this lancero was surprisingly stellar. With a medium strength and perfectly complex body, this stick would pair well with a sweet tea after lunch, or, because of the cigar’s slightly-sweet profile, a fresh vanilla milkshake.” -Ryan (Youngryan216)

“I really enjoyed this smoke. While it was not the most complex smoke it kept my interest the entire time and preformed flawlessly. I would pick up a fiver to keep on hand.” -Jeff (ExpendableYouth)

“Overall I really enjoyed this cigar. It had some nice spice to it which I really enjoy. It burned amazing and was just made extremely well. I look forward to seeing what this was so I can get some!” -Wes (SosaCub4Life)