At the IPCPR trade show last year, Don Lucas Cigars showed off two new blends, The Family Reserve in two different blends, natural and maduro. Today we are looking at the Don Lucas | Family Reserve Maduro. Just like with the Natural version, the Don Lucas Family Reserve Maduro is being sold exclusively in a 5 1/2 x 54 Robusto Extra vitola packaged in boxes of 10, with only 500 boxes produced and each cigar retailing for $16.70. Blend-wise, the cigar is composed of a Mexican San Andrés wrapper, a Dominican binder and filler tobaccos from the Dominican Republic. In 1992, Don Lucas Cigars started rolling cigars with two cigar rollers, and making only 150 cigars per day. Today, they have over 45 employees in their production line. From the beginning Don Lucas has always ensured to keep “quality over quantity”.

They produce a limited amount of cigars with the highest standards of quality in the market. Don Lucas Cigars has catered to the cigar needs of visiting tourists from countries all over the world. Rather than simply producing a serviceable cigar that their visitors can take as a souvenir, the cigars from the Don Lucas factory are a real treat that their customers would love to smoke again and again.

“Appeared nice with a slightly oily, milk chocolate brown wrapper. Seams were visible, as were some medium sized veins. It had a uniform firmless down the length and a small 2mm hole in the wrapper around the end of the 2nd third.” –Isaac M. (The Nothing)

“The main aroma on the wrapper is a deep spicy compost. The foot is milder, but has more of a sweet coffee note that really offsets the compost of the wrapper.” –Jason H. (Jokey Smurf) 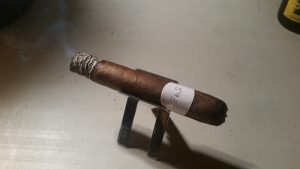 “Nice start to this cigar. I’m getting lots of wood, spice, leather and tobacco flavors right out the gate.” –Mickey T. (irratebass)

“The first puffs were surprisingly savory and heavily oily. I got a real mouthful of heavy smoke, surprising considering these initial draws are a bit tight. The main flavors are lightly charred oak and a woodsy leather. I think the main flavor is the leather, but there is just a bit of a twang of cedar that reminds me of being on a cedar grove. There is also a fair bit of beeper through the nose and on my tongue. I’d call this a solid medium strength cigar out of the gate.” –Jason H. (Jokey Smurf) 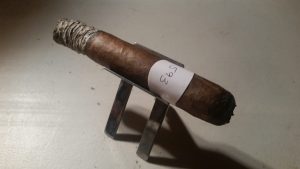 “Dark chocolate and coffee come in on the second. Those flavors came along with the same sweet earth and kitchen spices that were in the first third. Oak and spice were still prevalent on the retrohale. Part way into the second third, the wrapper split at hole previously noted. The split ran the remaining part of the second third and all the way up and under the band. Kitchen spices increased as the second continued.” –Isaac M. (The Nothing)

“Draw loosened up as we got further in. Still getting a little espresso but some sweetness really comes forward. Still getting that salty taste on teh finish with some nice cedar on the retro.” –Zane G. (Zane)

“There was a bitter build up at the head as the first third started up, so I took another cut at the head to freshen things up. First third starts with dark earth, oak and kitchen spices. The burn started to become wavy, I don’t think, though, that it came from the split in the wrapper. I found the cigar got more bitter and there was a build up of burnt coffee and dark chocolate flavors. Spices had pretty much faded out completely. It didn’t seem the cigar wanted to keep going in the last third and it was bitter and became muddy.” –Isaac M. (The Nothing)

“The final portion of this cigar began to build into a delightfully full bodied crescendo…deep rich espresso joined the leather and a bit of spice emerged as well. Not pepper, but more of a cinnamon note that was full flavored and rich. The retrohale remained slightly peppery but not enough to be unpleasant in any way. What a great, eventful end to a long day.” –Jason H. (Jokey Smurf)

“This cigar was packed full of tobacco and maybe a bit tightly at that . The draw on mine was on the firm side.” –Gregg (McGreggor57)

“This cigar had good looks to it, but I’d argue that it was over filled. The whole in the wrapper was small and I hadn’t expected to see anything come of it.” –Isaac M. (The Nothing)

“I really enjoyed the cigar before it fell apart. I got leather, wood, spice and plenty of tobacco flavors.” –Mickey T. (irratebass)

“This cigar started off great, it’s just unfortunate that the last half of the cigar didn’t live up to the first. It began with a great savory sweetness that I found quite delightful, but finished a bitter, muddy mess.” –Isaac M. (The Nothing)

“This was just a beautiful cigar to look at and even hold in my hand. Looks alone this cigar would be killer. Unfortunately I had some draw issues on this one. Normally I would have taken the draw poker to it but since it was a review I wanted to smoke it as is. I did enjoy the flavors I got throughout they were just very muted and in the end became bitter. I would love to try this cigar again and hope for better construction.” –Zane G. (Zane)

“Well, I’ve found it…the cigar that could easily be an every day bit of enjoyment. The flavors were right where I like them, and the performance superb. I’m not certain a new smoker would be ready for the moderately full nature of this cigar, but anyone with a bit of nicotine stamina should find this extremely enjoyable. Time to start saving up for a box of these!” –Jason H. (Jokey Smurf)

“A nice cigar for those times when you don’t want to pick through the flavor offerings and nuances of a cigar. Sitting here for nearly an hour and a half, however, I found it quite one dimensional and had trouble staying engaged. Good flavors, just not very interesting.” –Gregg (McGreggor57)