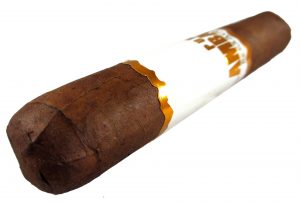 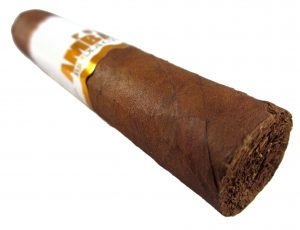 Milk chocolate brown, with a very slight sheen and is uniform in color with no blemishes detected. Size is 4 5/8″ X 55. Head is flat and pretty smooth. Cap isn’t centered, but it covers the entire head OK. There is a big vein under the wrapper that starts just under the cap and runs down the stogie about 2″. There are a few other veins, but are not an issue. Seams are tight and well blended, except for that spot near the head where it crosses that vein and has a slight wrinkle. Overall, it’s nice looking, feels super heavy and weighs a ton!” –Robert (NavyPiper)

“The length of the cigar has a very nice fresh cut grass aroma coming from it. A slight pepper forms at the foot, but is not very strong and rounds out a pleasant overall aroma.” –Steve (ThaGreatWazoo) 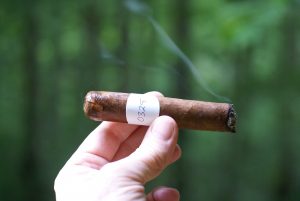 “The beginning has a very mild to medium strength and is coupled with a nice dry grass and smooth leather flavor profile. The retrohale is very mild, but seems to lack depth or any added insight to the profile of the cigar. Throughout the third, the dry grass and leather balance well and have my palate intrigued.” –Steve (ThaGreatWazoo)

“First third started off with flavors of leather, wood and spice. There’s a tiny bit of heat from the spice. Draw is a bit snug but doable. Ash lasted the entire third before dropping. Burn was a wee bit wavy but smoothed itself out.” –Robert (NavyPiper) 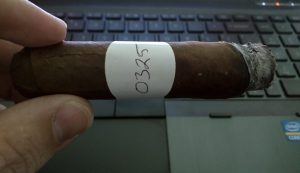 “The entirety of the second third continues with the same profile of dry grass and leather. The leather begins to slightly take the forefront. A nice buildup of flavors has occurred on the tongue and has a slight creaminess factor to it. The retrohale has picked up in strength and still does not lead to any addition to the complexity.” –Steve (ThaGreatWazoo)

“The cigar continues to smoke very well producing tons of smoke. It has become more thick and creamy and coats the palate. There is still a nice amount of spice and the thicker creamy smoke allows the spices to linger.” –Wes (SosaCub4Life) 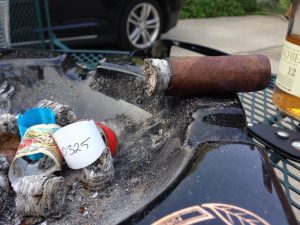 “Finishes much like it started, with peppery wood tasting tobacco leading the way, providing strength and a little harshness to the cigar. The saving grace was the ability of the coffee and light leather flavors to hang around at the very end to keep things on an even keel.” –Ron (shuckins)

“Thank the heavens that the bitterness at the cap had completely disappeared! The graphite flavors shifted more toward a moss-like flavor with a modicum of almond notes. This was the most palatable section of the cigar, but still did not have the most agreeable flavors.” –Kent (Throck)

“The burn has been very good, just off a bit, but overall, very good throughout the entire smoke.” –Wes (SosaCub4Life)

“This was the best part of the cigar: the construction. It was ever-so-pliable and did not crack or come undone in any way during my smoke. It was a beautiful specimen from start to finish.” –Kent (Throck)

“Overall, the cigar was very good. I wish that it had a little more complexity, but the initial aromas and the flavor profile were well balanced, but too inconsistent. A little rest and the right amount of time to let the chemicals release and I believe this will be a very good mild to medium smoke for many to enjoy.” –Steve (ThaGreatWazoo)

“Kind of a one dimensional cigar, which was a shame, as I believe the potential for more was there. I’m gonna put this one on my wait and see list.” –Ron (shuckins)

“I could not get over the initial bitterness that persisted throughout the first two thirds. Although some may enjoy the bitterness, I found it quite off-putting and caused me to lose the subtleties that may have been in the background. Those that I was able to detect towards the end were not complementary and not all that pleasant. I was actually happy that I did not have to continue smoking this cigar once it terminated.” –Kent (Throck)

“Overall, I enjoyed it. Especially liked the spice and the heat it produced. By the final third, it was nice and hot on the palate, lips and left a real good ‘zing’ through the sinuses. This is one I can see having a home with me.” –Robert (NavyPiper)

“Overall, it was a very nice cigar. Lots of spice all the way through that also became creamy with a bit of char along the way. The cigar burned well and produced lots of smoke throughout.” –Wes (SosaCub4Life)
–

Tips and Tricks: Developing Your Palate for Cigars