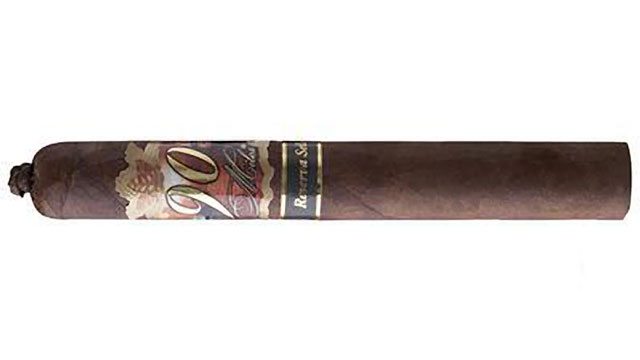 “I like the look of this cigar with its rustic wrapper and nice pig tail. The dark wrapper does have prominent veins but does not look lumpy or uneven.” –Jason (bigslowrock)

“Definitely sweeter notes are prominent with baking spices like nutmeg and cinnamon. Also, there is a background of some coffee and leather. The dry puff again is quite sweet with some nutmeg and chocolate. There is also some honey like aftertaste.” –Sandeep (Djangos)

“Even pack throughout. A little give to it when squeezed. No hard or soft spots. Wrapper work is beautiful (seams and pigtail cap).” –Brian (B-daddy)

“First third starts off with some pepper that is mostly right on the tongue and some leather and tobacco flavors. The sweeter flavors are surprisingly absent. The pepper builds up as the third progresses. The smoke is quite thick and creamy in character and the burn is very straight as well. The draw is also very good.” –Sandeep (Djangos)

“Wow, big smoke and big flavor. Primarily leather and cedar on the draw with a bit of sweetness and campfire on the finish. I’m out on my deck (open air) and I’m literally sitting in a cloud of smoke. Huge volume and it leaves a pleasant oily residue on my lips. I’m really liking this. Retrohale has a little soft spice to it that lingers for a while in my nose.” –Brian (B-daddy)

“In the second third, I’m still getting leather and wood flavors on the draw but they’ve gotten deep and earthy. There’s no spice now to speak of and I’m getting a little bittersweet chocolate and black coffee on the finish. Just at the end of this third, the flavors take on a little bit of stale/bitter flavor.” –Brian (B-daddy)

“Really liked this third. It started off with the same flavors as the first third, but then transitioned. The sourness has almost completely faded. I’m getting some nice roasted nuts, which I’m tagging as being close to hazelnuts. Also, getting some light cocoa and wood.” –Jason (bigslowrock)

“Lots of leather and coffee flavor that blends well together to create a nice creamy sensation. There’s just enough spice to give the cedary tasting tobacco a pleasant zing as it nears the nub.” –Ron (shuckins)

“Remains similar in profile, with dry wood and coffee beans. A nice red pepper spice has appeared and is a pleasant addition.” –Derek (StogieNinja)

“A little wavy at times, but no touch ups needed.” –Ron (shuckins)

“I like the flavors that the cigar delivered, but there seems to be some construction issues with mine. If I saw my cigar was the odd ball of the bunch or this was a value cigar, I would certainly revisit this cigar in the future.” –Jason (bigslowrock)

“This one was a bit frustrating because of its unrealized potential. I don’t know if it was cheap tobacco or just a good cigar that was off, but it needed… more. The flavor was pleasant, but underwhelming. With a little more body this cigar could really shine. Unfortunately, as it is, it’s good, but not good enough.” –Derek (StogieNinja)

“The first third of this cigar was one of the best thirds I’ve smoked for a BMP review. The second and final thirds came back to Earth a bit, but overall, this was still a great cigar. Strong performance (burn/draw) throughout as well. I’d definitely smoke it again and recommend it to others.” –Brian (B-daddy)