Last year, General Cigar announced a collaboration with A.J. Fernandez to create the Hoyo La Amistad. These cigars are made at Tabacalera A.J. Fernandez Cigars de Nicaragua and is comprised of a dark, Ecuadoran Habano wrapper and a combination of Nicaraguan tobaccos from Estelí, Condega and Jalapa. It’s a fresh take of Hoyo de Monterrey through the eyes and mind of Fernandez. La Amistad translates to “friendship” in Spanish. Today we are reviewing the Hoyo | La Amistad by AJ Fernandez Robusto.

“It’s really a classic pre-light aroma. Some cedar notes from the wrapper and some peppery notes at the foot. The cold draw is musty, like a barnyard.” –Matthew T. (A Huge Nerd) 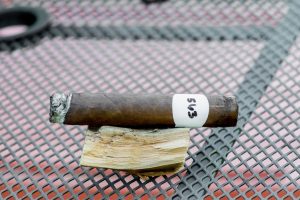 “A nice wood char with a little burnt toast. Some black peppercorn early on provides a little heat before settling into a flavor component. Cedar and cream is developing on the finish adding a layer of sweetness.” –Gregg (McGreggor57)

“This cigar started off great. Lots of nice deep spice and smooth wood lead the way and the flavor profile . The cigar burned very well and the ash was nice, thick, and white. An overall powerhouse of a cigar to begin with. The retrohale was smooth and gave a little extra nic hit from time to time.” –Steve (ThaGreatWazoo)

“More of the cedar and cream is coming forward as the increasing leather tempers the char. Some floral in the background provides a nice dimension to this third. I really appreciate the amount of smoke this cigar is producing.” –Gregg (McGreggor57)

“This middle third really has some great stuff going on. A mix of sweetness and spice that is well balanced. There is still some of the black pepper, but it is very subtle and in the background. The foreground flavors are mixtures of spiced pecans and more toasted cedar. Still that same nice citrus/pepper mix on the retrohale.” –Matthew T. (A Huge Nerd)

“The heat on the cigar towards the final third barely ever made a presence and never affected the smoke. Just all-around good clean finish to what I consider a damn good cigar. I just kept smoking and it just kept providing little nuances that kept my attention.” –Steve (ThaGreatWazoo)

“Ample smoke production and a long holding ash. It was quite windy but the cigar self corrected the burn-line for most of the smoke.” –Gregg (McGreggor57)

“Not only did the cigar look beautiful, but it also performed well. That is a testament to great construction and attention to detail.” –Matthew T. (A Huge Nerd)

“Overall this was a good smoke. I think this would not be a good first cigar of the day, but if you had a full day of smoking this would be a nice 2nd or 3rd stick of the day. Just beware it does pick up the spice in the final 1/3rd and through the whole 2nd third, but becomes a nice pleasant smoke at the end.” –Mickey T. (irratebass)

“This one truly offered distinct transitions between the thirds. From a woodsy char with a little spice, to cedar, cream and floral while ending on a softer cedar and baking spice note. The balance of flavors developed quickly and remained throughout the smoke. I would definitely light up another one.” –Gregg (McGreggor57)

“The only part to the cigar and that I did not enjoy was when it was done. From beginning to end this cigar offered good flavor and complexity which kept me intrigued and in tune during the entire smoking experience. A bit on the strong side after it was done, but nothing a seasoned smoker couldn’t handle. Please enjoy one of these cigars with your favorite cocktail because it will give you everything that it has and then some. Whatever you do, do not miss out on trying one of these.” –Steve (ThaGreatWazoo)

“While it wasn’t the most complex cigar, it was consistent and flavorful. Put that in the same package with a great burn and big smoke output, and that makes for a cigar that I want to smoke again. No question that I would be happy having these in my humidor.” –Matthew T. (A Huge Nerd)

Blind Cigar Review: Hoyo | La Amistad by AJ Fernandez Robusto
Summary
"Overall this was a good smoke. I think this would not be a good first cigar of the day, but if you had a full day of smoking this would be a nice 2nd or 3rd stick of the day. Just beware it does pick up the spice in the final 1/3rd and through the whole 2nd third, but becomes a nice pleasant smoke at the end." -Mickey T. (irratebass)
Appearance
92
Aroma
89
First Third
90
Second Third
92
Final Third
88
Draw
95
Burn
89
Construction
92
Overall Experience
92
91
Overall Score - Very Good