At the 2015 IPCPR in New Orleans, Robert Wright announced a third and fourth release within the Pura Soul portfolio, a barber pole, and Maduro. Both blends are from Honduras and use tobacco from the Jamastran Valley region produced by the Eiroa family.

These cigars are crafted at Fabricas Unidas, the same factory that rolls Asylum , CLE, and Edgar Hoill for a man named Robert Wright, a musician of over 40 years. His goal was to make a cigar as rich and complex as any renowned symphony.

“This is a sexy cigar. The dark brown, matte wrapper has a slight oil sheen and invisible seams. The cigar is corona-sized and has a slight box-press. I can’t wait to light this up honestly.” –Ryan (Youngryan216) 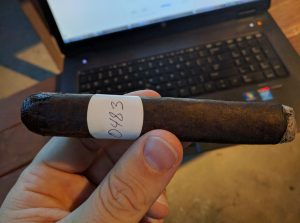 “Notes of raw wood backed by strong green leaf tannins that are balanced by a touch of vanilla wood.” –Stefan (Stefan)

“The cigar starts off with some leathery notes along with some char and wood. The complexity is immediately evident along with thick smoke production and big toasty cookout flavors. The spice is restrained and balanced with a bittersweet cocoa dryness that makes for an interesting blend. The finish is smoky and refined like a seared piece of meat.” –Ryan (Youngryan216) 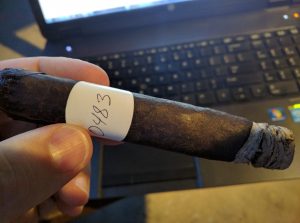 “The second third is more intense, and yet remarkably smooth (initially it reminded me of a Padron 1964 Natural). At first there is a slight addition of nuttiness as well as more pronounced hints of white pepper, particularly on the medium-long finish. Around the midpoint the finish shifts to unsweetened cocoa flavors, becoming quite long. Past the midpoint mushroom flavors become prominent on the palate for a short while, soon overtaken by flavors of cocoa powder as black pepper notes make an appearance on the finish.” –Stefan (Stefan)

“While the strength has picked up a bit in this third, the spice has remained consistent. The bittersweet cocoa taste refuses to turn sweet and the smoky / roasty notes of charred meat remain, but something is missing. There is a juiciness that the blend lacks that would really push it over the top. However, some mineral notes come forward toward the end of this third, adding to the overall depth and complexity of this blend.” –Ryan (Youngryan216) 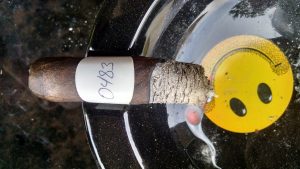 “The final third is surprisingly spicy, marked by notes of white and red pepper on the palate and retrohale, and black pepper and cocoa on the backpalate and finish.” –Stefan (Stefan)

“The cigar continues to produce tons of smoke. The spice has stayed rather strong throughout the rest of the cigar. There is a slight sweetness to the cigar that is barely there through the spice.” –Wes (SosaCub4Life) 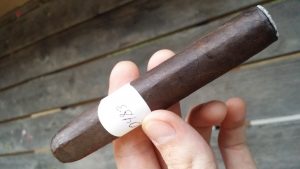 “Draw seemed to be a bit anemic at first, and then it became very good beginning with the second third.” –Stefan (Stefan)

“There were no touch ups and I only ashed once. The burn was razor straight until the final third where it picked up a slight wobble.” –Ryan (Youngryan216) 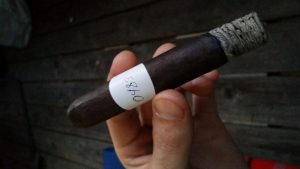 “Again another very enjoyable smoke. The flavors were a nice balance and never tried to out do the others. The woodsy and roasted nut flavors were a nice balance complemented by the peppery taste. I most enjoyed the wonderful sweet after taste. It never left a sour taste as I neared the end. That was the clincher for me. I smoked this cigar as far as I could, which is rare because of the nice after flavors and would very much enjoy this cigar again. As for what drink I would pair it with I am at a loss, maybe I can get this one again and look at pairings.” –Eric (smalls29)

“Irrespective of the hefty, rustic-looking wrapper, this one’s a terribly smooth smoke. A great example of why one can’t assess a smoke from the wrapper, the same way a book can’t be judged by its cover.” –Stefan (Stefan)

“With all the different things going on in this blend, there is a unity that is achieved here that is rare in cigar blending. While I was not blown away by this cigar, I was satisfied with the expectations I had based on its stellar appearance. I normally go for really chocolatey, rich cigars. And this was definitely rich in flavor, just in different ways than I am used to. I know it sounds ridiculous to describe a cigar as “smoky” but the flavors taste like they were fresh off the grill. There were also no real touch-ups to speak of. I would definitely smoke this again. Age and a good stout would both be great for this stick.” –Ryan (Youngryan216)

“The cigar started off a bit too mild for my liking but as the smoke went on the spice kept picking up. By the 2nd third on the cigar was mostly a strong spice, more of a spicy chili than pepper. There was just a hint of sweetness throughout but not much. The cigar did get hot and I could not burn it all the way to the nub.” –Wes (SosaCub4Life)

Hand Rolled: A Film About Cigars to Be Made Public for Free via YouTube – Cigar News