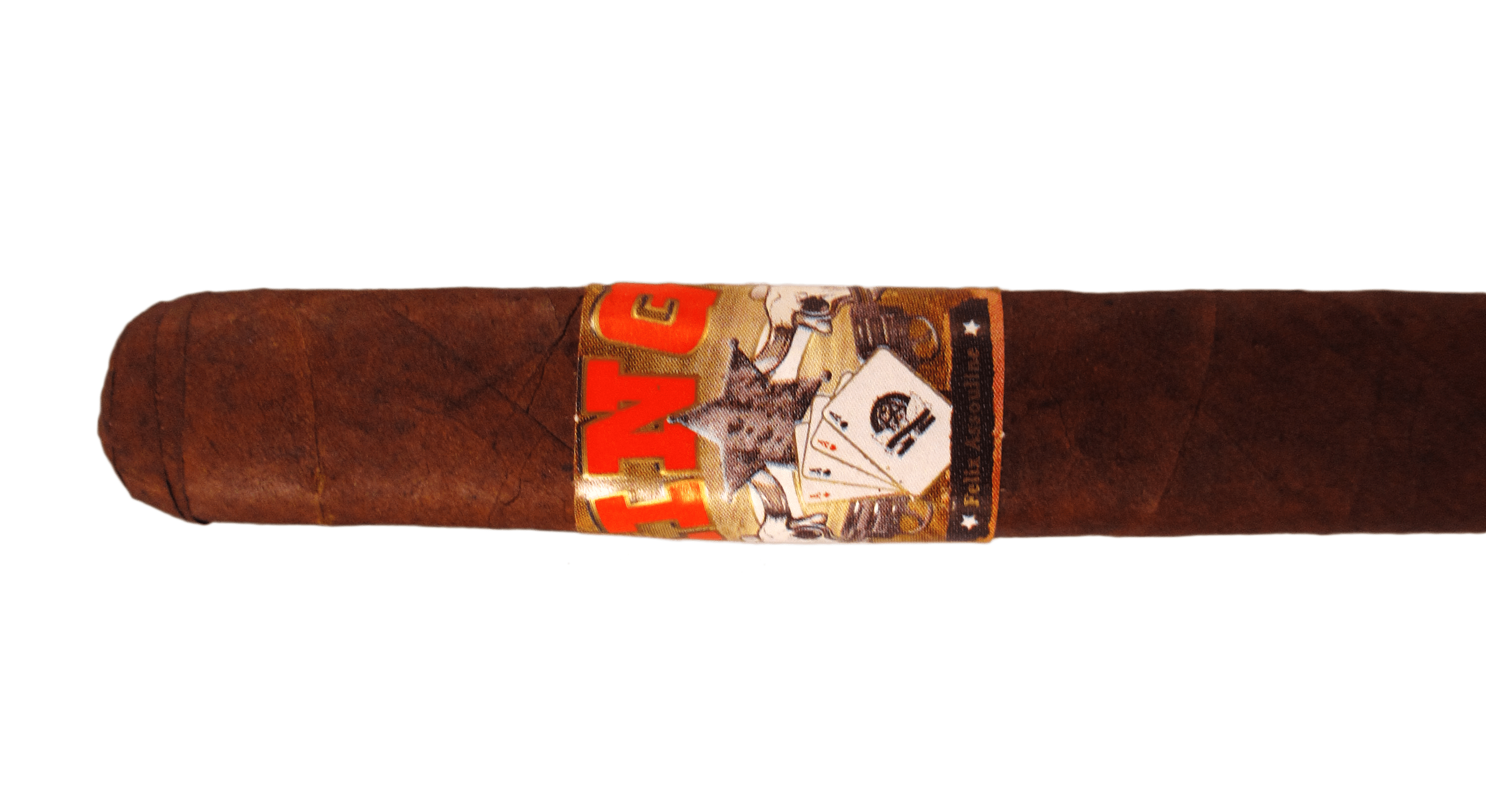 “Good looking cigar with a nice dark wrapper that has an oily sheen to it.” –Ron (shuckins)

“From the foot, an earthy, dark tobacco flavor was given.” –Cindy (Ms_CindyLynn)

“Again, looks like it was made by a master. Very straight, firm with the right amount of give, great job on the seams, wrapper and cap!” –Robert (NavyPiper)

“Earthy flavors predominate the initial puffs and surprisingly the leather and chocolate are absent. The woodsy flavor of cedar and sawdust are more prominent. There is definitely some pepper to the back of the throat. The more earthy flavors like hay and grass are in the forefront. The burn is almost perfect with a straight line. The draw is excellent with volumes of creamy grey smoke with each puff. The ash is darker grey and is holding for about an inch before falling off. The couple of inches in the first third did not offer much change in flavors than already mentioned.” –Sandeep (Djangos)

“No pepper up front to speak of, but it does start to creep in after about a half inch. This pepper added what it was missing up to this point. I’m getting a background of earth and wood in this first third, not too complex but it’s very enjoyable. About halfway through the smoke volume picks up suddenly and so does the flavor, more intense. Along with the intensity comes a unique raisin flavor. All in all, a very nice third.” –Emmett (rhetorik)

“The second third continues with the sagebrush as the dominant flavor, but now there is a woodiness with the pepper. Again, great blending of flavors, balancing well together and very, very enjoyable.” –Robert (NavyPiper)

“I had a bit of a hard time enjoying this next third. There was a small tunnel developing as I was going into the second third, but I easily fixed and recovered from it. The taste was earthy with the wood notes from the first third, as there was a slight bitterness appearing in the profile. A few puffs later, the flavors turned into a gritty, dry smoke.” –Cindy (Ms_CindyLynn)

“I seemed to have burned past whatever kind of plug was giving me problems and the cigar opens back up again nicely. There’s a little more kick to it now and I’m getting some leather mixed in with the underlying raisin and earthy flavors. The cigar has really found it’s way now and is very enjoyable. Towards the end, I’m getting a lot of nuanced flavors both new, and from previous thirds in a nice little leather, oak, earth and raisin medley. Very nice.” –Emmett (rhetorik)

“Going into the last third, there was a mild sweet, allspice flavor. This was the most enjoyable flavor through it all. This mix continued until halfway through the last third. After that point, all the flavors that I tasted throughout this cigar presented itself all at once, with the grittiness aspect toned down a ton!” –Cindy (Ms_CindyLynn)

“The draw was a little tight at times, but produced lots of smoke.” –Ron (shuckins)

“The burn for the most part was very good, apart from the second third when it tried to go out on me.” –Emmett (rhetorik)

“Overall, I loved this! From its appearance, construction, to the flavors, I loved each and every moment with this cigar. Hated to see it go! I’d take a box or 2, or 3 in a heartbeat!” –Robert (NavyPiper)

“The cigar was for the most part very unilateral and ordinary but pleasant nonetheless. The last inch brought so much flavor that I was left wanting that for the rest of the cigar. The ‘twang’ like flavor was also refreshing but definitely did not make or break this one. Definitely in to try another time.” –Sandeep (Djangos)

“The cigar started off good, but went downhill pretty quick. The flavors were not very enjoyable to me, and if I wasn’t smoking it for the review, I would have tossed it after the halfway point.” –Ron (shuckins)

“Overall this was a really, really good smoke. The flavors were great and changed enough throughout to keep it interesting. The only problem I had was in the second third when it tried to go out on me, but I’m willing to chalk that up to a fluke or needed just a little more rest time because the rest of the cigar was excellent. I would definitely seek these out, a 5er at least, and box if the price is right. I think the body and complexity is right in the range where anyone could enjoy.” –Emmett (rhetorik)

“Overall, this was a good smoke. If I could have eliminated what I experienced during the second third, I would have rated it higher. The earthy, dark tobacco with notes of wood and sweet spice was enjoyable. The construction and burn was on point for the most part. Would I smoke this again? Yes, my hope is that the grittiness isn’t a normal part of the profile.” –Cindy (Ms_CindyLynn)