CAO Consigliere is a sequel or remake or sorts of the CAO Sopranos Cigar– the five-country blend is the same as before. Consigliere is handmade in Nicaragua, with a Brazilian Mata Fina wrapper, bound with a Honduran leaf and features a blend of Nicaraguan, Dominican and Colombian leaves. This is a bold cigar with flavors of espresso, wood and spice.

Consigliere will be pulled back in as a full-time member of the CAO family starting in October, with suggested retail prices that are less than the original. Three new sizes were created for the launch. They are: Associate — 5 x 52; SRP per cigar is $6.99 Soldier — 6 x 54; SRP per cigar is $7.99 Boss — 7 x 56 Torpedo; SRP per cigar is $8.99

“This robusto sized cigar is sporting a chocolate brown wrapper leaf that looks somewhat oily and has minimal veins. The seams are easily visible, particularly on the cap, however they are tight and smooth.” –Jason H. (Jokey Smurf)

“There is a nice sweet, barnyard smell coming from the wrapper. An inviting aroma that makes you anticipate the first inhale.” –Eric (smalls29) 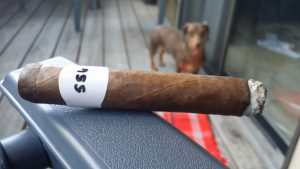 “First third starts off with a nice cream & leather mix along with hints of coffee, chocolate, and just a hint of cinnamon . Not much spice, but I feel it’s in there somewhere. The retro has that nice Nicaraguan “twang” that I like, watch it be Dominican or something other than Nicaraguan and I’ll look like an asshat. Ash fell off about an inch in, and i’m now at that part where the wrapper was coming off. The burn is now uneven, but still smoking fine….gonna see how long I can go before having to touch it up.” –Mickey T. (irratebass)

“Wow. This got off to an unexpectedly delicious start. The first few puffs are crisp and short on the finish. There is a subtle sweetness, like a light, alfalfa honey. The sweetness is not cloying, and has a counterbalance of fresh, Italian bread. The flavors are incredibly smooth and balanced with no real spice to speak of. I feel like this is going to be a nubber for sure.” –Ryan (Youngryan216) 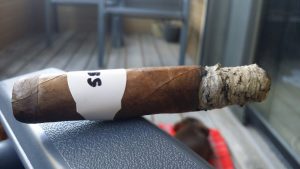 “And there’s the spice, along with some hazel nut on my lips & tongue. Strength surprisingly has dropped to a medium, and the spice is now gone, while the cream is front & center…nice transition.” –Mickey T. (irratebass)

“This cigar is maintaining a nice balance of coffee and spice. Fall flavors to me. The coffee is the main star with the spices doing nice job in support. I am beginning to notice the presence of a peppery tingle. Not a dominate one but noticeable and enjoyable. The cigar is burning well but I just wish the draw wasn’t so tight.” –Eric (smalls29) 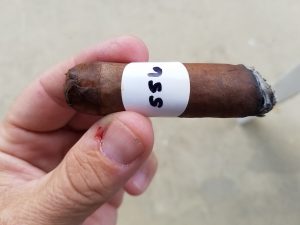 “Once again another transition with the chocolate coming back in the front. The strength and body stayed consistent at medium. I Had to set it down about the 1 inch mark got a little too hot for me,.” –Mickey T. (irratebass)

“Without becoming harsh or sour, this blend stayed cool to the nub. “Nubbing” a cigar is rare for me, but I simply could not put this down. It was very buttery and the flavors stayed true and balanced to the very end.” –Ryan (Youngryan216)

“This cigar had just the right amount of resistance in the draw….slightly firm, with enough air flow to easily control the burn and give heavy smoke.” –Jason H. (Jokey Smurf)

“This one burned very nice. Not quite evenly but I was able to maintain a good ash until the half way point.” –Eric (smalls29)

“The performance of this cigar was exemplary but the rough cap made me reduce the construction score just a bit. Over all the cigar looked nice, and performed well…I’m probably being overly picky regarding the cap, but I’ve certainly seen better workmanship in that area.” –Jason H. (Jokey Smurf)

“Very good cigar. Had some really nice transitions with the spice coming in at the beginning the 2nd then the cream front and center during the end of the 2nd and beginning of the 3rd. The chocolate & cinnamon that slithered in was a nice touch.” –Mickey T. (irratebass)

“The performance was truly the bright spot in this cigar…that, and the final third. In most cases I would not have finished a cigar that started off as this one did…I’m glad I did finish it, in this case, because I was exposed to the sourdough note that I really enjoyed. Based upon my review alone, I would not chose to smoke another of these…If my review is atypical, however, I’d be open to giving it another shot.” –Jason H. (Jokey Smurf)

“I was ready to give this one a great, maybe excellent overall experience. But the sour and bitter tastes in the final third ruined it in my opinion. The first and second thirds were wonderful. Coffee and spice on a fall day were beyond wonderful. It would pair nicely with a good cup of coffee on a fall morning. However, the final third went south on me. I was ready to give up but I do not like ending a cigar early and the aroma was very pleasing and enjoyable. If this one would maintain the flavors throughout it would have made for an awesome experience.” –Eric (smalls29)

“Why can’t this be like 3 feet long? I would have gladly smoked a churchill vitola of this blend. It was just so well balanced and smooth. Seriously, I can’t remember a time I have ever tasted iced tea notes so clearly in a cigar. But it was bready and sweet at the same time. Also, something unique; something I cannot put my finger on, is happening here: maybe Cameroon or Agonorsa? Whatever it is, it was the best smoke I have had the pleasure of roasting this fall. This is a box purchase for me. A truly great after-lunch smoke, or something that won’t burn out your palate before dinner.” –Ryan (Youngryan216)