The D’Crossier Golden Blend from Pure Aroma Cigars Inc. is aged 7 years. The name D’Crossier comes from the surname of the grandfather of the owner, Isaias Santana Diaz. Crossier was a Frenchman who immigrated to Cuba in the 19th century after taking a shine to the beauty of the island and its tobacco. Following the familiar story arc, a young Diaz was inspired by his grandfather’s writings and decided to get into the cigar business. Years later in 2003 he began buying tobacco and in 2006 established his cigar company. 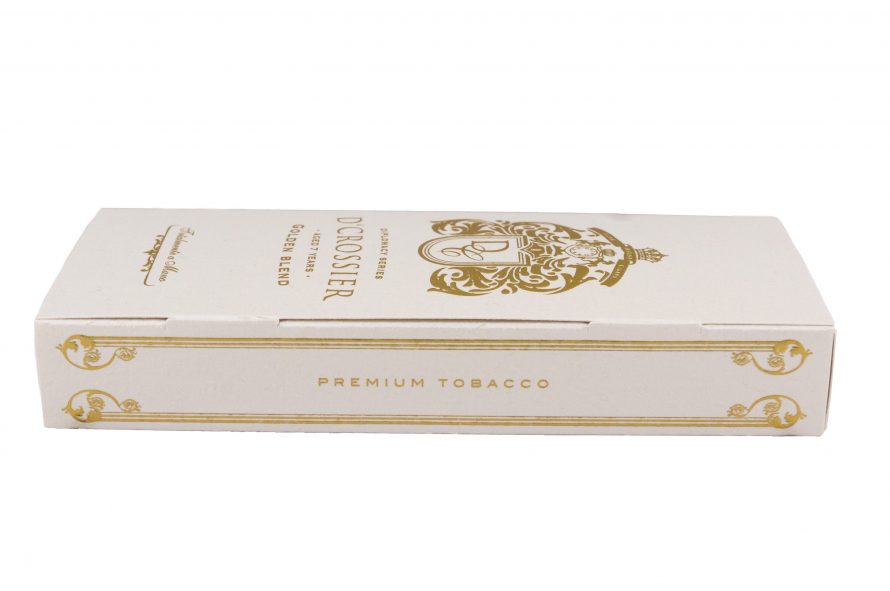 The idea behind the Diplomacy Series is a reference to diplomats and their love for cigars. He sees the cigars as the embodiment of diplomacy. Making them, sharing them and smoking them is about building relationships and making friends. The Golden Blend comes in 5 sizes, torpedo, robusto, D’Corona, churchill and Taino, and varies in price from $8.70 for a robusto to $12 for a Taino. It also features ligero that has been aged for seven years.

“A nice looking cigar with a pigtail cap and a wrapped foot. It also has some nice lines with not too obtrusive veins and seams.” –Eric (smalls29)

“Besides this being a bold cigar, there is a flavor of soil and rum. A strong flavor that reminds me of a strong drink. This one is very different from many of the other cigars I have enjoyed.” –Eric (smalls29)

“Very mild start on this cigar. Little to no spice coming through the retrohale. Decent earthy / bread flavors coming through but it seems hard to pick up a lot o flavor so far. Kinda bland. 8^(” –David F. (David F.)

“Starting out with the cigar completely going out, flavors remain the same for me… coffee, earth, and spiciness. No transitions have happened yet. After another inch of ash the cigar goes out yet again.” –John A. (John A.)

“As I take in the smoke I am reminded of the smell of fireworks on the fourth of July. That smell of gunpowder. The flavor on the other hand is a bold, dark flavor with a strong taste of either rum or American whiskey. I can’t decide.” –Eric (smalls29)

“No changes detected between the second and final thirds in flavor or in strength.” –Dave W. (mdwest)

“The draw is a bit on the loose side, but not bad overall. Its manageable.” –Dave W. (mdwest)

“Had alot of burn problems with the cigar it required one correction and burned funny for the remander of the smoke” –Ryan H. (Ryan H.)

“The cigar grew soft in my hands over time. The wrapper did not burn evenly and caused it to have a very poor chimney” –Eric (smalls29)

“The first third had me hooked but no complexity it was detected flavor wise. The poor burn of this cigar made it even worse as it went out as many as four times. Relights made the flavor profile worse and worse until it was completely on smokable and the final third. Hopefully this was just a dud stick.” –John A. (John A.)

“Just didnt like what the cigar was producing. It was not enjoyable at all. The first third was not bad at all but as the smoke went on it just got worse and worse. I had to stop just before reaching the last third” –Ryan H. (Ryan H.)

“The beginning flavors of rum and/or whiskey were a nice change. It was a very bod cigar and different from what I am used to. The downside was trying to keep the cigar lit. The first third burned fine but as time went on, I had to continually relight until I could no longer keep the cigar lit. Based on this experience this is not one I woujld want in the humidor.” –Eric (smalls29)

“Overall I enjoyed this stick quite a bit. It provided plenty of flavor without a big nicotine kick. I’ll absolutely seek this one out again after the reveal and smoke it again.” –Dave W. (mdwest)

“This cigar started very mild and while I was hoping for some change, it remained mild and pretty flavorless throughout. While the cigar’s appearance, draw, and construction is very good overall, it lacked in flavor and depth. I do not think I would recommend this cigar.” –David F. (David F.)

Blind Cigar Review: D’Crossier | Diplomacy Series Golden Blend Robusto
Summary
"This cigar started very mild and while I was hoping for some change, it remained mild and pretty flavorless throughout. While the cigar's appearance, draw, and construction is very good overall, it lacked in flavor and depth. I do not think I would recommend this cigar." -David F. (David F.)
Appearance
90
Aroma
88
First Third
86
Second Third
84
Final Third
76
Draw
88
Burn
85
Construction
88
Overall Experience
88
84
Overall Score - Fair