If you don’t have the patience to age your own Cuban cigars, Habanos has a program that will do the aging for you. The recent program called Añejados (which translates to “aged”), and according to distributor Habanos S.A., these cigars are aged in Cuba from five to eight years before being release to the public.

The Añejados program started globally last year with two unique sizes—a Montecristo Churchill (7 x 47) and a Romeo y Julieta Pirámide (6 1/8 x 52). Though the Pirámide and Churchill are standard sizes in other Marcas, this Añejado release marks the first time that either brand has been rolled in these vitolas for each major commercial launch.

Ajay Patel, manager of a La Casa del Habano shop in London said, “It’s a good idea overall, but Cuba does not have a lot of these. They’ll only be around while stocks last.”

Despite the the more expensive price, Patel said these cigars have found an audience. “They are selling,” he said. “The guys that have smoked in the lounge enjoyed them. So a good response so far.”

If the Añejados program sounds familiar, it’s because Habanos S.A. started it for Cuba’s domestic market back in 2011. The launch coincided with the celebration of the Casa del Habano’s 15th anniversary, which took place at the Casa del Habano in Havana’s Partagás factory. The cigar that kicked off the program was a Hoyo de Monterrey Hoyo de Dieux with more than 10 years of age. Now that the concept has been exported to the rest of the world, cigar enthusiasts can easily identify Añejados by the conspicuous secondary bands.

The aging process on the Añejados line does not have anything to do with the age of the tobacco leaves or the date of the crop. Instead, the age statement refers to the date the cigar was originally rolled.

“The cigar has a rustic look to it with bumps along its body, some veins and decently applied seam work.” -Ryan (Youngryan216)

“Mild aroma of tobacco and cocoa is the predominant flavor. The dry puff is one of cedar and milk chocolate. There were faint notes of nutmeg and clove as well. Mild and no pepper. Good start.” -Sandeep (Djangos) 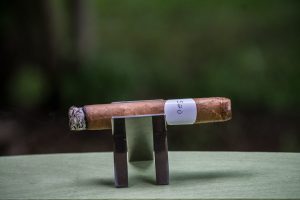 “The flavors on the first third start out with a mild black pepper. As the first few puffs go by, there is a sweetness present that I can’t quite identify. Each puff in the first third has a finish of mild leather.” –Matthew T. (A Huge Nerd)

“This cigar starts out with notes of wood and black pepper. There is an underlying perfume note that is hard to nail down. As the one-inch mark approaches, a butterscotch note adds itself to the blend. This is very smooth so far, but not without a bit of strength.” -Ryan (Youngryan216) 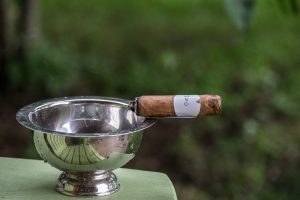 “The middle third starts off with the same hay and grass flavor but now there is more tobacco and cedar. The pepper increases in intensity starting the mid point of the cigar and increases the complexity. There is another kind of spiciness towards the end of the third like nutmeg or cloves. Definitely an improvement over the initial third. The ash holds till the mid point before falling off. The draw has improved and the burn line is still sharp. Definitely better than the initial third.” -Sandeep (Djangos)

“The blend has become a bit peppery, but still has the perfume note that I cannot identify. The butterscotch note from the first third is fading and the pepper takes its place. This is an odd blend in my opinion. The flavors are a bit muddy and leaves me wanting more from it.” -Ryan (Youngryan216) 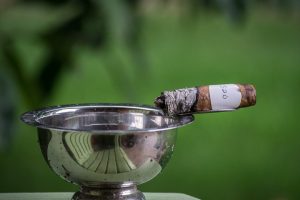 “The char is returning along with more oak and a darker toast. The fading leather creates a void in the flavors and allows a slight bitterness to creep into the mix. It’s not bad, just a little edgy.” -Gregg (McGreggor57)

“The final third takes a slight downturn due to the lack of complexity. The notes stayed floral with hints of cedar and pine. No real uptick in spice. A very clean finish with a little overheat towards the end.” -Steve (ThaGreatWazoo) 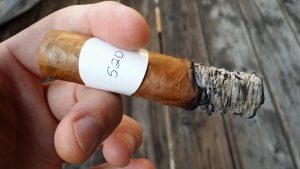 “The draw was tight in the beginning but definitely improved and there were no issues in the middle and final thirds.” -Sandeep (Djangos)

“Lots of smoke with an ash that only dropped at the mid point. A straight burn-line as well.” -Gregg (McGreggor57)

“Well constructed cigar with a firm feel to the entire lenght. No issues with the wrapper unraveling or cracking the entire time.” -Sandeep (Djangos)

“Some robust flavors of charred oak, leather and pepper transitioned nicely to a smooth oak and leather profile. The highlights of toast and mint allowed the palate to rest a bit. The final third, however, became a tad bitter.” -Gregg (McGreggor57)

“This was one of those cigars that makes me glad I take thorough notes while smoking a blind review. It was just not memorable. The blah appearance was not well supported by the flavors present. The overall profile just never came together to a harmony of any kind. Probably not something I would seek out.” –Matthew T. (A Huge Nerd)

“This cigar was good overall. Kind of light for my palete, but was a good change up. Smoke this in the morning with some coffee and you can’t go wrong.” -Steve (ThaGreatWazoo)

“Overall this was a good cigar that started off quite muted but picked up in the middle third and ended with a bang. Maybe some aging will help further with the flavors. Will definitely try again.” -Sandeep (Djangos)

“There was something off about this cigar for me. I didn’t really dig the flavor profile of this smoke at all. I am guessing more fermentation of the tobaccos used would have greatly benefited this smoking experience.” -Ryan (Youngryan216)