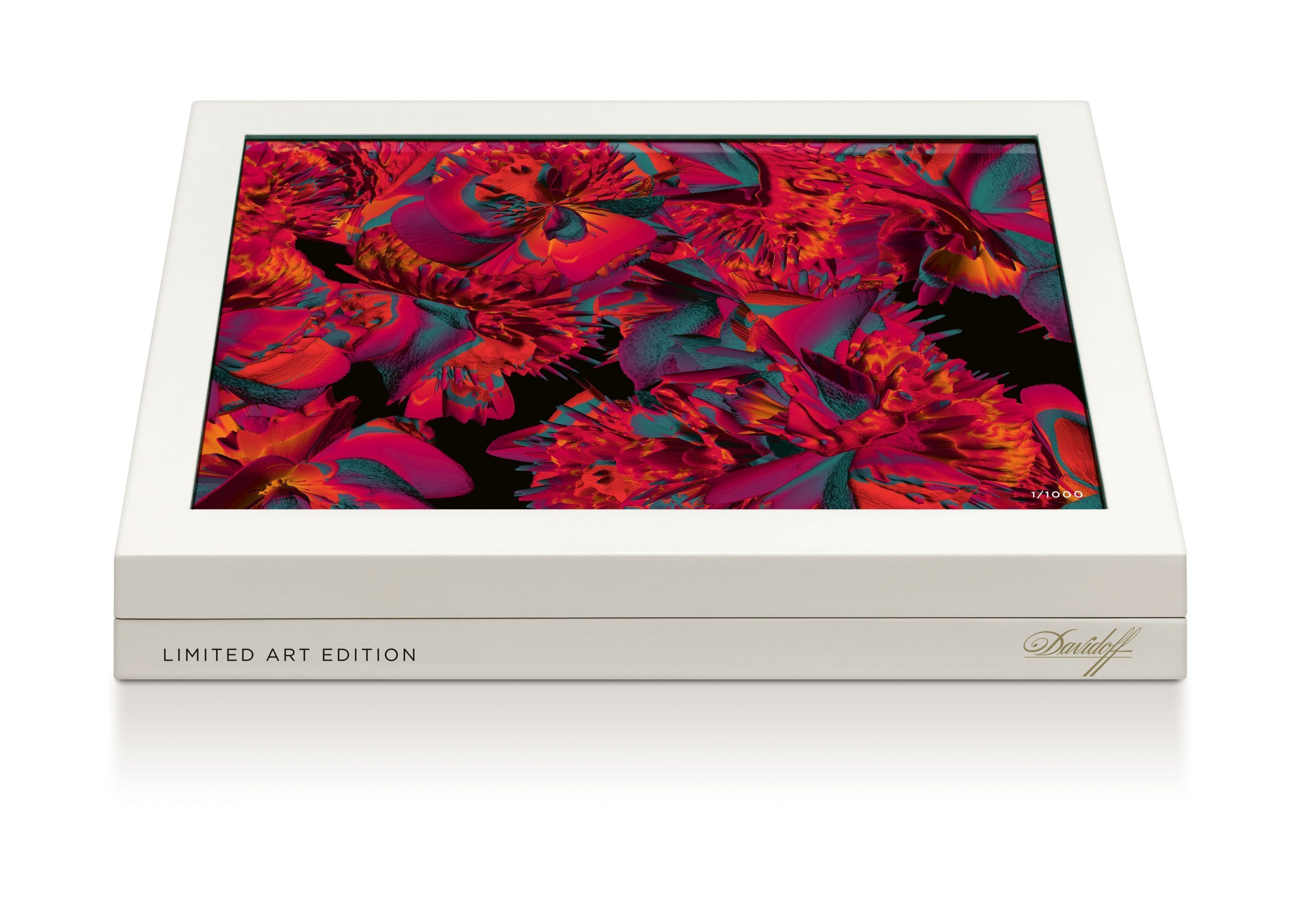 Basel (Switzerland), May 23, 2017. As an Associate Partner of Art Basel for the seventh consecutive year, Davidoff Cigars will proudly unveil the newly commissioned Limited Art Edition, Nature Reimagined by Rodell Warner, at Art Basel in Basel, June 15 – 18, 2017. This new Limited Art Edition comes in high-end cigar boxes, each featuring one of five unique artworks created by the artist. Images as exceptional as the 10 beautiful Limited Edition Davidoff Toro cigars included in each box.

For this third edition, Warner was granted free rein to create an entirely new body of work, highlighting both his strengths as a visual artist and Davidoff’s own commitment to excellence in its handcrafted, luxury products.

“We quickly learned that what we wanted to discover and communicate is what connects the cigars and the art,” Warner noted. “What goes into the production is what we care about; with both the cigars and the images. We realized that we are designing experiences that are sought out for the pleasure they give, and that we take pleasure in giving only our best.”

Considering the care given to Davidoff’s cigar production, from the highest quality tobacco grown in fertile
soil, to its curing process and method of rolling and enjoying, Warner said the five images for his edition
should likewise embrace this richness. He thus developed abstractions of the natural elements and
processes inherent in Davidoff cigars. “They are nurtured and crafted to create a visual experience full of
texture and surprise,” he said about his works. “They are impressions made in the spirit of the products
they represent.”

The Davidoff Limited Art Edition 2017 is inspired by photographs of the Caribbean islands. Rodell Warner
created a collage of patterns and turned it into a digital three-dimensional object. He then saved images of
the digital 3D object viewed from various angles and used these images like puzzle pieces to build the final
artwork. Five of his exclusive creations using this new and exciting technique will be released—1,000
numbered boxes for each design—and will be featured on the lid of the Davidoff Limited Art Edition 2017
boxes.

The Limited Art Edition 2017 comes in high-end white lacquered boxes featuring a removable magnetic lid
that collectors can use as a frame to display the exclusive artwork. Each box will carry ten exceptional
Davidoff Toro cigars.
About the Cigars

This beautiful and complex cigar is creamy, spicy (Cubra tobacco) and sweet (Matafina tobacco) with
constantly-changing flavours of wood, ginger and leather. One of the highest ratings ever achieved in
internal tasting panels demonstrates that it is true art for the palate, leaving an unforgettable impression.

Warner will create a special series of photographs by projecting the Limited Art Edition images onto
subjects, a further maturation from his earlier series First Light and Negatives, which both involved
photographs projected onto subjects in increasing degrees of experimentation. The special Collector’s
Edition will consist of the Limited Art Edition 2017 cigar box and one photograph signed by the artist from
the series, as well as the Davidoff Book Collection.

The Davidoff Lounge at Art Basel is designed by the renowned Swiss firm of Atelier Oï. It will showcase the
artists and activities of the Davidoff Art Initiative and serve as a place to give expression to Oettinger
Davidoff’s core values: the company’s respect for the natural environment, its support for the time-honored
techniques of premium tobacco cultivation and cigar production, and its embrace of the cultural heritage
and contemporary artistic vibrancy of the Caribbean region. As a result, the lounge will convey a feeling of
warmth, luxury, and authenticity associated with the Caribbean and reflected in Davidoff’s motto, Time
Beautifully Filled.

The Limited Art Edition and a selection of artworks from Warner form the centerpiece of the Davidoff Lounge
during Art Basel in Basel. Furthermore, Davidoff Art Initiative in collaboration with My Art Guides opens
Basel Meeting Point, an ephemeral venue and event in the heart of the city at Rheinsprung 1, from Monday,
June 12 through Saturday, 17 June from 2pm – 6pm. Conceived as a creative retreat and a forum to
exchange ideas and enjoy discourses, Basel Meeting Point will feature works from the Davidoff Limited Art
Editions artists — Quisqueya Henríquez, Olivia McGilchrist and Rodell Warner alongside a program of talks
and salon presentations.

Rodell Warner (b. 1986, Trinidad & Tobago) is a multimedia artist. He has exhibited in Kingston,
Johannesburg, London, New York, Washington, and Maracaibo. Warner was a recipient of the 2011
Commonwealth Connections International Arts Residency, and he was an artist in residence at Caribbean
Linked II in Aruba in 2013, and at New Local Space (NLS) in Kingston, Jamaica, in 2014.

About the Davidoff Art Initiative

The Davidoff Art Initiative supports contemporary art and artists in the Caribbean, strengthens art
organizations, and fosters cultural engagement between the Caribbean and the rest of the world. It brings
opportunity and visibility to the art and culture of the wider Caribbean region, including the Dominican
Republic, where much of Davidoff’s production and many of the employees are based.
Extending the company’s long-standing commitment to artistry, part of the revenues generated by the
Limited Art Edition 2017 will be dedicated to sustaining the Davidoff Art Initiative and supporting young
emerging artists from the Caribbean. For more information, please visit davidoffartinitiative.com.

Oettinger Davidoff AG with sales of over half a billion Swiss francs and 3,600 employees around the world,
traces its roots back to 1875 and remains family-owned to this day. The company is dedicated to the
business of producing, marketing, distributing and retailing premium-branded cigars, tobacco products and
accessories. The premium-branded cigar business includes Davidoff, AVO, Camacho, Cusano, Griffin’s,
Private Stock, Zino and Zino Platinum. Oettinger Davidoff AG is also the sole agent of many brands in
several countries such as Haribo in Switzerland and S.T. Dupont in the USA. Its business is anchored in a
strong “crop-to-shop” philosophy, having pursued vertical integration from the tobacco fields in the
Dominican Republic, Honduras and Nicaragua to its worldwide network of over 75 Davidoff Flagship Stores
that complement a network of strong Appointed Merchants around the world.

Founded in 1970 by gallerists from Basel, Art Basel today stages the world’s premier art shows for Modern
and contemporary art, sited in Basel, Miami Beach, and Hong Kong. Defined by its host city and region,
each show is unique, which is reflected in its participating galleries, artworks presented, and the content of
parallel programming produced in collaboration with local institutions for each edition.

Art Basel’s engagement has expanded beyond art fairs through a number of new initiatives. In 2014, Art
Basel launched its Crowdfunding Initiative, in collaboration with Kickstarter. This initiative presents juryselected
art projects to potential benefactors, which include Art Basel’s vibrant audience and the Kickstarter
community. The initiative has catalyzed much-needed support for outstanding non-commercial art projects
worldwide and so far has helped pledge over $1.4 million to creative projects around the world. For Art
Basel Cities, launched in 2016, Art Basel is working with selected partner cities to develop vibrant and
content-driven programs specific to the individual city. Connecting them to the global art world through Art
Basel’s expertise and network, Art Basel Cities supports its Partners to develop their unique cultural
landscape. For further information please visit artbasel.com