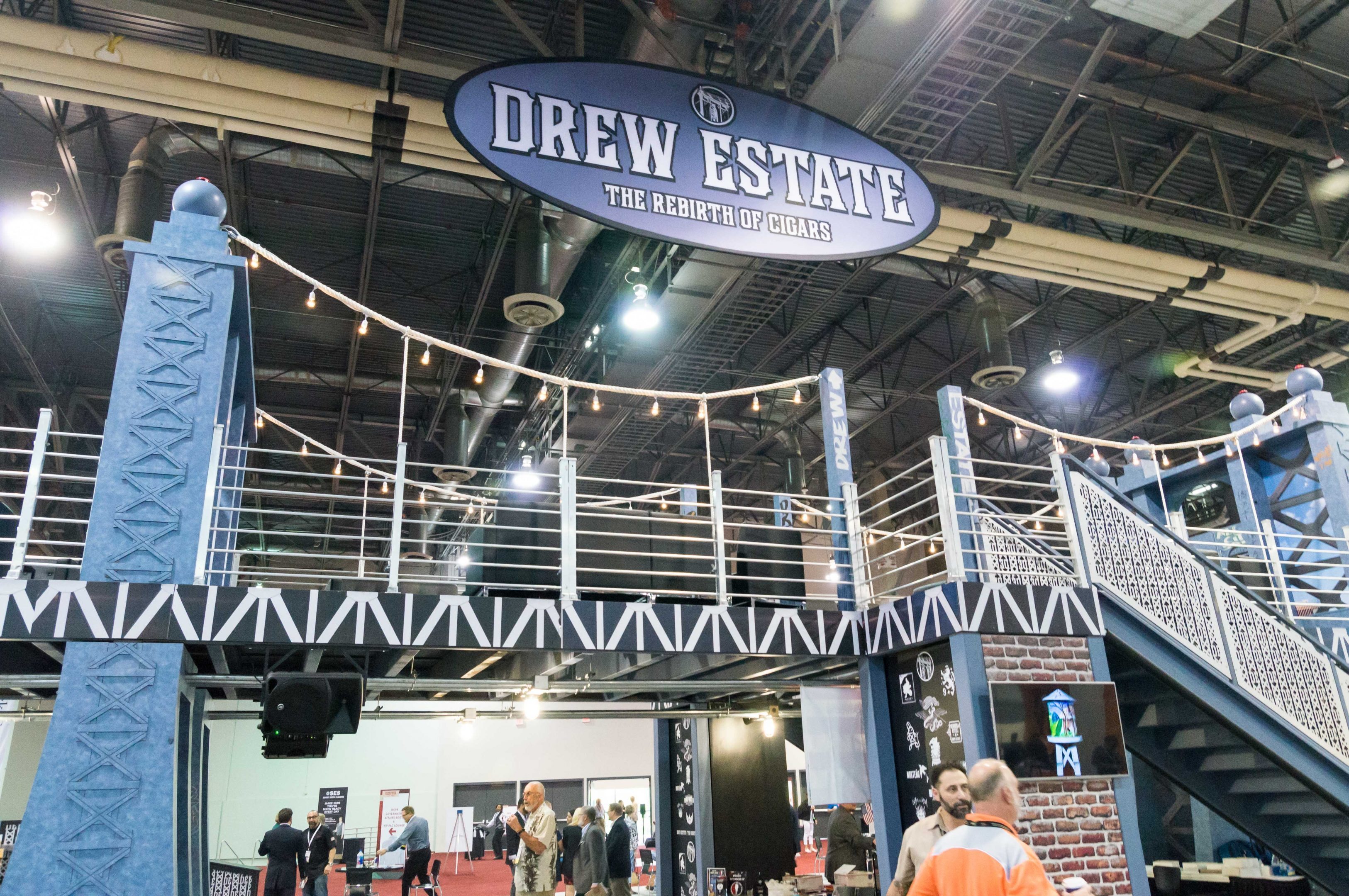 This year, Drew Estate announced ahead of time, everything new that they would be showing off at IPCPR. We will take you through each of them with pictures of how each was displayed at the show. Take a look at our 360 degree picture of their booth below. 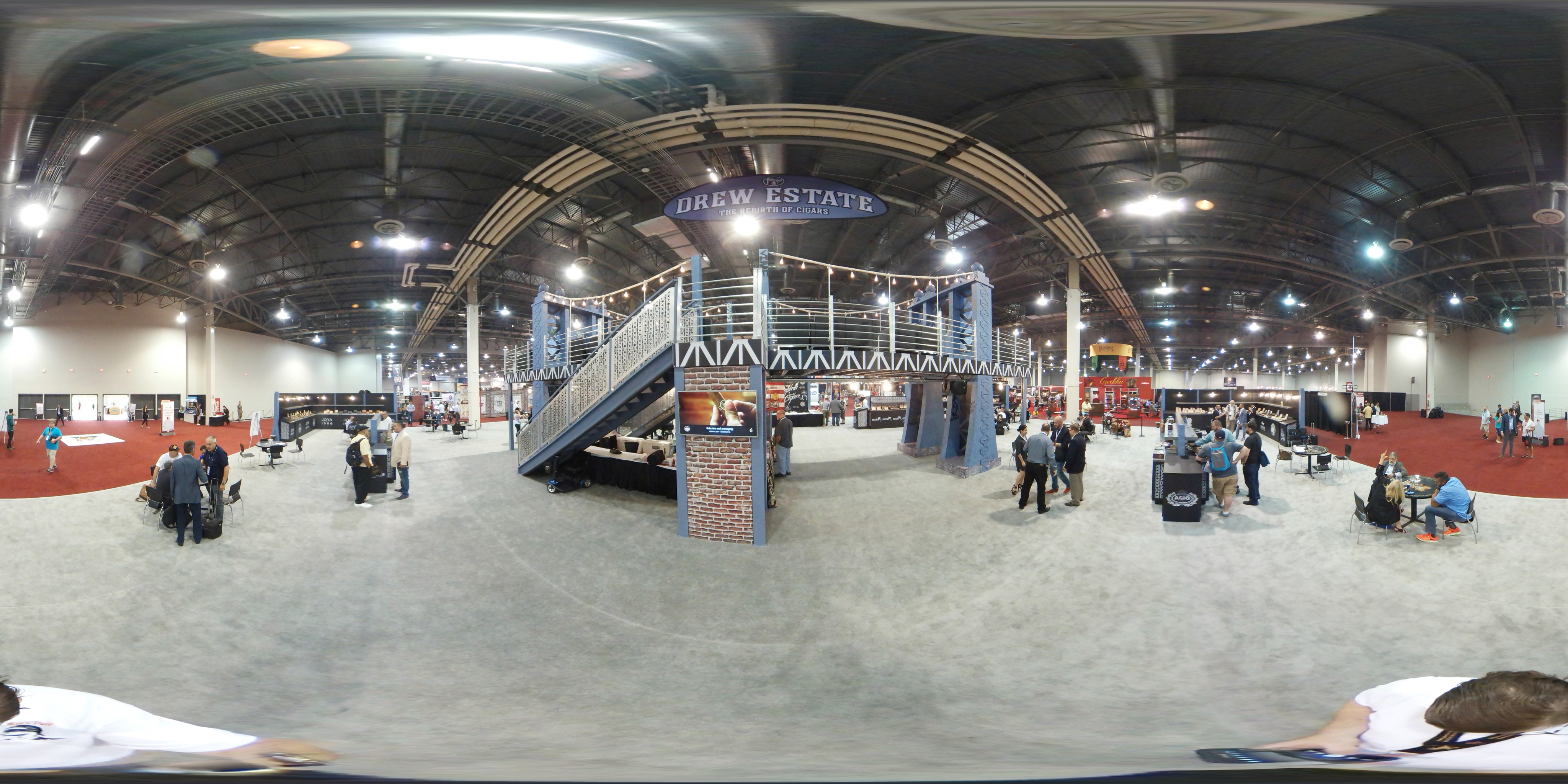 The first to be announced was the Kentucky Fire Cured Swamp Thang and Swamp Rat. line extensions. Drew Estate paired a sweet candela wrapper with the smoky & tasty Kentucky Fire Cured tobaccos, to make an  an eerie mystery to be revealed for a unique and powerful experience.

They were also showing off packaging updates to ACID at the show to their ACID Kuba Kuba, ACID G-Fresh, and ACID Krush Classic Cigars. LOUNGE’N with ACID makes the best events even better, recently drawing in a big crowd at the Essence Festival in New Orleans in early July. Future dates are on the calendar for events in the Atlanta, Charlotte and Miami markets. You can read the full article here.

Also among the changes revealed at the show were packaging updates to Tabak Especial.  You can read the full article here.

The next line extension for them is an exciting one to the Herrera Esteli line. The new Herrera Estelí Miami debuts in a 5 ¾ x 48 corona vitola packaged in 10 count boxes with an MSRP of $130.00 per box. The blend features an Ecuadorian Habano Oscuro Wrapper, Ecuadorian Sumatra Binder, and Dominican and Nicaraguan Fillers. The unique attribute of the new release is that it is produced at El Titan de Bronze Factory on Calle Ocho in Little Havana, Miami, Florida. Check out the entire article here.

Drew Estate Distributes Joya de Nicaragua and Debonaire cigars. Joya was showing off new packing for its Cabinetta line as well as their new Joya Black, a follow-up to the well-received Joya Red launched in 2014. This new blend continues efforts from the Joya de Nicaragua factory to introduce contemporary, innovative products to the marketplace. The JOYA Red was a medium-bodied, full flavor smoke specially designed and blended for the modern smoker. The new Joya Black follows in these footsteps and takes the experience up a notch by incorporating a dark Mexican wrapper and Nicaraguan fillers. “This is Joya de Nicaragua’s first cigar to feature a Mexican San Andres Negro wrapper. We have had these wrappers available for some time and we wanted to create a blend with rich Nicaraguan tobacco, yet without the overpowering strength. The result is a balanced, rich and pleasant smoking experience – the type of experience the new JOYA brand is known for as demonstrated by the release of Joya Red” said, Mario Perez, Factory Manager. You can read the full article here. Debonaire released a maduro version of their cigar.

The Liga Privada Unico Serie Velvet Rat measuring 6 1/2 x 46, features a Connecticut Broadleaf “High” Mediums Wrapper, Plantation Grown Brazilian Mata Fina Binder, and fillers from Nicaragua and Honduras. It is equally complicated to manufacture due to the signature fan tail at the head of the cigar. Check out the press release here.

Last but not least, they announced a collaboration with Caldwell Cigars called All Out Kings. The collaborative project was announced earlier this year at Cigar Federation’s Cigar Safari where Robert Caldwell, Founder of Caldwell Cigar Co., Jonathan Drew, Founder of Drew Estate, and Willy Herrera, Master Blender of Drew Estate, led the tours blending session where attendees collaborated together with Caldwell, Drew and Herrera to create blends and lay out the rules they couldn’t break.

All out Kings will be distributed in the United States by Caldwell Cigar Co. All out Kings debuts with Tobaccos from La Gran Fabrica Drew Estate in Esteli, Nicaragua including Connecticut Stalk Cut and Sun Cured Habano Wrapper, with Indonesia Sumatra Binder, and filler comprised of Jalapa Viso, Esteli Viso, Dominican C-98 Seco, and Connecticut Broadleaf Ligero.  All out Kings will be released in four sizes: Smash (5 x 52), Gimme your Lunch Money (5 ¾ x 46), Foreverlast (6 ½ x 54), and The Fourth Pose (6 x 54). The project is packaged in 20 count boxes. Read the whole release here.