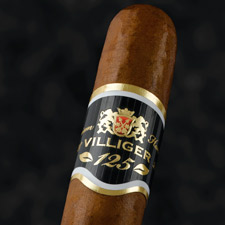 This year marks the 125th anniversary of European cigar giant Villiger Söhne AG, and the company is celebrating with the release of a commemorative cigar made by hand in Nicaragua.

The Villiger 125 will have three sizes. Roy MacLaren, president of Villiger Cigars North America, said the goal of the smoke was to “craft a premium cigar for the modern-day cigar smoker while honoring 125 years of Villiger tradition and heritage.”

The smoke is rolled at Plasencia Cigars in Estelí, Nicaragua, from a blend of Plasencia-grown, Nicaraguan tobaccos and a Habano-seed wrapper leaf grown in Ecuador. The bunch of the cigar is comprised of two binders from the Jalapa Valley, in northern Nicaragua, and a mix of Jalapa and Estelí filler tobacco.

“We use two binders to step it up a bit and give it more flavor,” said MacLaren. The company also used two binders on its Villiger Colorado cigar, which scored 89 points (for the Churchill vitola) in the February Cigar Aficionado.

When finalizing the blend for Villiger 125, MacLaren opted to use Habano wrapper from Ecuador’s 2009 crop rather than the older 2008 crop. “The ’09 crop was better,” he said. He describes the blend as “flavorful and complex,” and “not earth-shatteringly strong.”

The cigar comes in three sizes, with suggested retail prices ranging from $8.80 to $9.80 per cigar. The first production run will be 500 boxes of each size, for a total run of 1,500 boxes, each containing 20 cigars. Expect them on sale in mid-July.

Villiger sells more than 1.5 billion cigars a year, the vast majority of them small cigars made by machine. Villiger Cigars North America is a unit of Villiger Villiger Söhne AG, headquartered in Pfeffikon, Switzerland.