Back in June of 2016, Black Label Trading Company announced the release of Bishops Blend to be made at Fabrica Oveja Negra in Esteli. It officially debut at that year’s IPCPR Trade Show. Bishops Blend is available in limited quantities at select BLTC retailers and always sells out very quickly. It comes in only two vitolas: Robusto – 5 x 48 (20 count) MSRP $9.50 Corona Larga – 6.25 x 46 (20 count) MSRP $10.00. This cigar is unique in that it uses Pennsylvania and Connecticut Broadleaf in the filler. The end result is a very rich and intense flavor profile that highlights the Broadleaf but doesn’t overpower the Nicaraguan tobaccos. The Bishops Blend has a great balance between richness, spice and strength.

Last April, Black Label Trading Company announced they were shipping Bishops Blend vintage 2017 to select retailers that week. “It’s great to get Bishops Blend back in the market. This is a very special cigar. It is a representation of how I have grown as a cigar maker. I’m happy that the time and dedication that went into creating this blend has translated to our customers and made it one of our most sought after cigars. The 2017 Bishops Blend has an extremely rich and sophisticated profile. It is a bold cigar with exceptional balance and complexity. Subtle spice is combined with earth, bitter sweet chocolate and anise. The smoke is creamy and dense with a long rich finish,” said James Brown, creator of BLTC and partner at Fabrica Oveja Negra.

“This is an interesting looking cigar. The wrapper is not only a very dark brown, almost black, it also wraps around the foot. The cap is more of a cone instead of a torpedo shape.” –Eric (smalls29)

“This cigar has a ton of flavor and its quite clear from the very beginning that there will be good things to come. A savory leather is the mainstay flavor and is almost always present. It is accompanied by citrus notes on some puffs, or there might be a creamy sweetness texture change, or a bit of woody notes, or even some white pepper. As mentioned, the leather is pretty much always present, and the play of other flavors is quite nice.” –Isaac M. (The Nothing)

“The first puffs of this cigar were interesting. The initial flavor blasts were strong and smothered my palate with tangy leather notes. There was a faint citrus note as the leather faded that was a surprise. Through the nose the smoke is heavy in pepper and the retrohale develops a significant charcoal flavor.” –Jason H. (Jokey Smurf)

“Construction issues are becoming more pronounced. Lopsided burn threatened to begin canoeing. Quick touch up with a lighter seems to have corrected the issue. A hole in the wrapper and now burn issues. Oh, the humanity! On a positive note, the flavor is still really solid. Continued core flavors of well rounded oaky wood, pepper, and softening leather notes. What began as a brand new leather jacket is mellowing into an old worn saddle. Nicely done. As the final third wraps up, the burn issues seem to be almost fully correct. It’s off a bit and may take a little more lighter work, but within reasonable expectations. ” –John I. (John I.)

“The second, like the first, has a leathery profile. There was a creamy, white-pepper building that reminded me a lot of a chowder. The retrohale had a blend of white pepper and cedar which were quite strong and possibly too much for many people.” –Isaac M. (The Nothing)

“Definitely building in potency at the start of the last third. Some of the softer leather notes are dropping away and the pepper and earthy flavors are coming into the forefront. Toward the end there are also some notes of maple and cherry, or something fruitier than the previous citrusy flavors anyway. Well worth hanging around for. This is a nubber. ” –John I. (John I.)

“A nice blend of flavors that have remained consitent are a plus to me. The pepepry flavors did mellow a bit but remained at the forefront. The grass and bbq flavors remainined in the background providing a nice experience.” –Eric (smalls29)

“No complaints, good draw with slight resistance.” –John I. (John I.)

“This cigar burned well and had a very satisfying smoke output. It looked good, it tasted good and was very enjoyable.” –Isaac M. (The Nothing)

“The initial right draw impacted my rating a bit here… Otherwise the construction was spot on… Nice looks, strong ash, and a good blend…I like it” –Jason H. (Jokey Smurf) 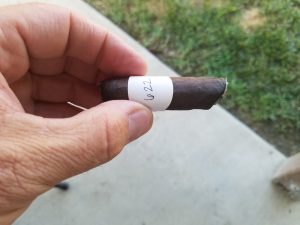 “Great smoke. The primary flavor profile pretty well nails what I look for in a cigar personally. Mostly minor construction and burn issues detracted somewhat from the experience, but the flavor and subtleties more than made up for that. I would happily smoke many, many more of these.” –John I. (John I.)

“This cigar was, well, outstanding to me. This is something I could enjoy at any time and could even be something that I’d smoke very regularly. The flavors caught my attention at the beginning and the constant evolution kept me coming back for more. It was a surprisingly long smoking cigar with made it that much better.” –Isaac M. (The Nothing)

“Even though the cigar started out a bit mellow, the increase in strength made for a nice, complex smoke. The peppers took aver about the beginning of the second third. It started off with nice flavors of grass and bbq which moved to the background in the second third. Even though the peppery flavors were predominant, it did not overshadow the other background flavors. A nice distribution of flavors and a cigar I would love to have in the humidor.” –Eric (smalls29)

“This was a flavorful fuller bodied smoke that packed a significant nicotine punch. The flavors are interesting and strong enough for the experienced cigar smoker. I would hesitate to recommend this to a new smoker, simply due to the strength. As a smoker who prefers to retrohale every couple of puffs, this one needed discretion as the pepper was significant and sometimes enough to make my eyes water. All of this being said, I enjoy a strong cigar and this fit the bill. I have a suspicion regarding what this cigar is…I can’t wait for the reveal!” –Jason H. (Jokey Smurf)

Blind Cigar Review: Black Label Trading Company | Bishop’s Blend Corona Larga
Summary
"This cigar was, well, outstanding to me. This is something I could enjoy at any time and could even be something that I'd smoke very regularly. The flavors caught my attention at the beginning and the constant evolution kept me coming back for more. It was a surprisingly long smoking cigar with made it that much better." -Isaac M. (The Nothing)
Appearance
93
Aroma
94
First Third
93
Second Third
91
Final Third
91
Draw
91
Burn
93
Construction
90
Overall Experience
95
93
Overall Score - Great